2013_12_11
Just a little update. During the last week I have had some help from Alan Jeeves and Roger Lloyd. And we got heaps of work done.
The first thing to do was for Allan and I to finish of the wiring leading up to Bullarto and cut and fit ply bases in. This took longer than we thought it would, but finally all was fixed down ready for the road base. 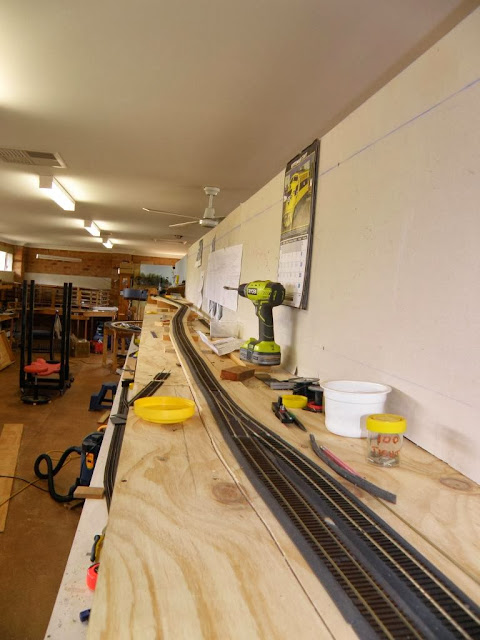 We then went on and fitted the backdrop to the lower level, which was good to see finished. Paint is what is needed now :) Then some photographic back drops!
On last Saturday I collected Roger from a late running train at Wangaratta. Chased the Up steel train from Chiltern, even got some video at Springhurst :D 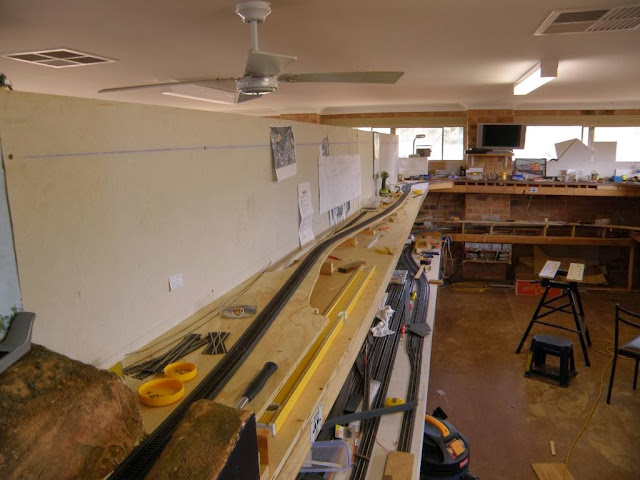 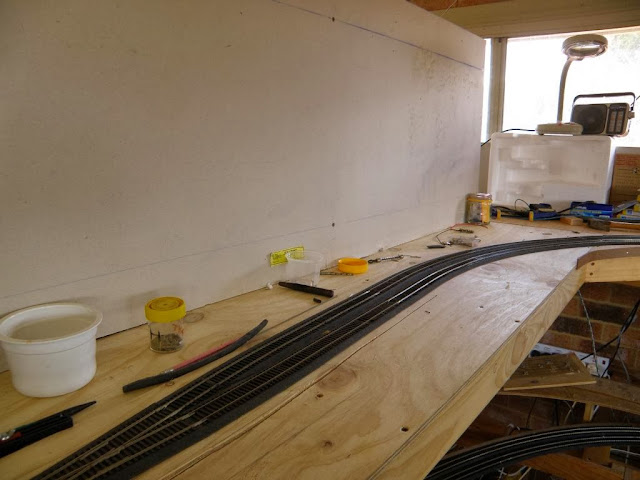 Then we got stuck into laying track up to Bullarto, and then Roger redesigned the cattle race for me.
It now is slightly changed from the original, but still retains the busy look, and will give lots of operational fun as both BG and SG trains can service the stock race.   Roger even came up for a way to simulate the two tracks along the stock platform. He did this using a gauntlet point at one end, and a length of gauntlet track. Ok its 4 rails rather than 3, but at least we still have only one place on the whole layout where vehicles can cross from BG to SG and back again. That is the Bogie Exchange
road :D  And of course this is a dead section of track, avoiding the problem of  someone driving a Loco through it. As in real life vehicles move through the shed with the help of the tractor or can be pushed with a Loco and match truck attached.
Cheers
Rod (pictures coming) 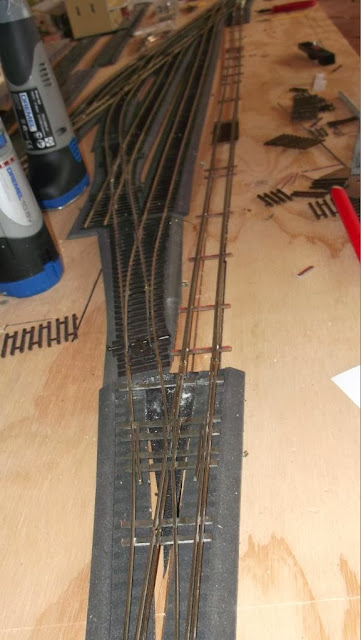 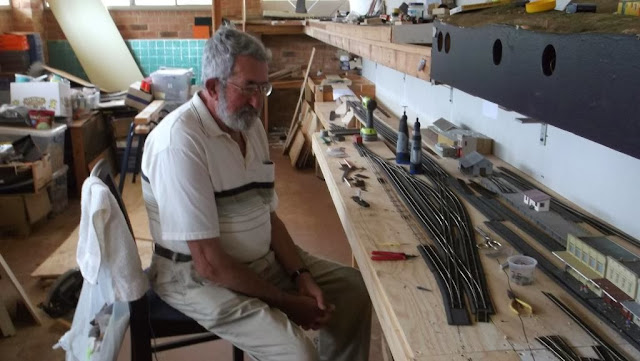 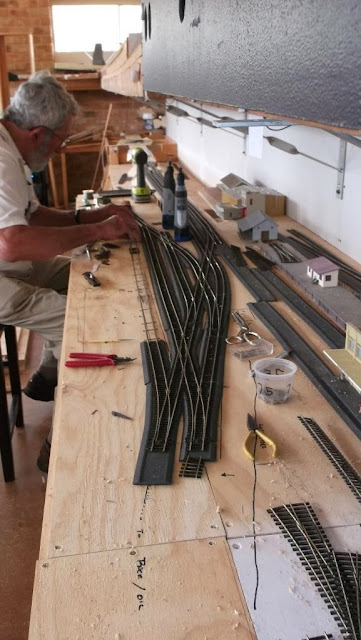 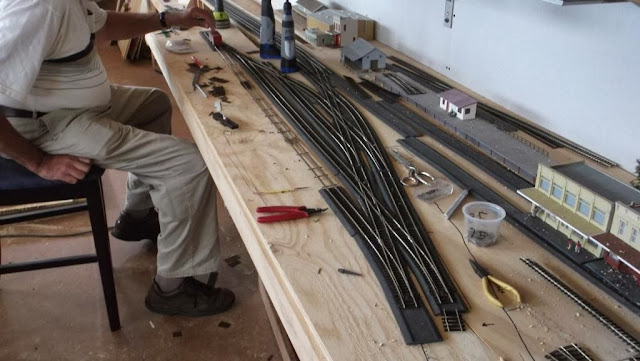 And whilst Roger was preocupied with the Wodonga Cattle Race, I started to do someting I am getting quite used to, Hey Al?
Demolition!! 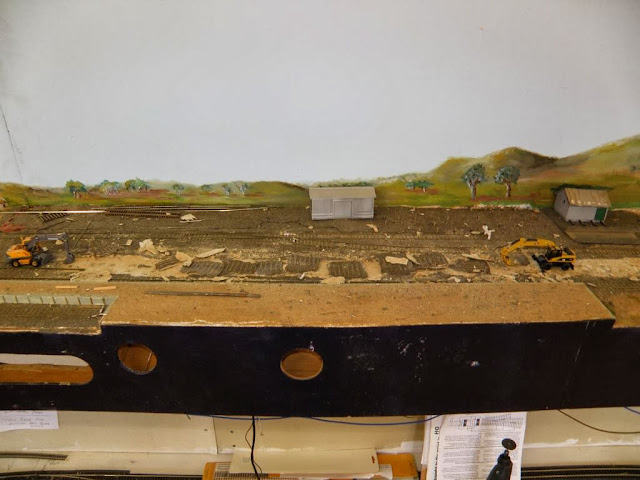 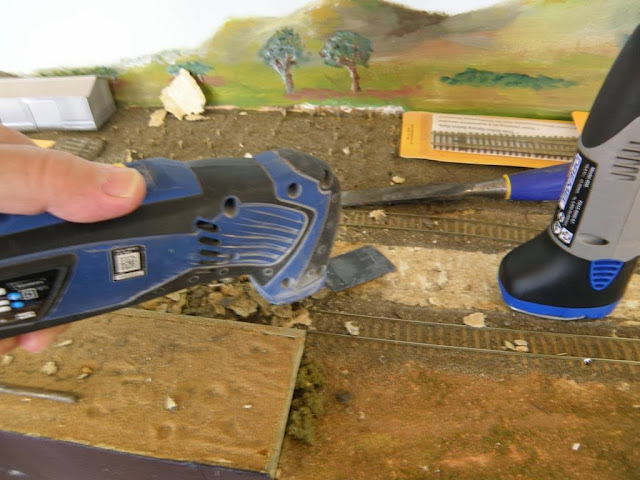 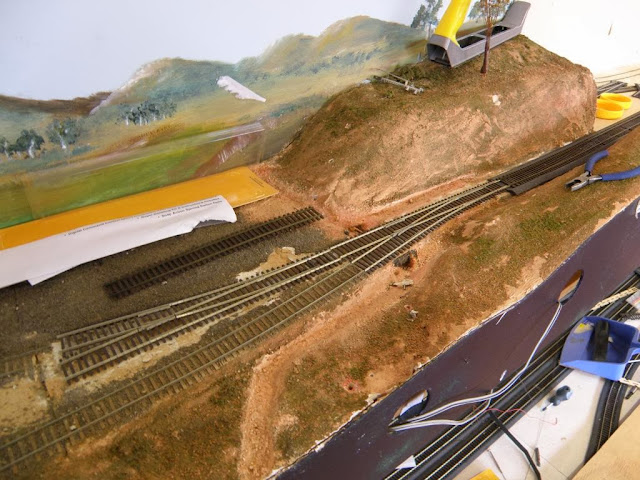 But of course I did get all the track back in along the rebuilt approach to Bullarto. All the points are ready to mount as soon as I get the track bed right and decide to do about the track itself. Trentham was originally built using hand laid track to very high standards. So much so that most of the points were not fitted check rails (which apparently was a modern invention to help trains negotiate poor track work)  Anyway the layout is now very old and the track work is now requiring an upgrade. So I have decided to replace all points and at least the track work in the platform,  and the through road.
We will have to see if that is enough. Perhaps I can use recovered track to bridge the old joins where the modules came together, which is still a major problem :D
(Originally the rail used was older profile N scale rail, which does not match up with code 70 or Peco N scale rail)
Cheers
Rod
Posted by comtrain at 10:27:00 am No comments: