lay track? ok we need to get ready some points, don't we? Points glued down and ballasted are always going to give trouble, so I have to wire them so they wont ;) 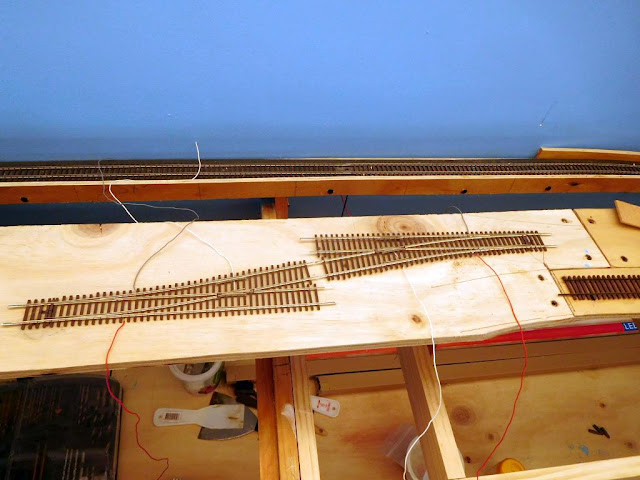 This is the Junction crossover going into Melbourne end of Honey Suckle. These are code 70 Micro Engineering No6 points. They are dead frog, however the frog can be made live with a little clearing of plastic underneath. Just looking here, I see a mistake already. I have insulated the frog rail approaches. They need power because unlike Peco  the frog is completely isolated (dead frog) Powering up the frog does not supply power anywhere else. Easy fix. 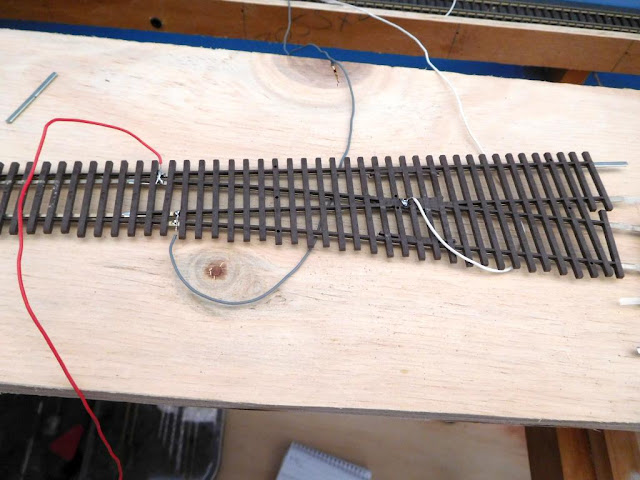 The white wire solders to base of frog. I simply ground away the plastic with a Dremel.
Now solder red and black (eh? grey today :)  ) to all other rails
And spotting those insulated joiners linking the points, and for these type of points only, I will replace them with metal and solder droppers on to power in between points.

So you think Peco Electro frogs are easy?

Ok Ok, you do know that Peco redesigned the released "electrofrogs" don't you? The early ones gave trouble and were fixed, and I have found a few original ones in my store, and I decided to fix them today as well. 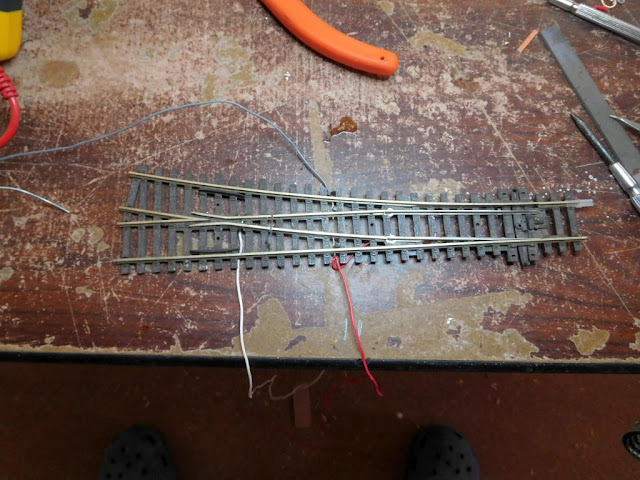 The new "electrofrogs" have jumpers that need removing for DCC. This one does not!
Also you will notice I have had to cut gaps between the frog and blades to isolate the frog?
Red and black (eh grey) to DCC bus, and white to switch the frog from switch machine or frog juicer.

But that's not good enough. 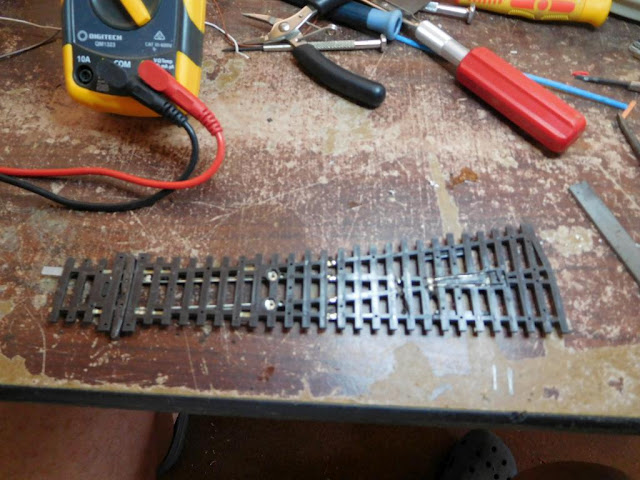 Cut and clear sleepers to allow linking two rails on each side and joining to DCC bus.
Grind away under frog and join a frog feed here making sure feed wires to rail ends remain attached, mine didn't. 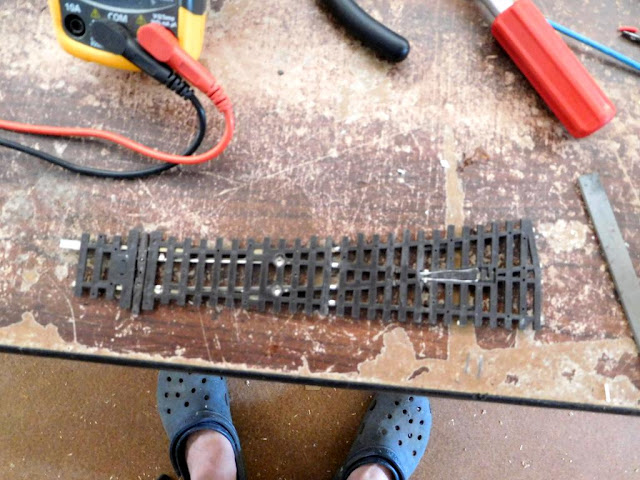 Is that easier to see? 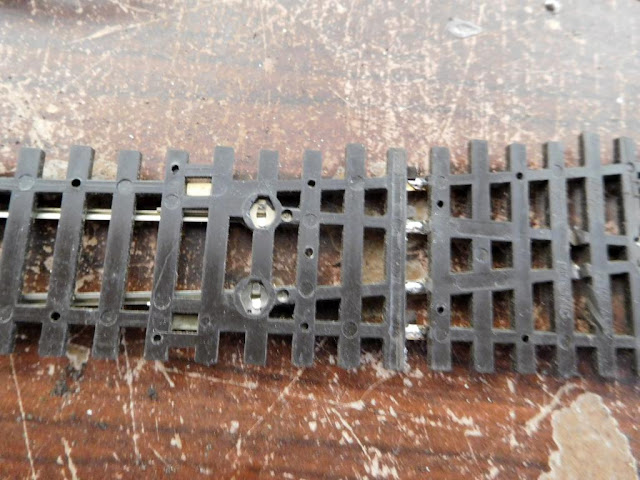 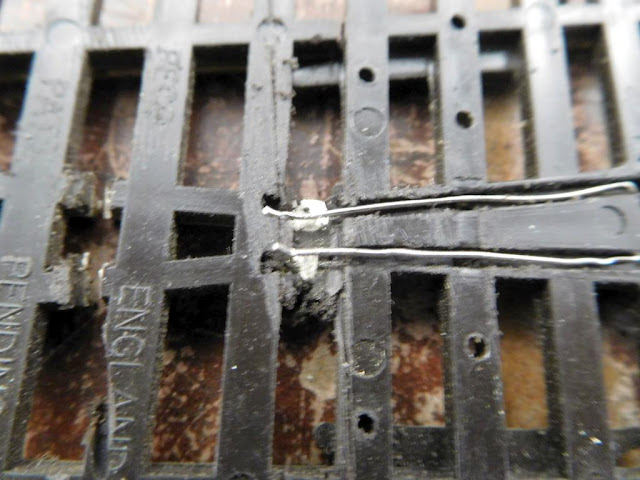 Their is a missing picture? must have been out of focus. I linked these two wires to the bottom of frog, and you can just see it through the plastic? I should not have removed it in the first place. The white wire was soldered into this link. Normally I would simply lift one the bridge wires with a flat head driver and solder the wire directly to it using the driver as a heat sink. Then prod it back into the grooves. 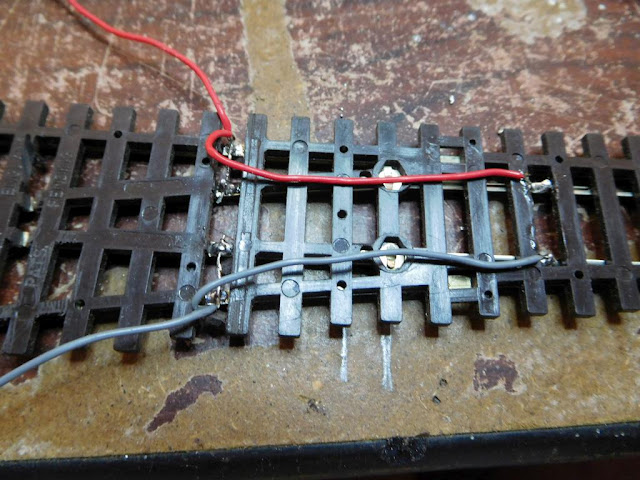 crap soldering not withstanding ;)  I now have DCC bus connectors to blades and all solid rails.

These lay on foam underlay and the wires are just cut into foam.

So I don't care if white glue insulates the blades. I only have to make sure it does not freeze them, and they easily move from side to side. Power will only fail if the wire (or solder) fails.