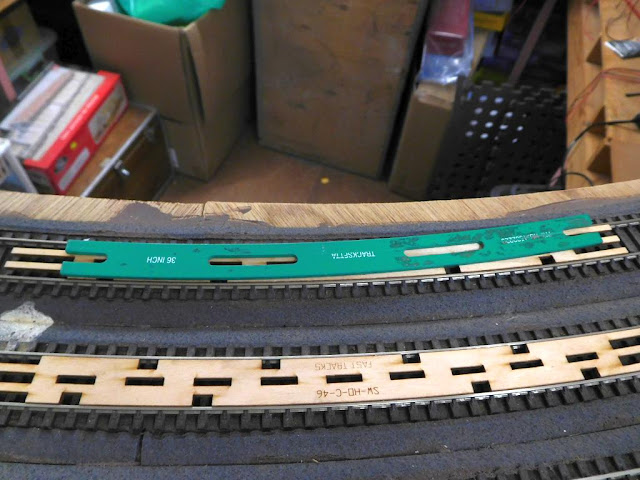 In answer to Tim's email, where he asked if my radii were indeed as broad as I thought  😏 I think I have that covered. I use Fast Tracks specially cut radii tools. They were made for me at 44 inches and 46 inches. On the branch, I try to keep the radius at 36 inches where possible, using the green tool. 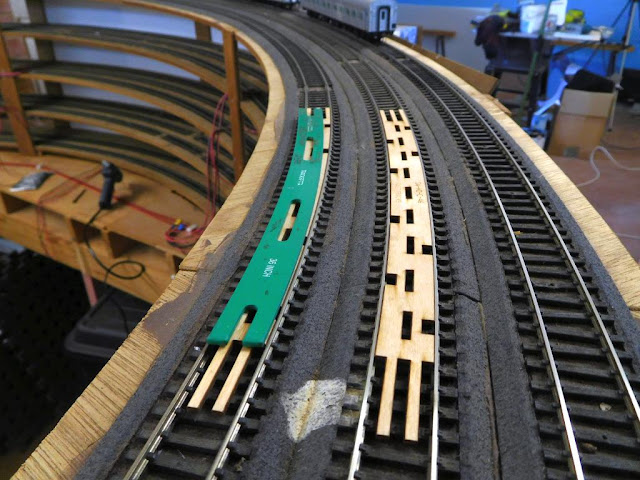 And so 44 " and 46" and 48" on the Helix. The 48" was laid using peco parallel track tools fixed to a block of wood, and later adjustable tools bought from Prose's in Turkey. 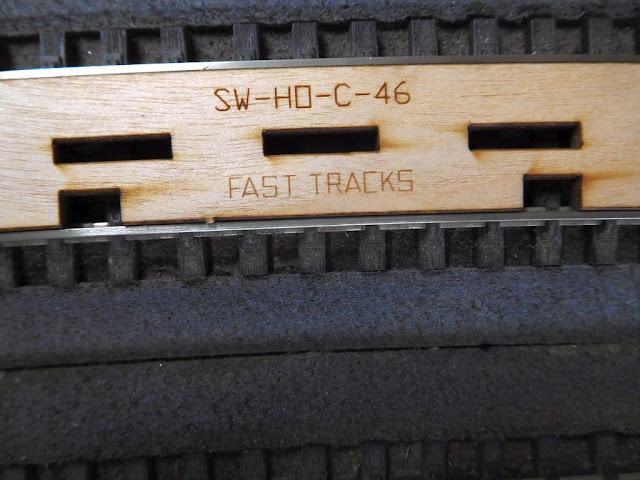 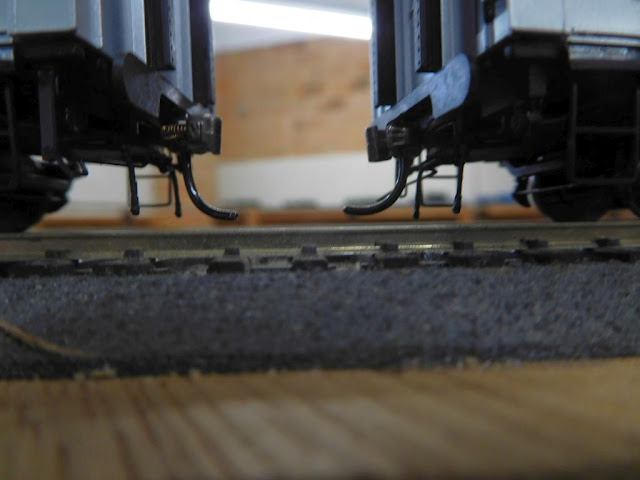 pin heights all adjusted (But something is hanging on left. A coupling hose. Must bend it away as it might be fouling coupler? Also right hand car has a coupling bar looking to be fouling?? 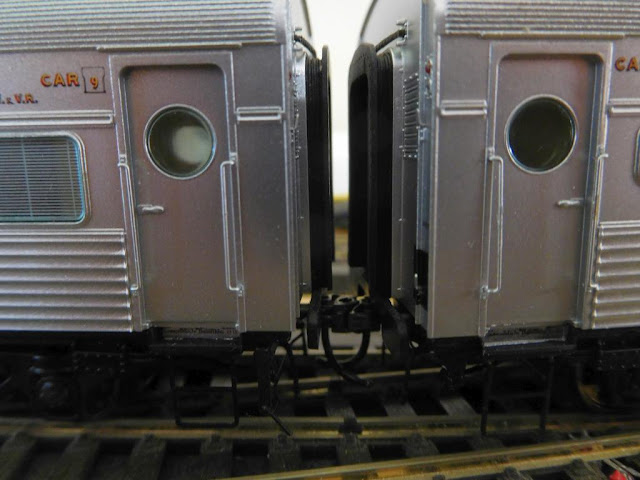 The shortest radii will be the points and crossovers, all no.6 But seems ok here. 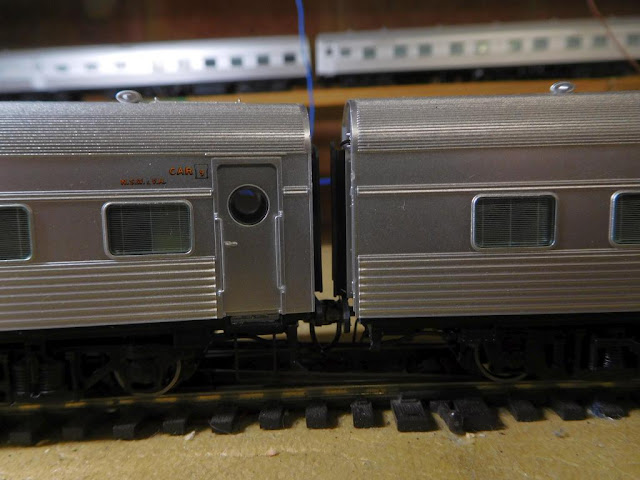 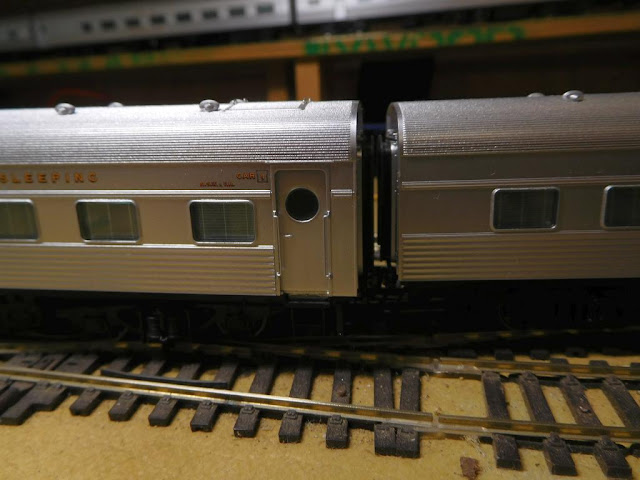 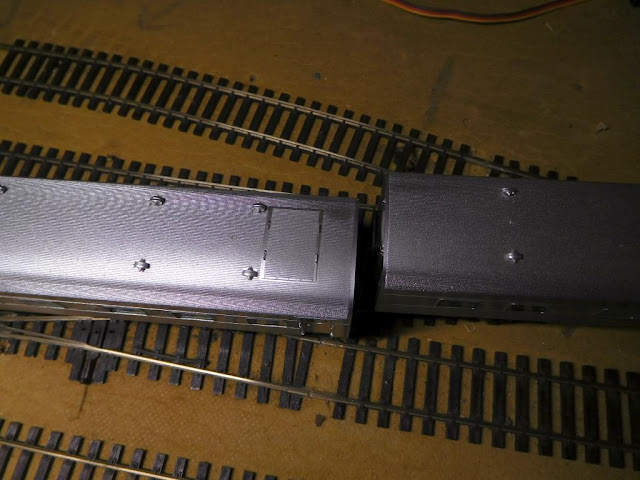 clever design by Auscision and their Chinese engineers, don't you think? Pity our 1/87 scale  passengers though!
Cheers
Rod


I had an hour or two in the Train room today and tested the "roarer" cars some more. One of my readers sent me an email with suggestions how I might overcome the derailments.
First thing I noticed was that all coupling pins were at two different heights, however none actually hung below rail height. But I did adjust the lowest ones to match the higher ones.
Alas train still derailed.. Hold on! The same three vehicles kept derailing the rest were just fine.
Ok so I ran a mixed train of freight vehicles with RP25/100 and RP25/88 wheels, short 50 footers and long 80 foot flats, some light some heavy. This train circulated with out problem
I followed it with the "roarer" cars which derailed at about 15 locations.
So I started to check the track.
Yes they were derailing at the same place. Like I said 7 vehicles ok, 3 would derail, but not (all) at the same place.
Started adjusting track. Used packers, adjusted curves and in two cases replaced insulated joiners which were not holding track together perfectly. The joiners were soft creating out of alignment issues in height and line. New insulators fixed this problem. Still working on repairs for other spots.
The track seems to be ok for most vehicles. The Aurora is finding the faults though.
Pictures(to follow as I left camera in shed)  will show the radius tools I use as well as the gaps for diaphragm and buffer plates. They like the 44" and 46" radii but also navigate the #6 crossovers without derailing. Not a good look but congratulations Auscision for building cars that close couple and still navigate through crossovers!!
Cheers
Rod
Posted by comtrain at 2:18:00 am No comments: