Today I ran the heat for two hours to see if it was going to be ok.
At 8.00am  the temp was 5C higher than usual (3C), possibly because it has rained for last three days.

At midday I was able to get into shed, and I turned the Air-Con on and set it to 24C

An hour later the interior had climbed from 8C to 18C  and was comfortable. It was hotter near the ceiling (of course) but strangely 15 m from the air-con was the warmest part of the building. I set the ceiling fan to winter and turned it on low and was able to work comfortably for another hour.

The outside temp had climbed to 10C and the inside was 19.5C

So I turned the Air-Con fan to Auto and lowered the temperature setting to 18C on the unit.
An hour later I felt the temp was still climbing ??
With Air-Con set to 18C the back of room was at 21C, but it felt more comfortable than before.

And so I stopped the Air-Con for a minute and then restarted  it, and noted that  it now ran quietly with fan definitely running slower, The temp maintained 20C for an hour and finally settled on 18C 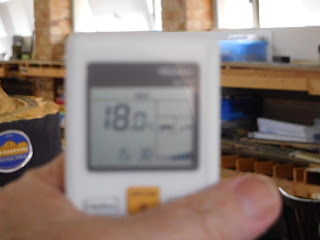 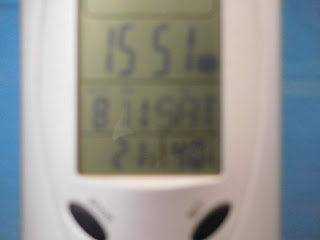 Electronic temperature showing 21C at back of room

Had difficulty focusing camera on screens.  But think the Air-Con settings were not running on Auto mode, or forcing the fan to run on max, was the problem?  I should not have a maintained 21C with the Panasonic 9kw unit set to 18C

Pretty happy with that.  So Al,  Peter and Graeme we have warmth at last :D

Going to be in the hands of my Doctor for a month, and hopefully back into things after that.
First problem is diabetes which is not really under control. Not enough exercise is my analysis.

But mainly its my eyes. I have Macular degeneration in my left eye and mild cataracts as well. Although my right eye is ok, the left eye was always dominant for me, and it had been causing problems since 2013. Probably a good reason why I have slowed down. Well add that to the Hot summers and cold winters up here?
Since 2013 my Macular has been treated (I found it virtually the day it happened)
Fortunately they were able to fix 90% of the problem with an injection that
dissolved a burst blood vessel in the iris causing the vision defect. I could not
see straight lines with that eye.

The problem was discovered when my friend Roger was helping me lay track on the Wodonga Station yard. We went inside for the night, and next morning I went to the shed to find the straight track we had just laid looked like an earth quake chart! Or a picture of New Zealand main lines after such an event.

Roger had no idea what I was going on about, eventually I closed  one eye, then the other and worked out it was a medical problem.

Took me two weeks to get an appointment, and it was fixed as best as they can that day with an injection. I get another injection every 10 weeks, for life, or until they find a real fix for the problem.

So hopefully with two new lenses fitted in September, I should be back to work in
October, all being well.
Cheers all
Rod Young