I repaired the Wanganella storage Loop and rewired it. Set up new circuit breakers and got it to run really well. Its also two long reversing loops, to enable me to approach from either end into separate roads (of course). Really happy with how neat it all turned out.

But when I tried to run through into Wanganella, found a huge power drop on entering the yard. Not sure what I had done to cause that, but either side of the station in new territories the power drop was not present.
So lets have a look and see what we can find...
On top I found one metal fish plate that just might have let power slip through and short, but could not figure out why the short was actually a brown out? Replacing it with an insulated joiner did not help, only isolating a piece of track, which had a dry solder joint feed. Easily fixed, but brownout still happening.
Time to go underneath.....  oh sheeet!! 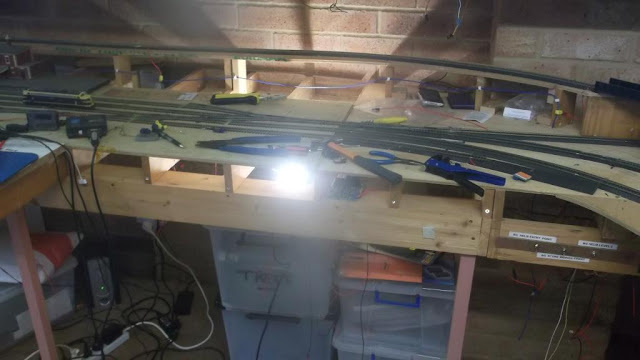 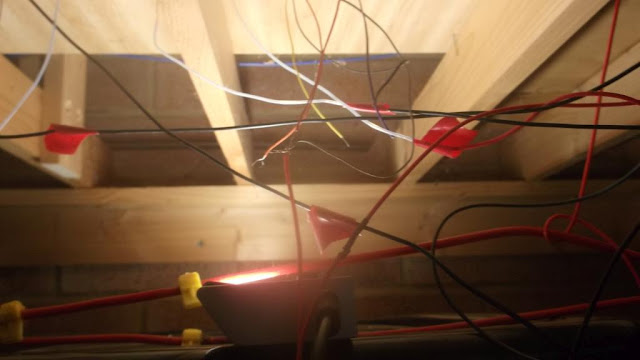 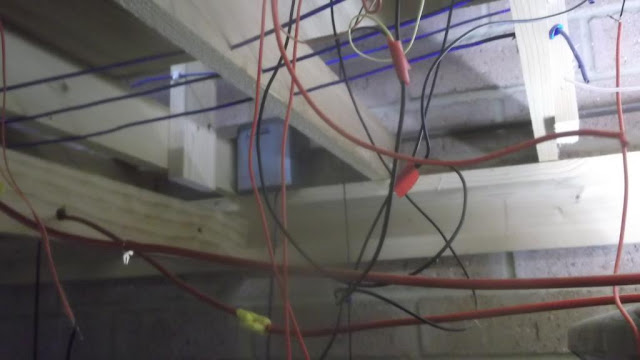 Well I did warn you all once before that I was just an old bloke having fun, and showing you all, no matter how many skills you migh have, or might not (my case of course) you can still build a model railway :D

Now Wanganella was the first bit of track I actually laid, way back in 2008 (?)  And I spent a lot of time getting the track right, but it took a lot of time to figure out how to wire it all up.  I used Peco code 75 electrofrog track and as previously shown, I connected the live frogs, blades and rails all up through slide switches, or hex juicers or point machines. With three double slips and a three way point, as well as several simple points, their was going to be a lot of wiring under here.

So what happened was I temporarily linked up all the wires and kept changing things until it all worked...  and then went away for 7 years and did other things.. and blow me down!!   It kept working!!  Go figure :)

So now its time to work out what this mess does and fix it with a permanent (neater) job
The photos were taken after I had already cut away half of the birds nest, so these are actually a sanitized view :(
So how many jobs have I got on at once? Dont ask, but I did get sound into a Trainorama 830 and an Auscision 421. I also started putting sound into an SCT G Class, as well.
Back into the shed, to take on my haunting punishment :(
Cheers
Rod
Posted by comtrain at 12:30:00 pm 1 comment: