Well despite working two days to finish the walls, I was still putting the last noggin in when Al arrived from hs home in Corrowa.

So we had to locate the top level horisontal supports fit the insulation and haul in the plaster. Easy job, huh? 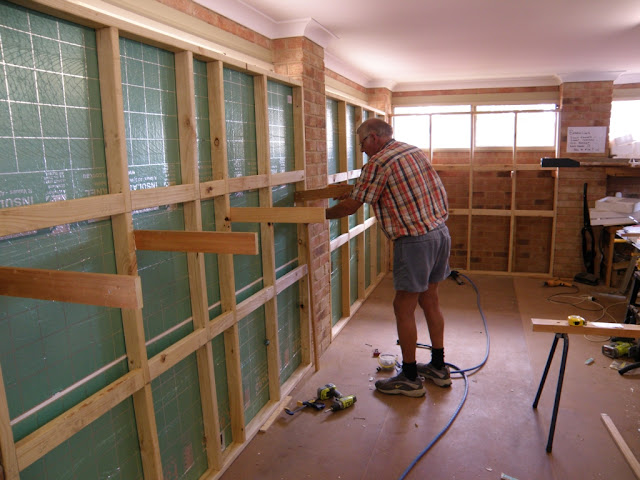 So fit the horisontal supports, remove frame from wall, cut out the insulation to fit and glue it on the frame.
Replace it all and refix it to the wall. 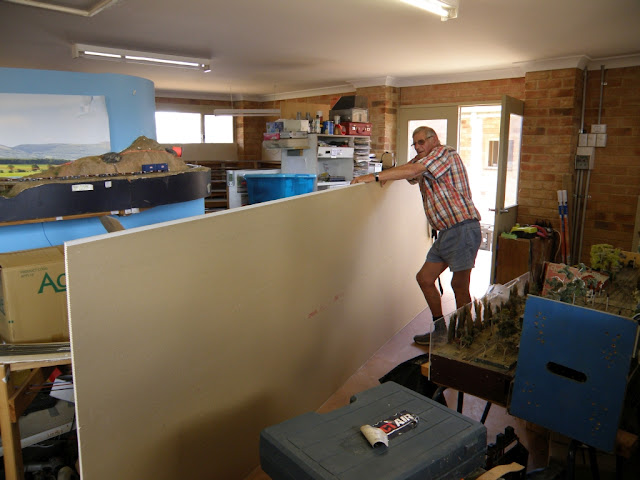 I'm sure Al is saying "never again"
The first part went smoothly, and I had told Al the plaster sheets were not too bad with two lifting..
Reality was that I could hardly lift my end of the sheet, and had to make a sling to even get it off the ground. So what happened?  I helped the driver lift the 6  sheets of the truck and had no trouble carrying them 35 feet and stacking them against the wall. Simply with my arm over the top and lifting and walking it.
A few days later I had to move the stuff into my garage and tried to do it on my own. I could move it, but it was too big a job. My son helped me get it into the garage before it rained. Today Al had his end up but I just could not move it without the sling. Now the sheets were as I said before 6 m long. And they were facing the wrong side. So finally we got it off the ground, marched out into the yard and turned the sheet around. We could not just turn the sheet over because one edge is thinned to allow you to tape and  join two sheets.
Now the problem was to get the 6m sheet into the room. We finally walked it past the door lifting it over the steps, poking it through the gate and past the hot water service. After a rest we bent the sheet into an S and walked one end through the door whilst lifting the other end three feet of the ground to clear the steps.

So having another breather. Al has a bad back, and this did not help it much for sure. Have no idea why I was so unaffected by the last two moves. But it sure hurt us both this time. 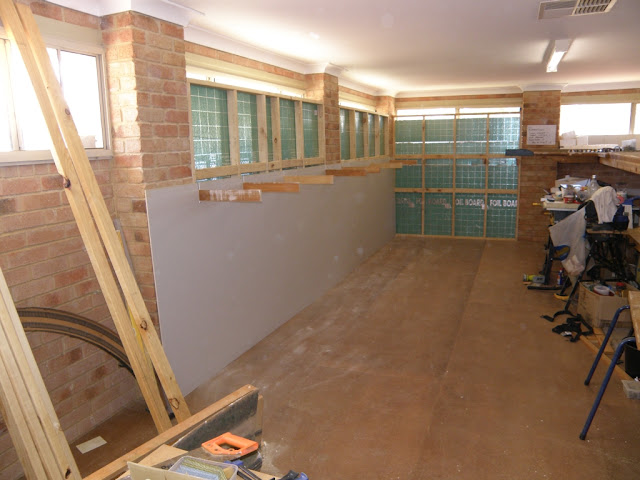 We now had to cut the sheets to allow for the supports. Stuffed that up as well. We did it by eye almost got 6 right, but one was really out. Nothing that bandage won't fix though Ha Ha.

I guess I thought we would have got both walls lined with plaster (as far as the frame went) But the 6m sheets are just too hard to handle. Might have to cut them down in the garage next time.

Thanks Al (Pal)  I really appreciate your help. I assure you I aim to get trains running one day ;)
Cheers
Rod
(convalescing in his recliner for at least two days, I'm thinking :)