So what has happened?
Hobsons Bay Easter 2014 Exhibition has run extremely well.
Couple of special meetings at Hobsons Bay sorting out the Club future.
Finished up taking the train to Melbourne Sunday for the last one and returning same day1..Too old for this ;)
Murray Railways Modellers Exhibition for 2014 has come and gone...

Bit of Track laying.....
Still working on the wiring ......
Burnt out another bogie. This time a Y class. Melted a gear and needs a replacement.

Worked out how I shorted out the Y Class.
Turned out it was the second engine in a consist and it pushed the first loco into a dead section of track, and then sat a wheel on the rail gap.
I have a Digitrax system which usually will protect the loco by shutting down. However this insulated section marked the entry into a district operated by a second DB150 control station. So far so good you might think? However the second DB150 was found to have been wired incorrectly. That is the DCC ring main was reversed, connecting black to red etc. Now how the hell did I do that?

A full check on the whole layout found some other minor errors too. Anyway all is good and the Y Class that hit the floor a year ago will be the source of a new axle to get Y139 back on the rails.

So now I am back into rewiring the Wodonga Yards, I might as well keep going :)

Last week we accomplished two jobs Jim and I got rid of the store bought brackets supporting the top level of the center module and that opens up the opportunity of finally wiring up the tracks and getting both stations operational.

The second job was done when Al came to give a hand. We widened the Coal Siding to help fit in the rest of the Shell Siding and add the Super Siding.

Here I show a few pictures of the goings on at my little railway.
And only a few meters of rail to lay before trains can circulate as well :D 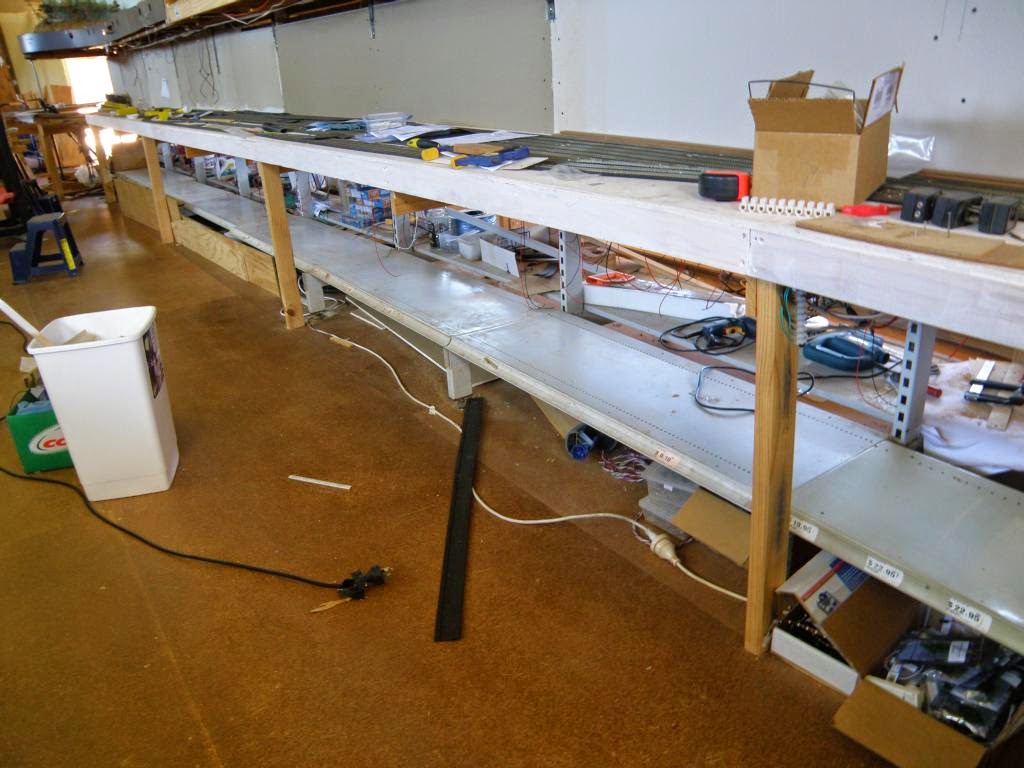 The other day Graeme and Norma came up from the smoke for a visit. I was telling Graeme how difficult it was becoming for me to wire up the undersides of the yard. Imagine if you will the bottom shelf as cluttered as the shelf on the other side?
Norma brought us in a cup of coffee and heard the conversation, and says quick as you like... I don't really see a problem!  Just clean the junk of the shelf and scoot yourself along underneath. I think your arms will be long enough to easily do what you need to do. Don't you think?  Well Graeme and I just looked at each other and back to Norma..Why didn't we think about that? :( So the deck is cleared and I have scooted the length of the boards several times and it works well. Guess we were too close to the action? Or maybe not close enough? A real Duh!! moment for me at least. 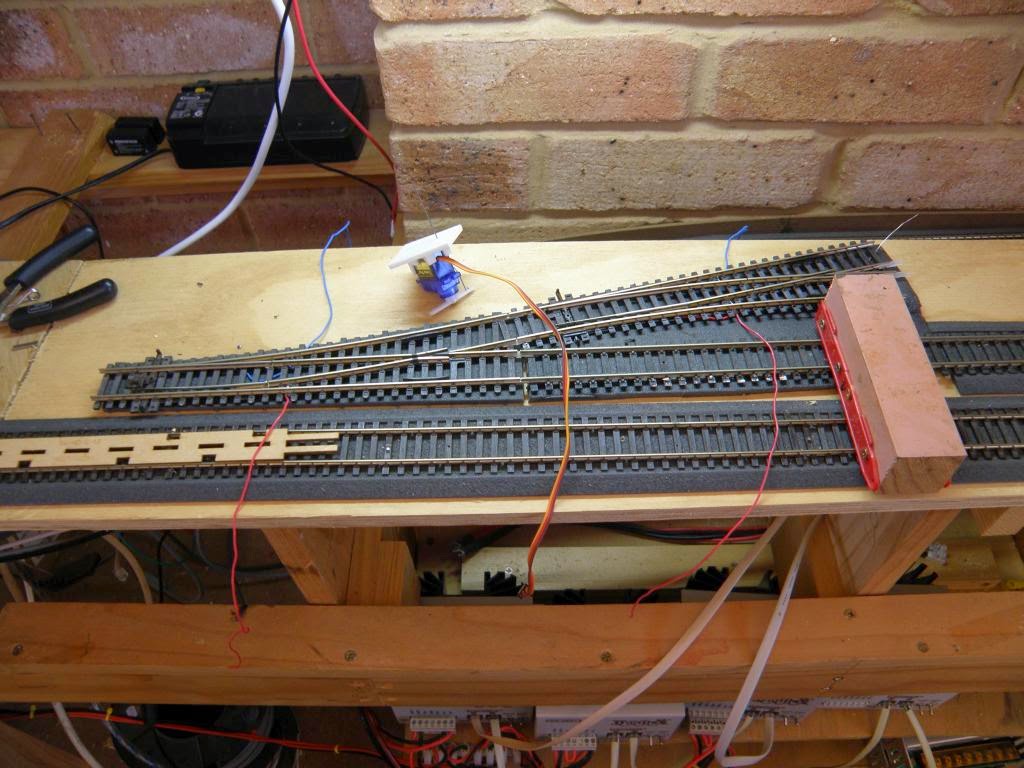 Whilst Graeme was here we laid down the SG loop and the BG. All I need to do is wire in the loop points and the cripple road on the SG. 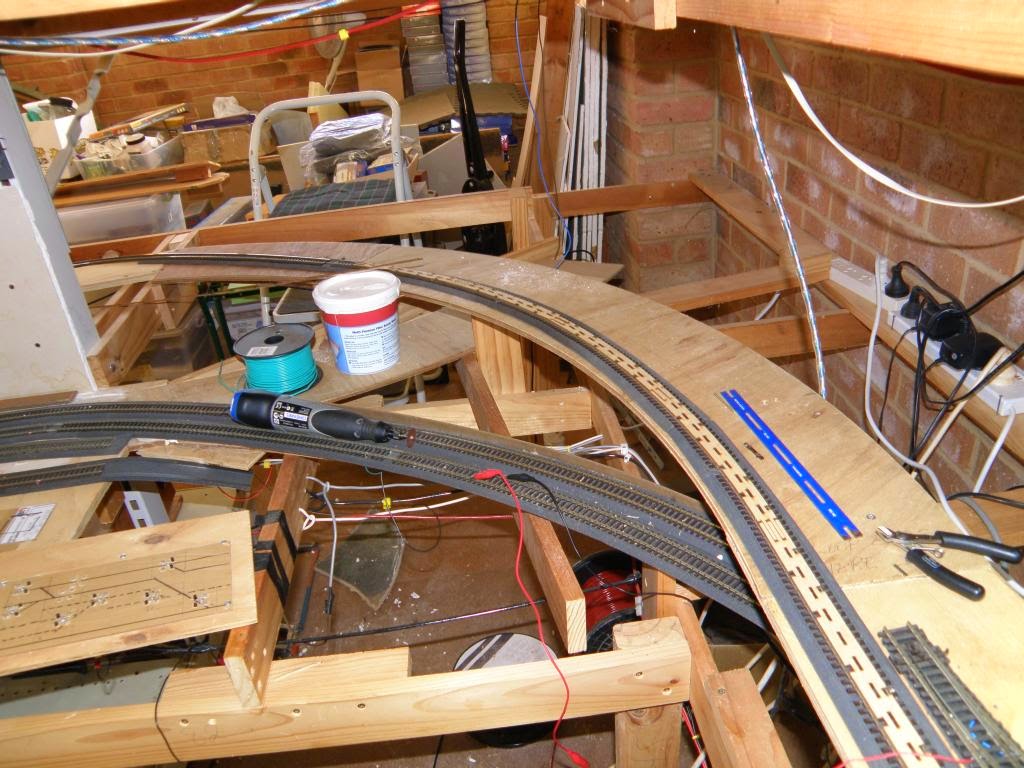 The BG is linked into Wodonga, and all I need to do now is fit in the three roads through Wodonga Station to complete the first full circuit of the Railway. About three lengths of Peco to complete the loop, about 8 lengths to get sidings in Wodonga, to make it reasonably operational. Remembering the Coal siding at Wodonga has only one entry facing Melbourne. Trains are hauled back to Wodonga in most cases before departure, although Melbourne trains can arrive straight in. Wodonga Coal siding has been widened to allow these arrivals. 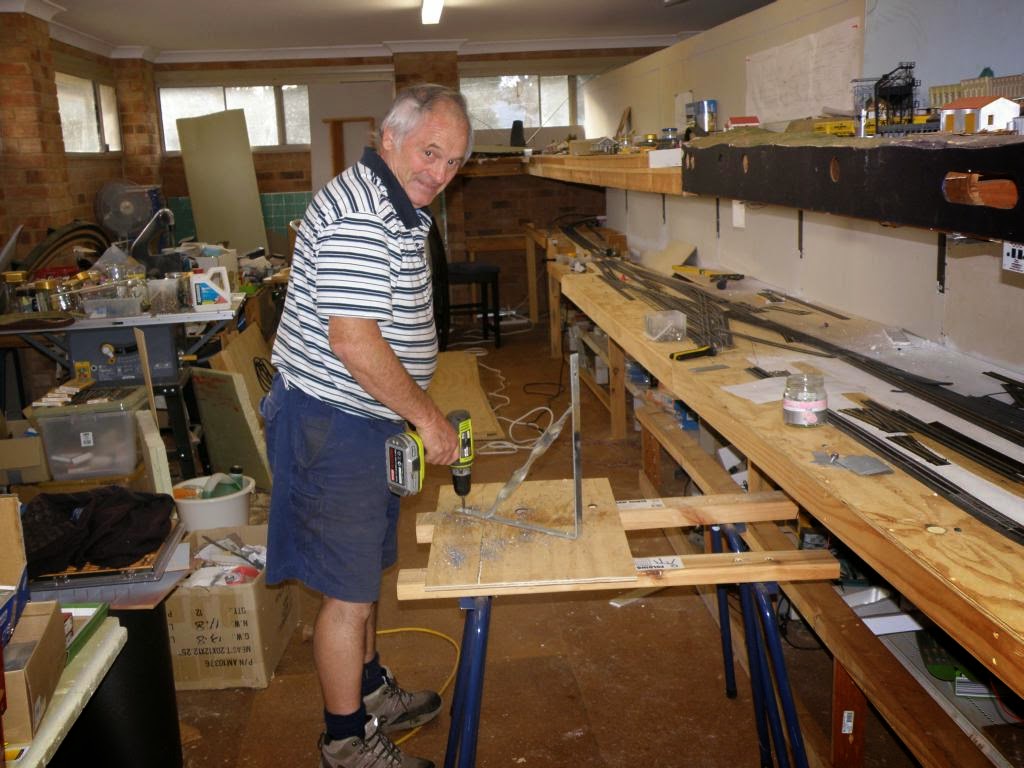 My mate Jim, made up some new brackets to replace the eyesores I bought from Bunnings, and they work just fine.
Here Jim poses with one of the old brackets 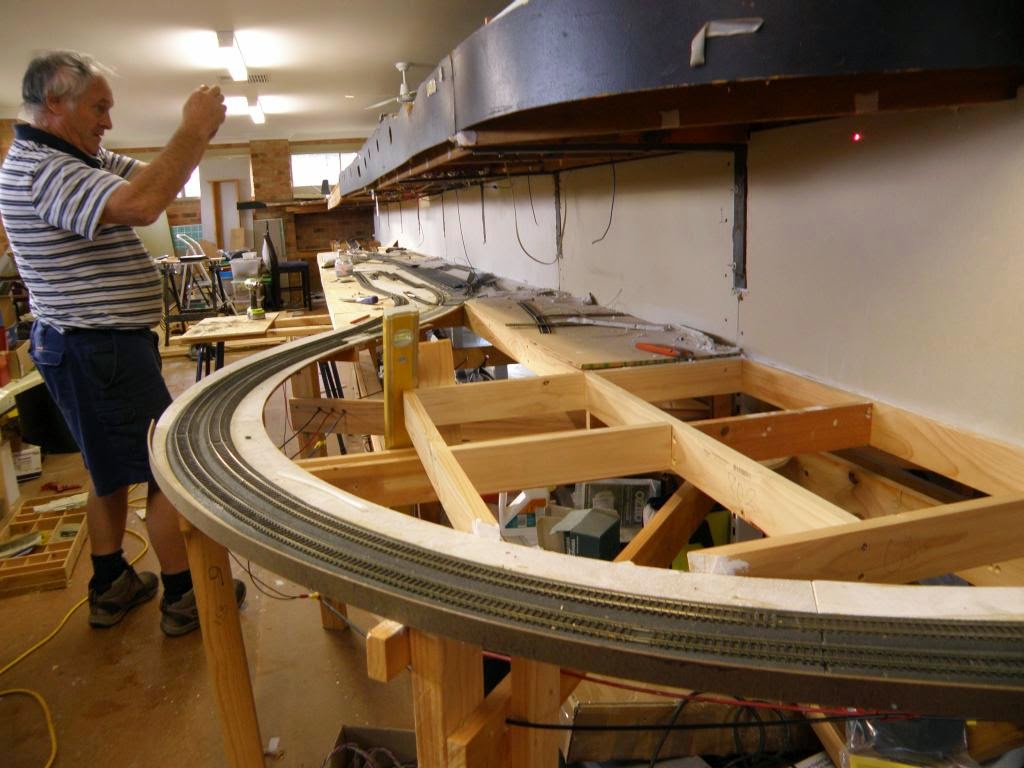 Jim takes a few pictures whilst I admire the new supports. 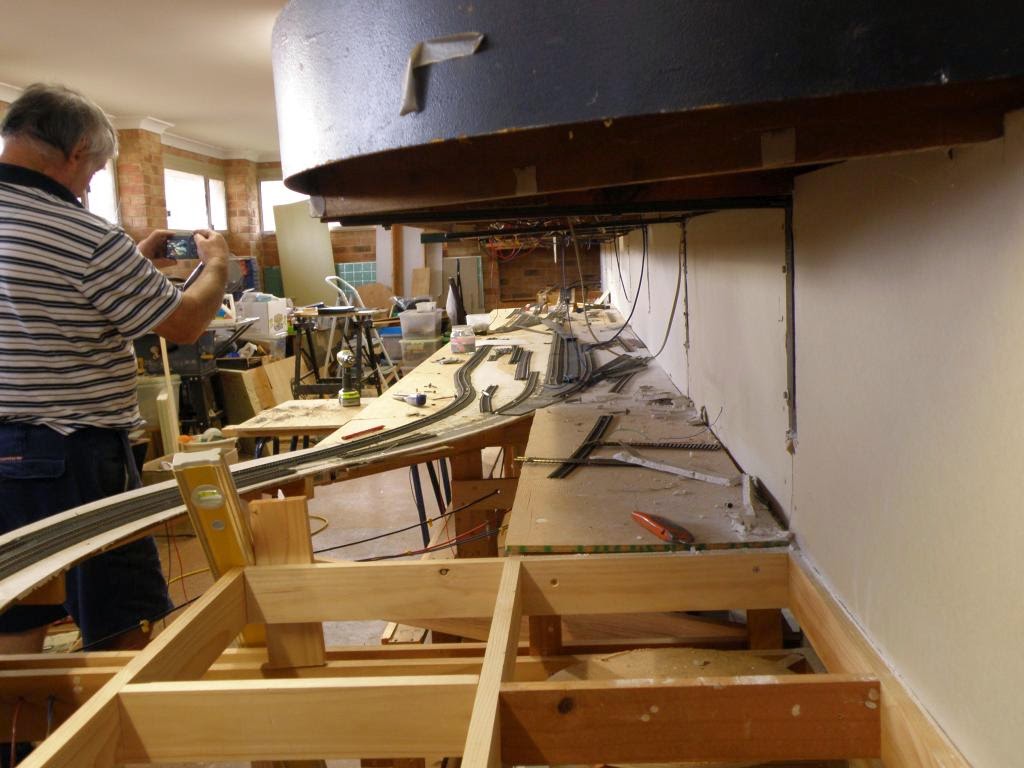 *This picture tells a lie :) Their is no slope at all, the bubble on the level sits plumb in the middle ;)
The supports will be almost invisible once I plaster over them and prepare the back drops. I can now string in my LED lighting as well.
The supports were built to collapse slightly under the weight of the upper deck. It seems to have worked out almost correct in all but one case. We will heat it up and add another few degrees. But the layout is held very nicely and these supports stay under tension. I just saw those fastening heads. Need to replace them with countersunk screw heads before I can plaster over, I guess. 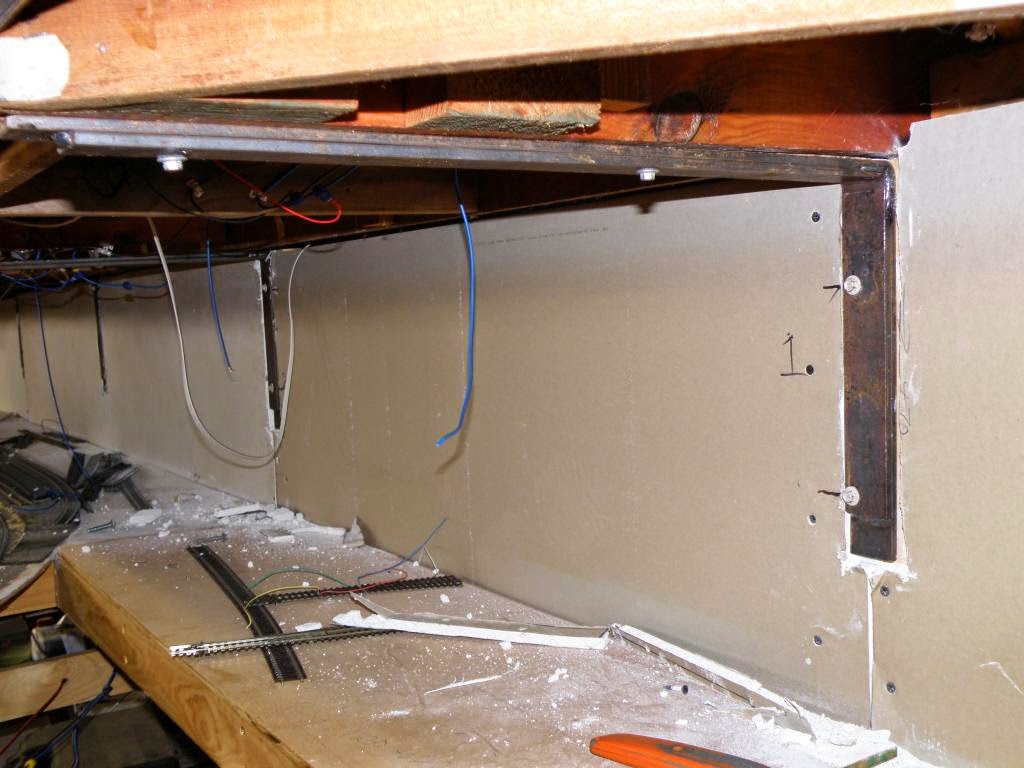 Jim welded up some new brackets and we just finished installing them. The posed picture shows the old brackets which did look pretty awful. 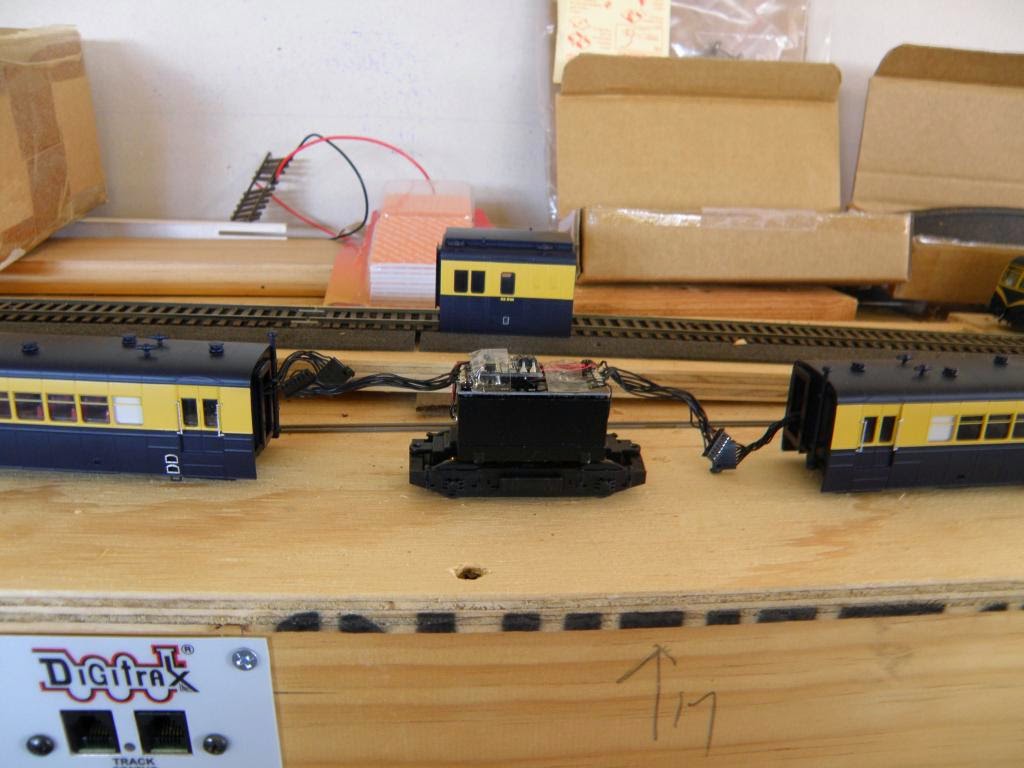 Interruptions...  I got a new Walker and it needs a sound chip. Its here and all it needs is to be fitted :) 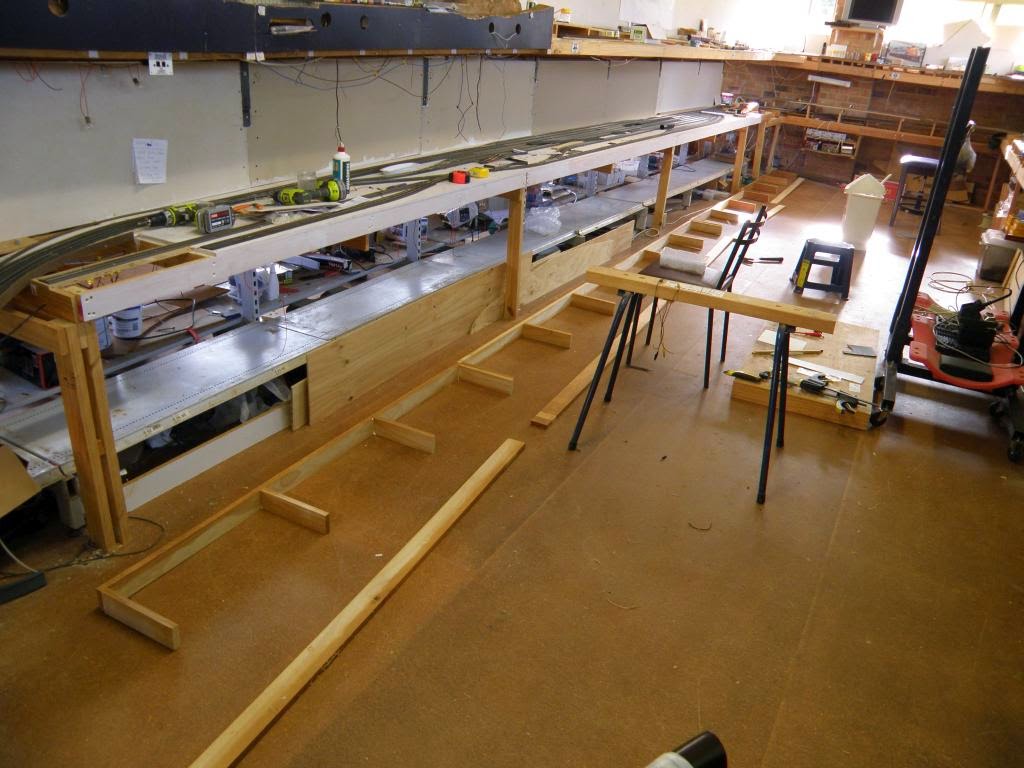 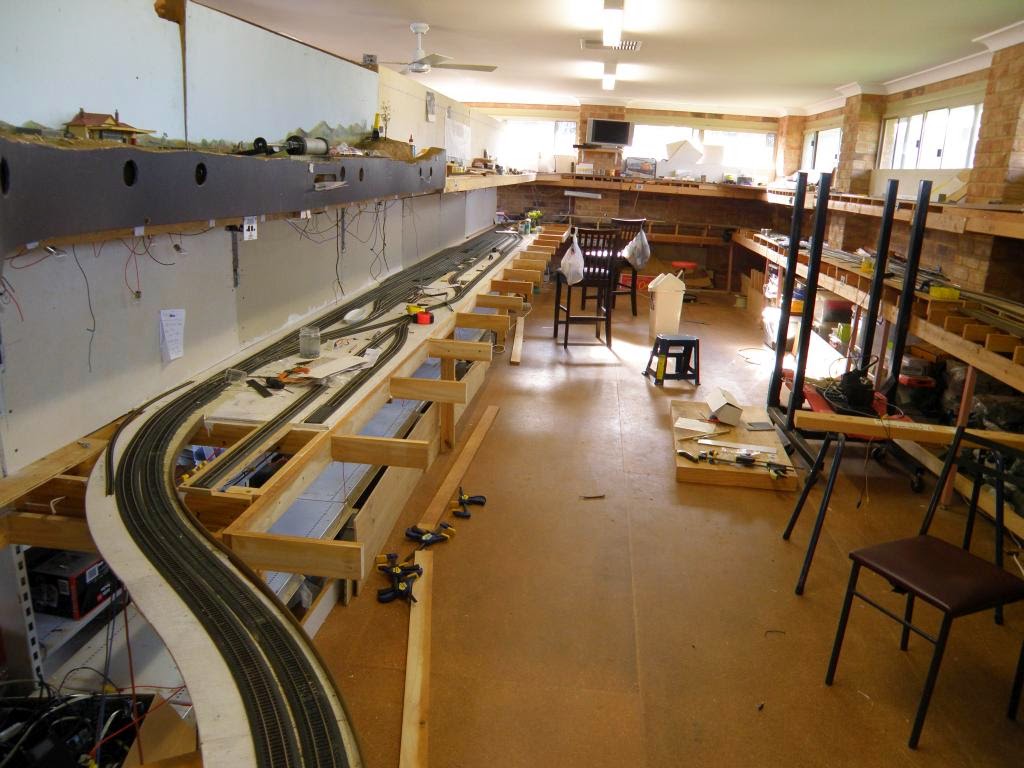 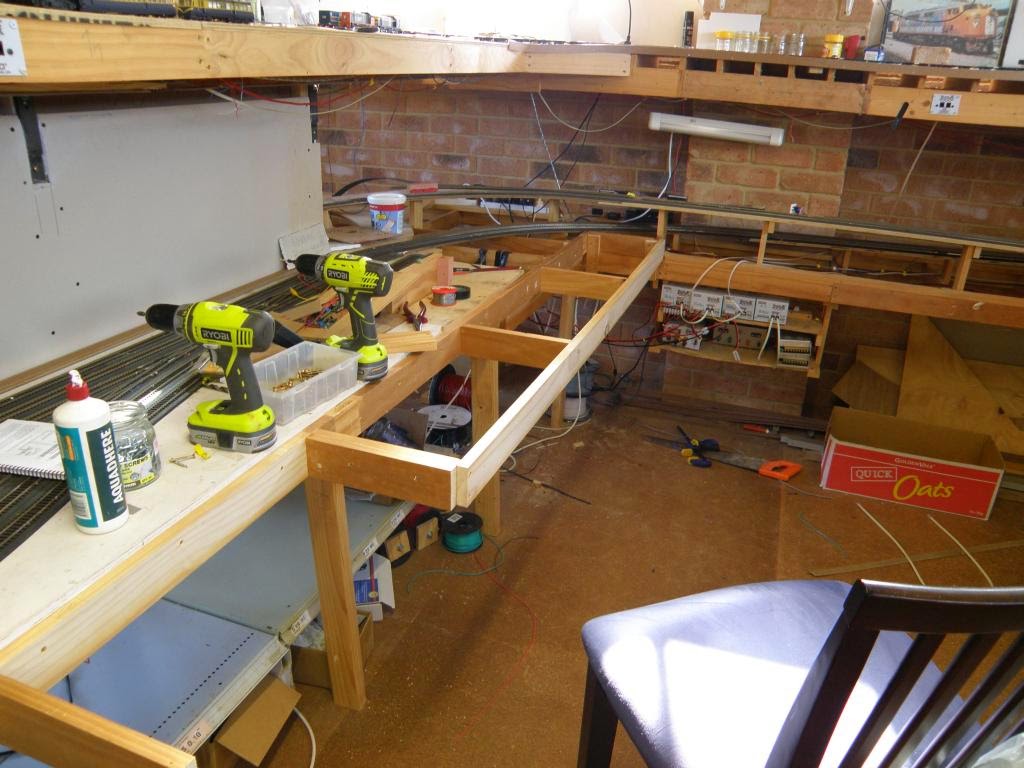 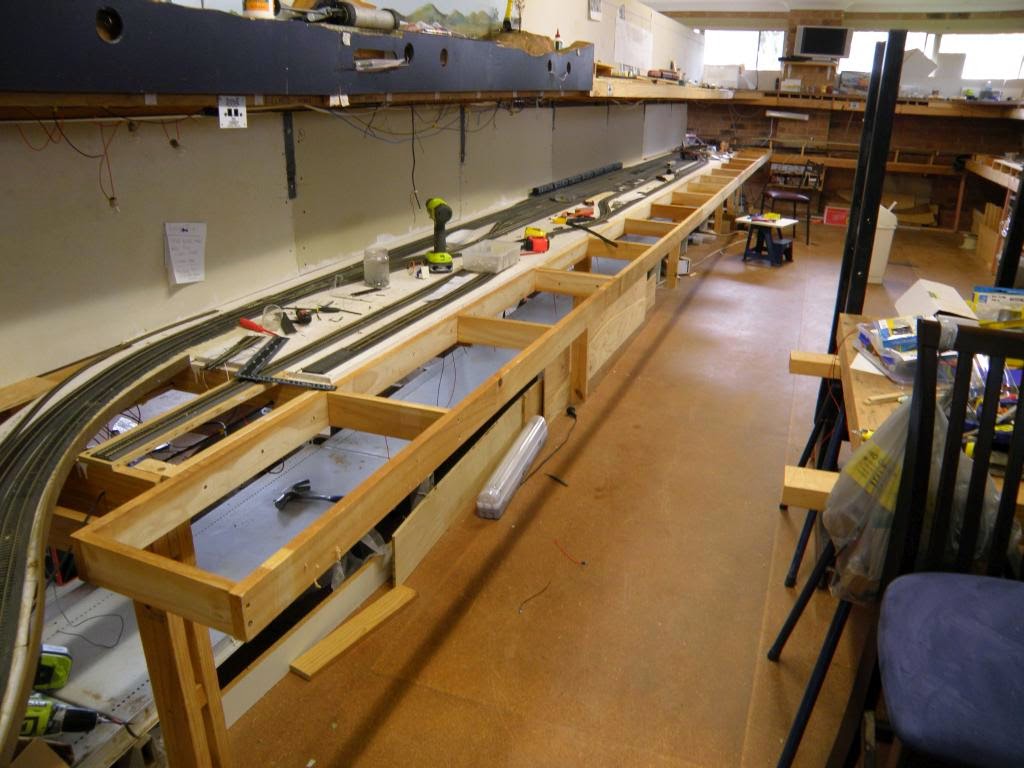 Finished I glued the extension together. With ply glued on top, I doubt it will need extra legs. It already is very firm. 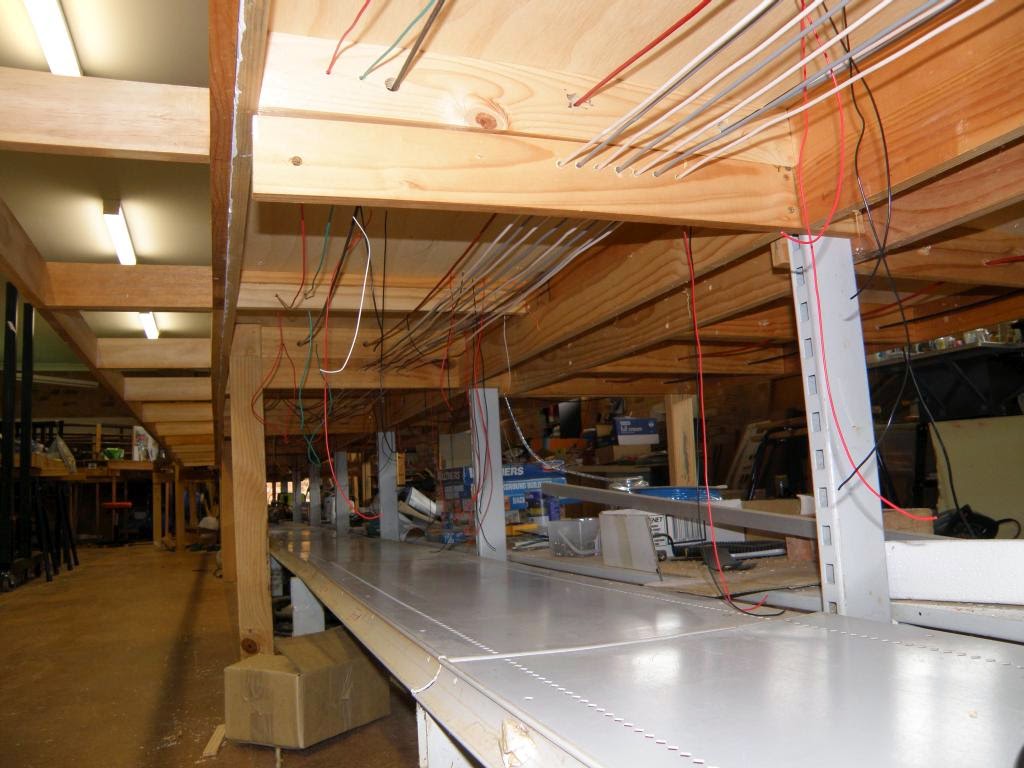 Under the coal siding The heavy black 35 amp cable and the similar Red cable are the DCC bus lines connected to the DCC Command Station.
The smaller gauge wires are the short protected local feeds, one for each track. Now all I have to do is join the black and red droppers to the correct feeds :) That job starts today. Before I started this post I installed the Hex juicers for the points. You can just see the multi-coloured fine wires dropping from each set of points in the distance. Unfortunately I will have to solder wires to extend the cables back to the juicer. I avoid soldering especially in confined spaces like this. I will have to be on my back on the lower rack. 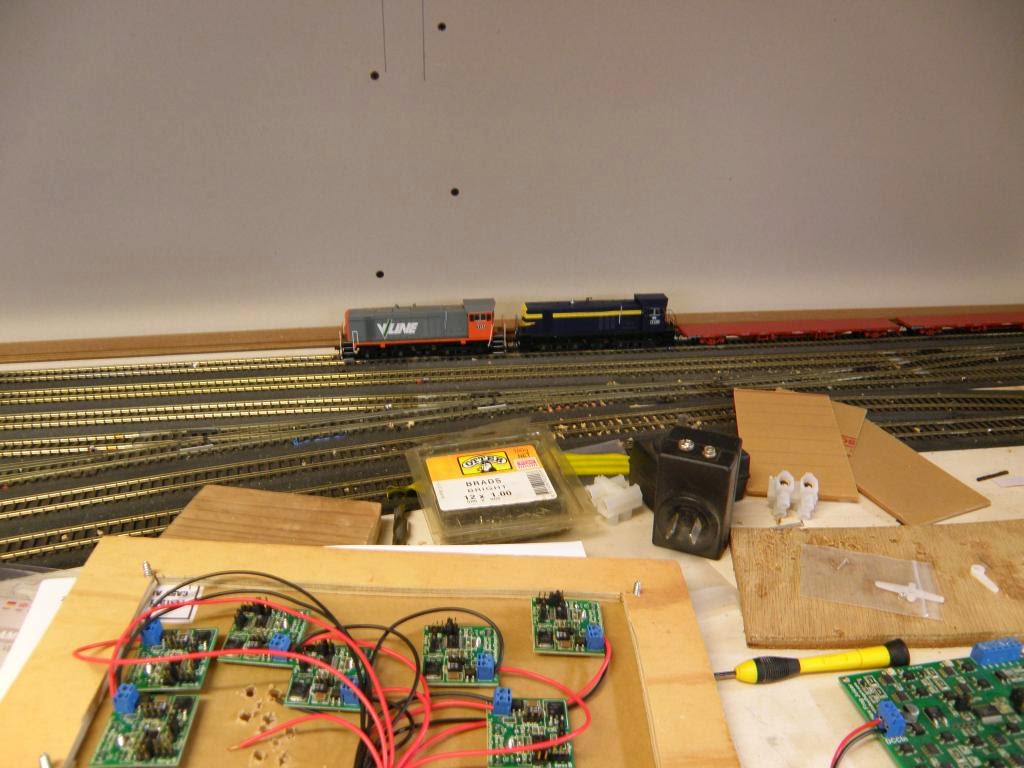 So with the arrival of the first train at the Coal Siding, all we have to do is wire it up :(
All it needs now is the droppers and the Hex Juicers to pass through on the main. Definitely my next job.

Well hopefully more to show in the next few days... Although Epping Exhibition is on again next weekend ;)
Cheers
Rod Young