Picture Story
At 9.00 this morning Ron and Steve arrived from Kilmore East with the new helix, which was professionally built in Melbourne to our specifications. How about that :)

Al, Graeme, Tony and the boys up here can finally see a layout we can run on, and we all thank you guys for your helix. The last link (of the layout) is finally in place. 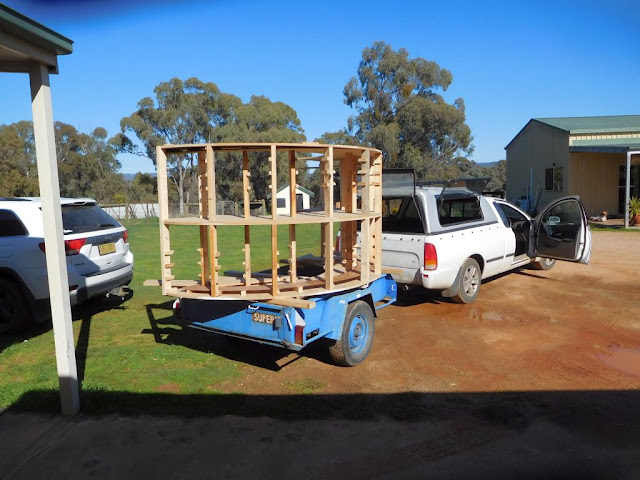 After some mean cold, windy rainy weather for the last few weeks, the boys arrived with the helix. It was cold, but the sun was out, not a cloud in the sky. 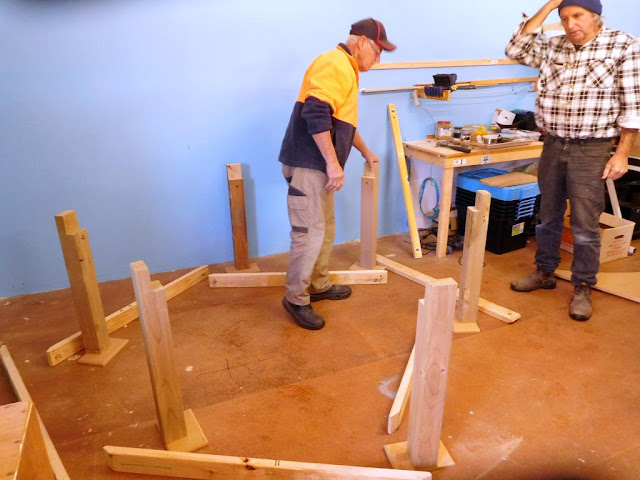 So with 3 willing helpers, Ron lays out the legs and gets straight into it, with Steve looking on. 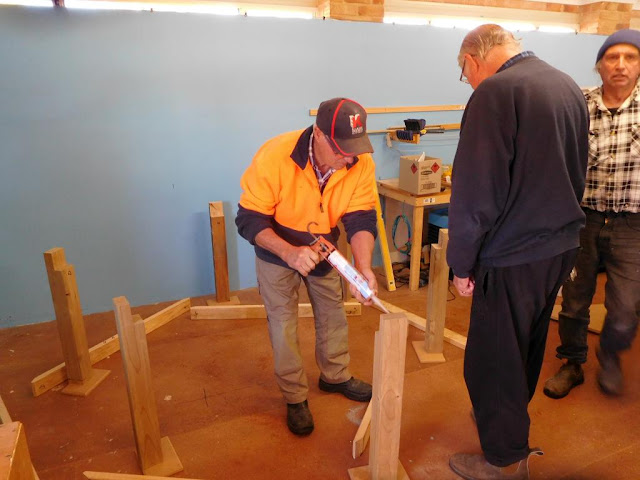 Al's ready to help as always, but it takes time to get it all set up. Our turn comes soon. 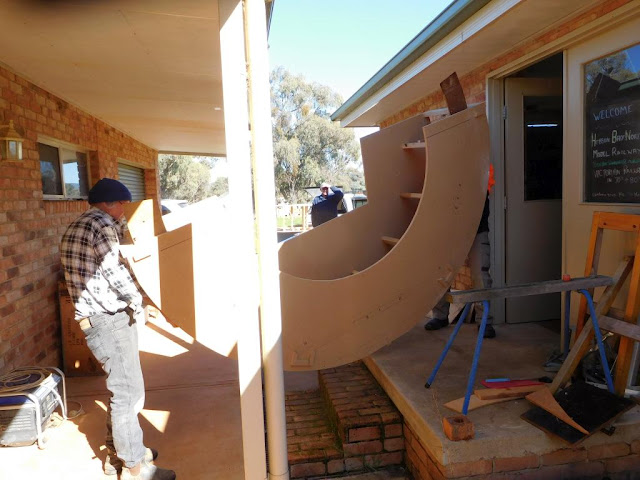 So here we are carrying in the first half. 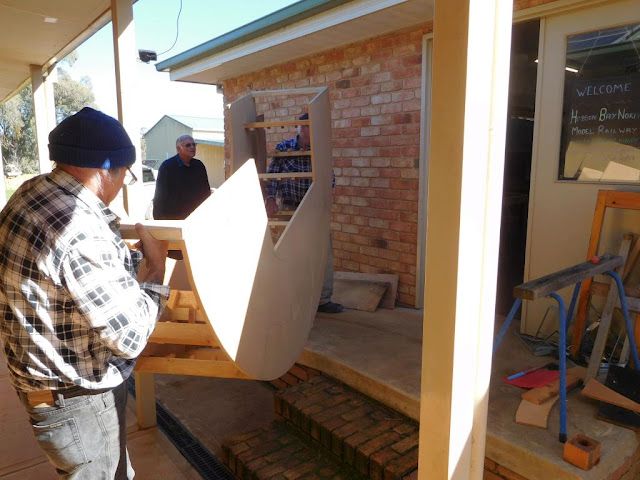 Hold on lets try this again from this direction. 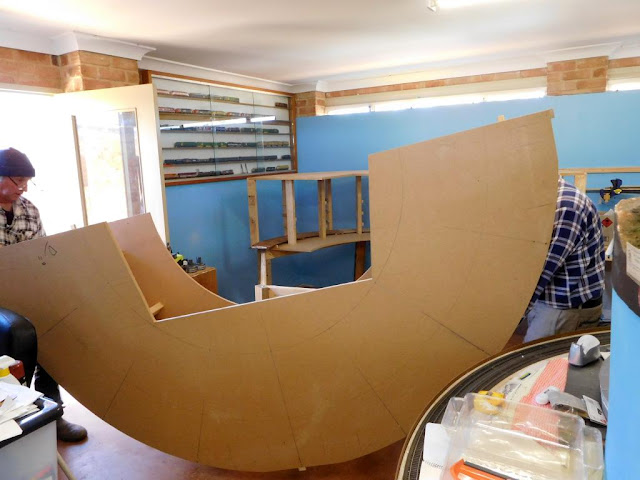 aha! That worked.  So glad the boys had a site inspection a few weeks  back and were able to sort out the obstacles. 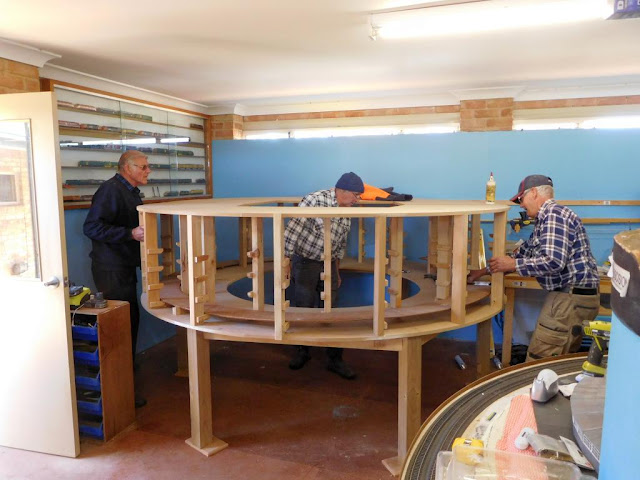 ok both parts are in, and now we need to set it together and tie it down. 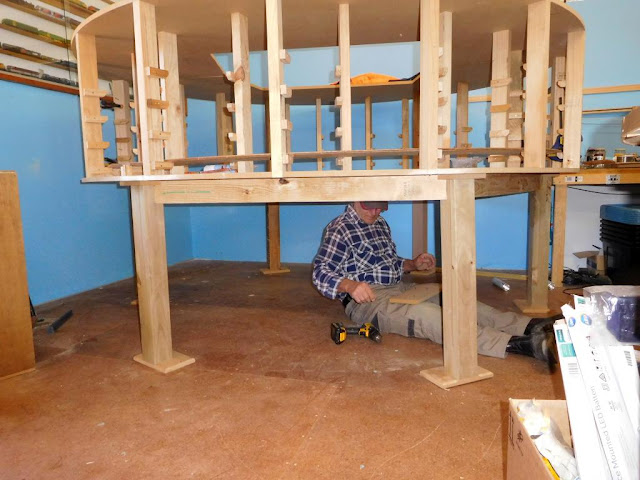 Ok everything supported and its steady as a rock. The boys pre-planning worked a treat. 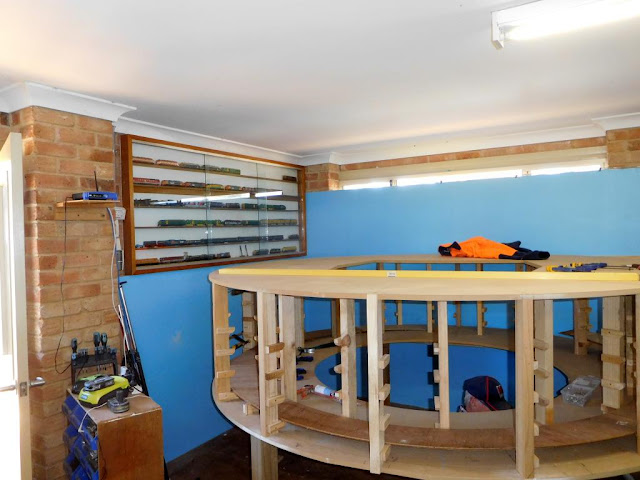 Steve talked me into leaving a gap to better access the showcase. We had the room, so why not? 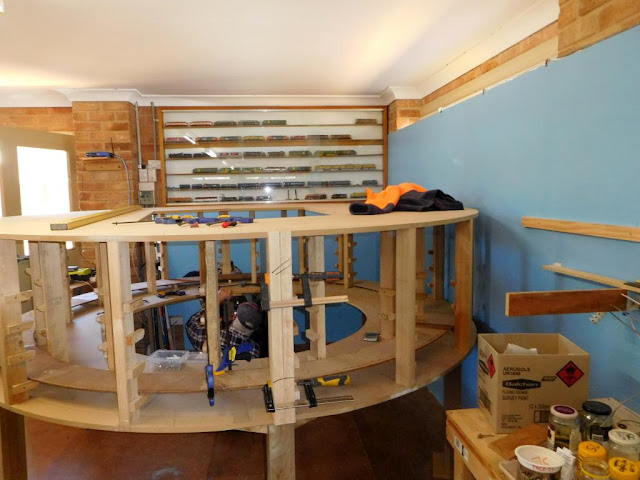 The first level of track bed is in place, after track is laid out, we can lay the second level, and keep going to the 4th level. 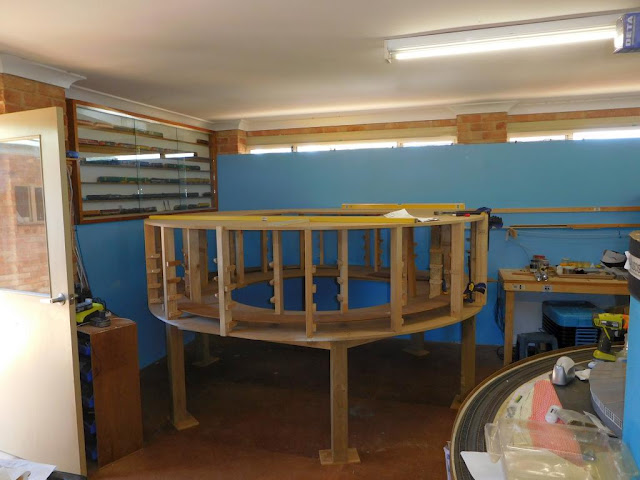 Its locked to wall and floor, and is very steady. 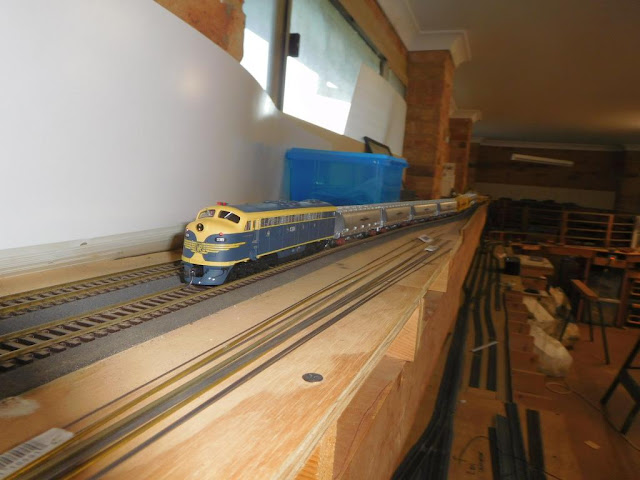 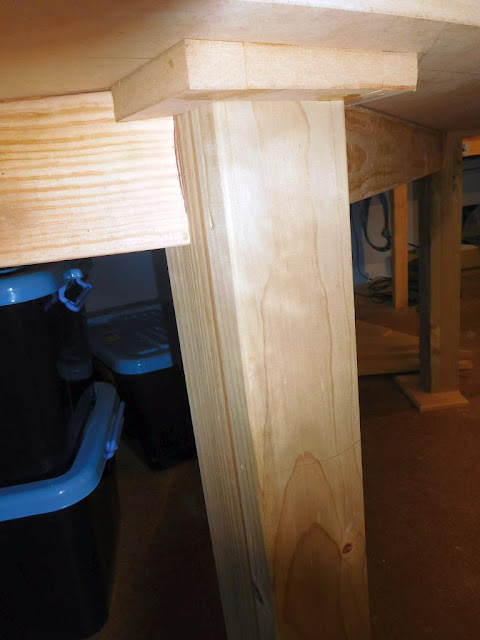 Showing the framework around the legs. 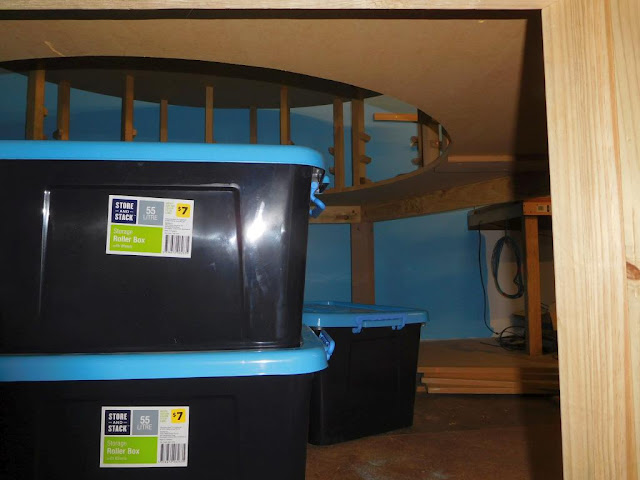 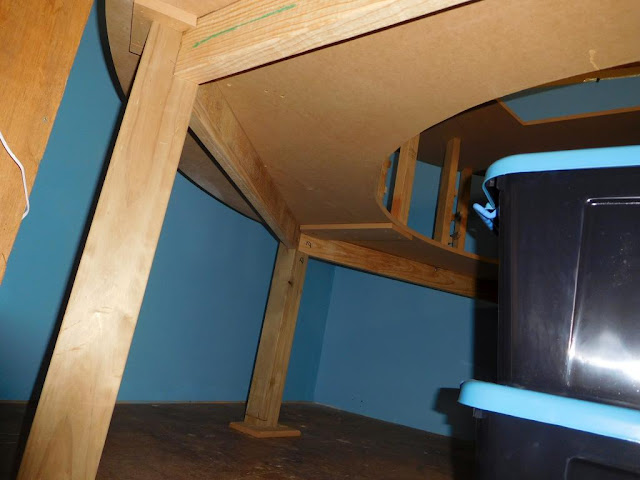 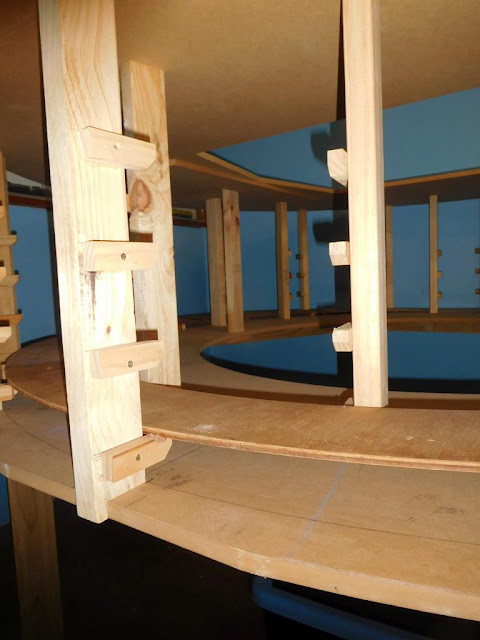 Ok the road bed supports are designed to exactly raise the track at 1.5% with a gap of 102 mm which will allow double stacks, if the US prototype boys want to run something on it. 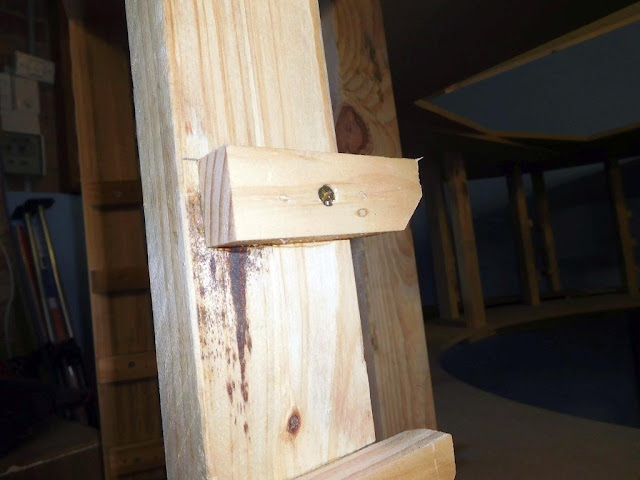 The pegs are glued and tacked to the line, then screwed into place. This stops the screw from twisting the peg. 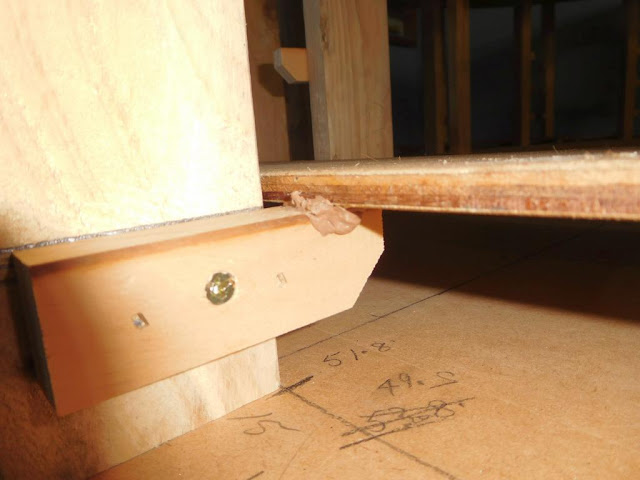 Now the road bed is rising, and to save work, the pegs were not sanded to allow for the accent. So track bed is glued and tacked to the top edge, to avoid twisting the bed. The outer peg is about 3mm higher than the inner one, and so that translates into super elevation. 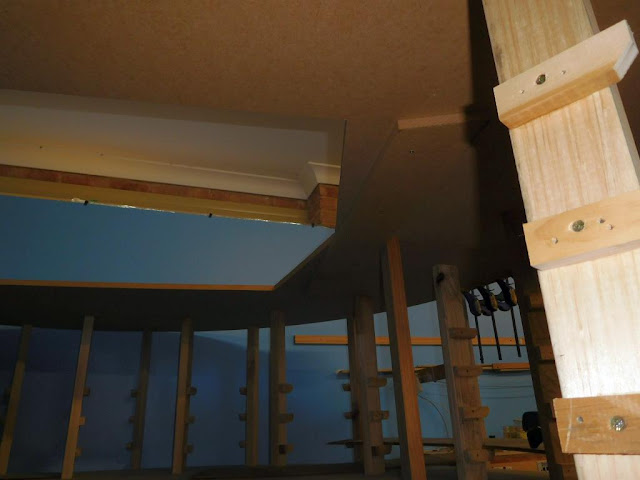 The "roof" is in fact a reversing loop on the branch line, and it houses a terminus station and yard. 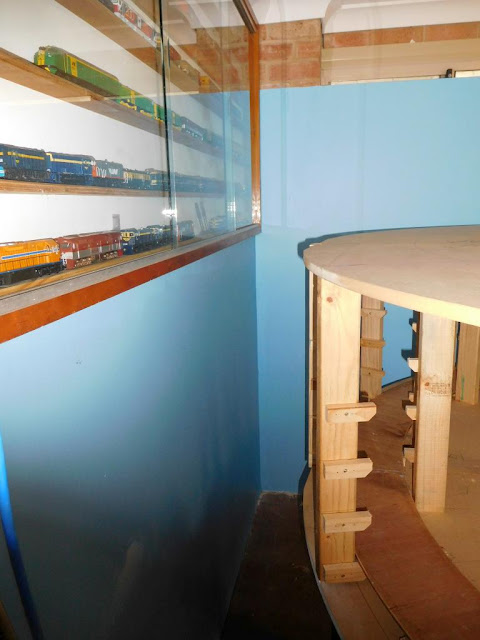 Not sure I will fit through the gap, but Al got out after we sealed him in. Guess it will work Ha Ha. 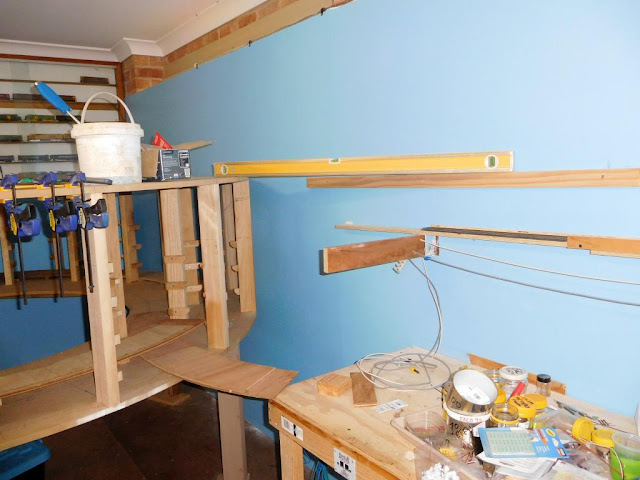 The helix is exactly in line with Albury and the BG on top! Ignore the curved bit laying between the modules. It should face the other way and will be the exit from reversing loop. The helix entry point and the reverse entry is going straight ahead and will enter between the next two uprights to right. 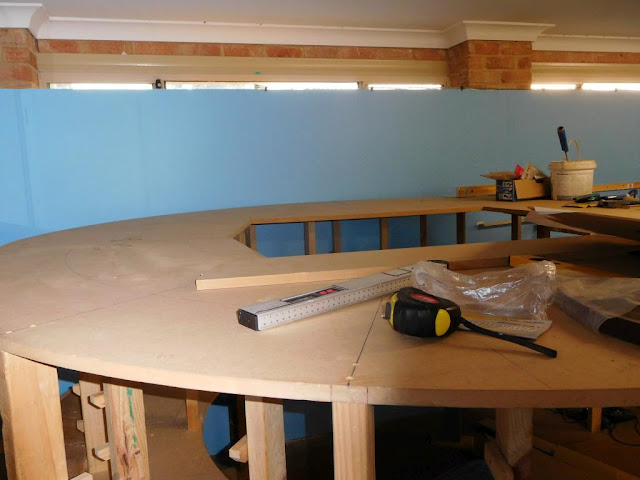 The branch line Terminus Station, up here, will have 34, 36, 38 inch curves and room to place straights where the station points need to go in, for reliability. 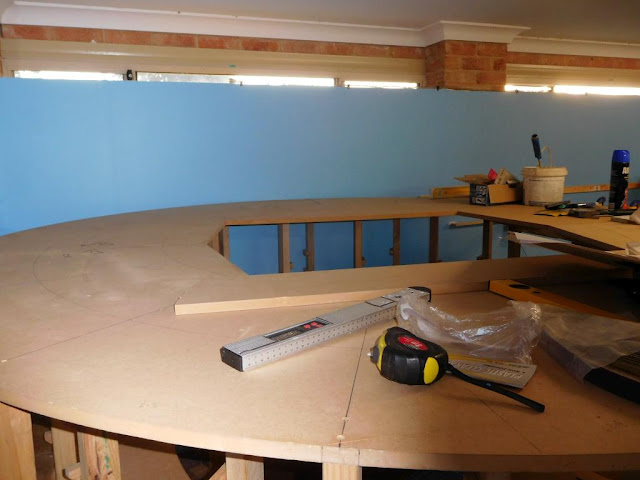 I will built a 250mm circular back scene around the hole to stop you seeing the track approaching the station on the reverse loop. 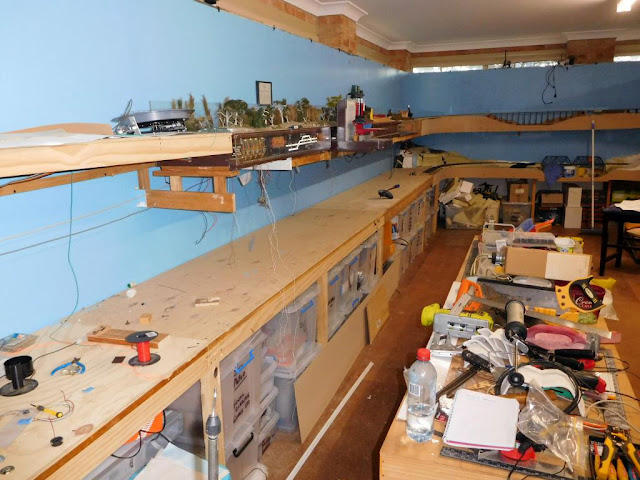 After the lads returned to Kilmore East, Al and I started cleaning up, after Al finished preparing Bullarto for more track.  All ready for track on Albury side, as soon as we work out what space is required for Albury Railway Station buildings..