So what is next?
Al Jeeves and I cleaned up the end of the branchline a few days ago, and as promised I can now show what we are doing.
Am afraid it leads to another temporary connection, but it is all in a good cause. To allow me to get trains running, and test what has been laid. Then perhaps I can attempt a bit of scenery? 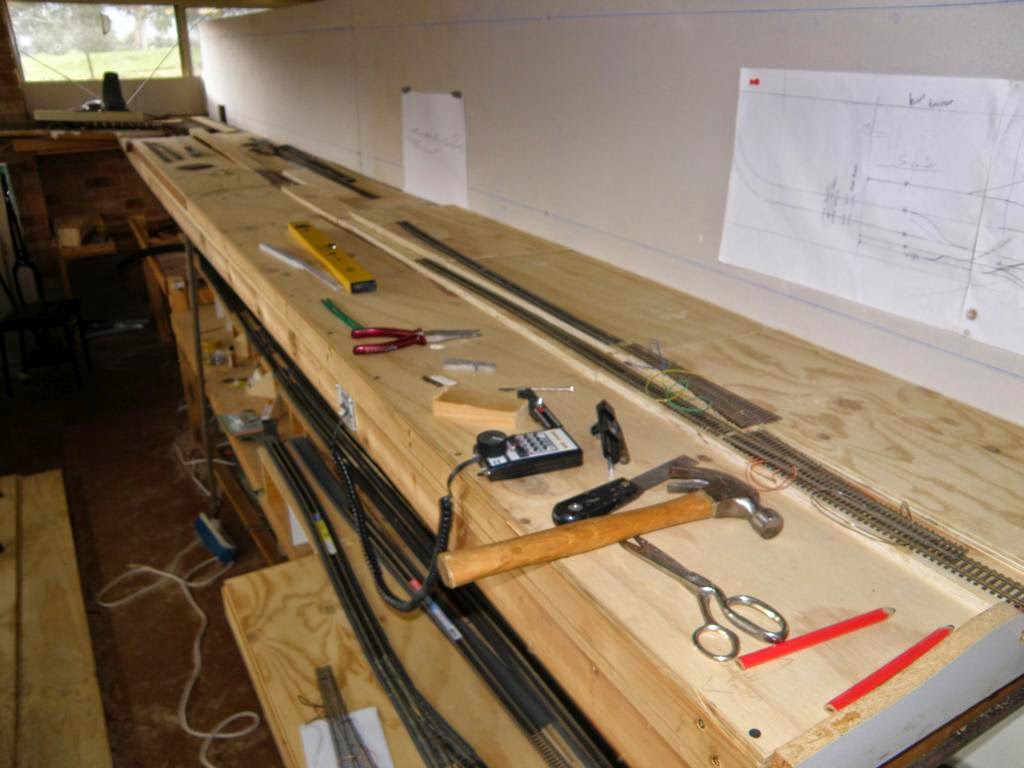 Ok  After all the prep work was done and the deck cleared and cleaned, and clutter already was starting to appear! I am designing the area allocated to a rather large Wheat Silo which will run along the backdrop. 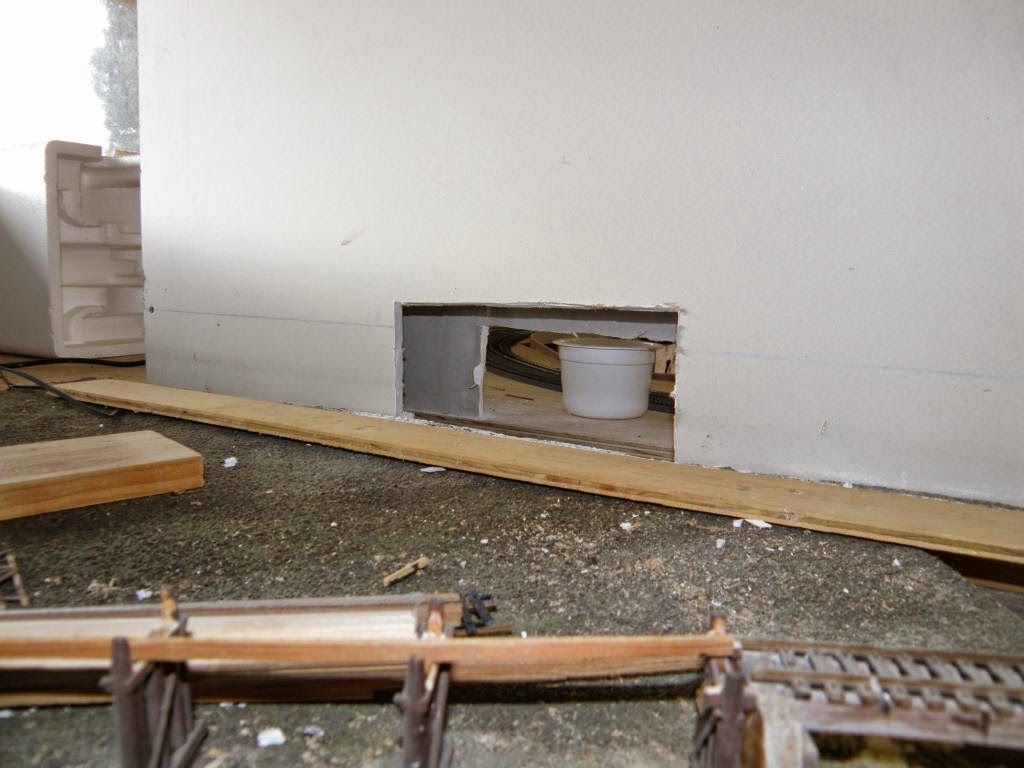 Eventually the branch will continue to the left over the trestle to the terminal station at the end of the line. But for now a temporary line will be built over the flood plain and into a tunnel and back towards Bowser where it will become the main line until construction starts on the other half of the Railway 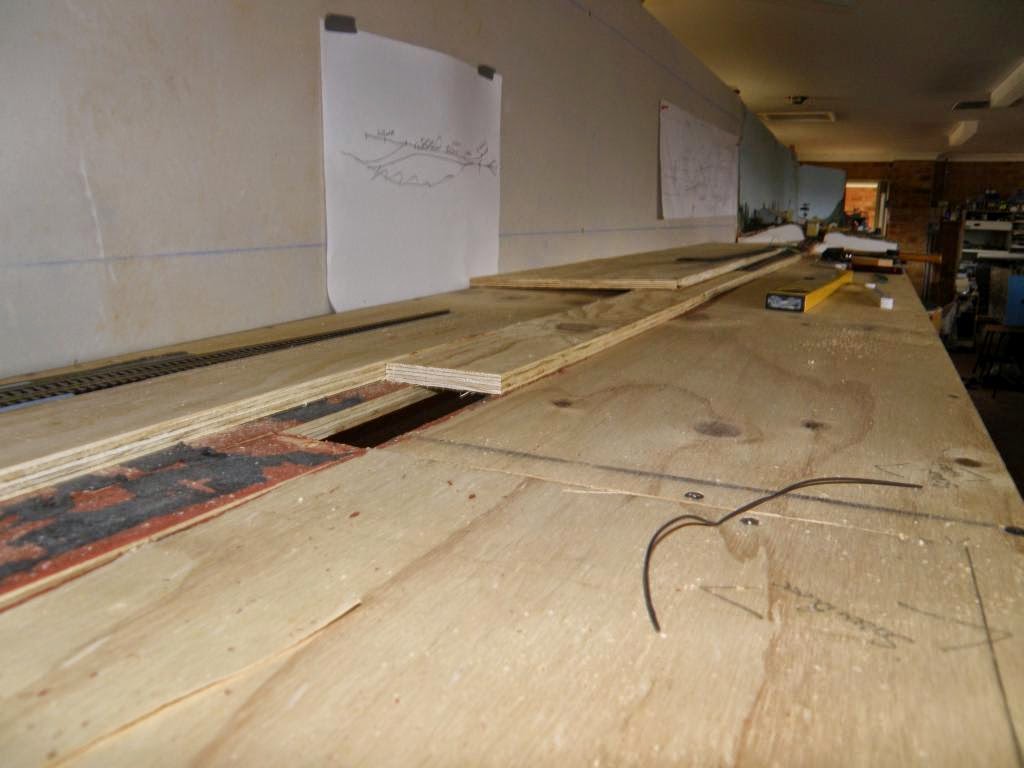 I decided to modify the track by raising it the thickness of the five ply. This will reduce the grade to the trestle and out of the station on the old layout in the distance. It does create a few extra problems though. 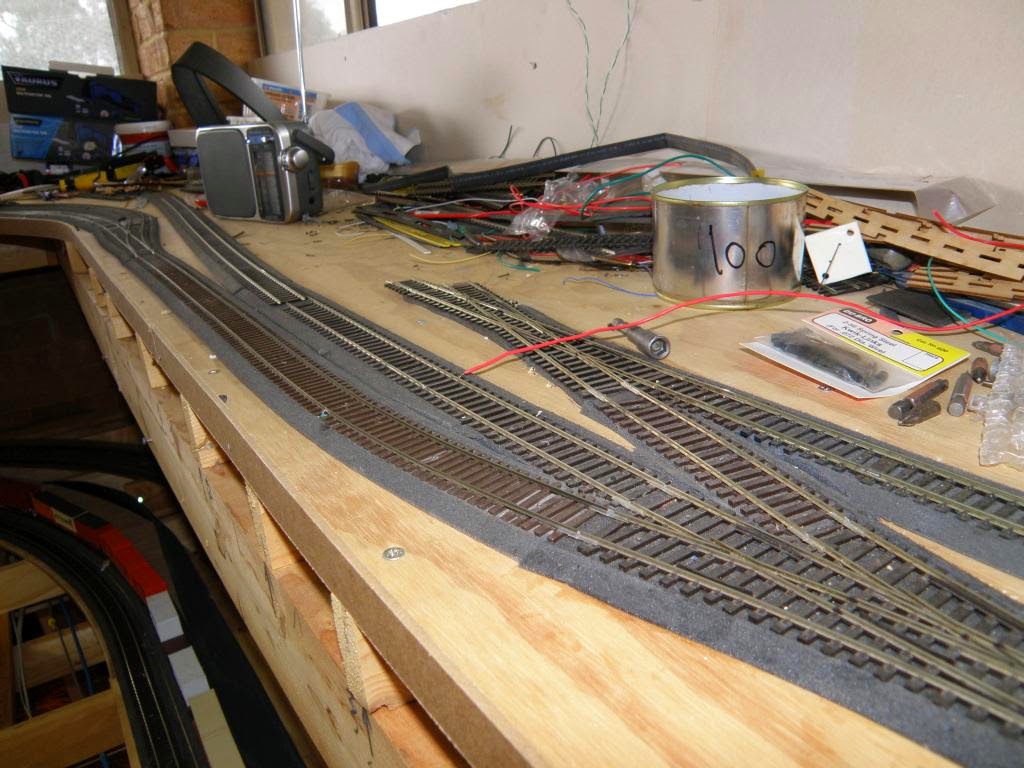 This is Bowser on the other side of the layout, and definitely marked for a clean up!
The track to the left enters the branch and the one to the right crosses the SG and enters Glen Rowan Quarry. Yes a bit of compression is used here :) The middle line will continue on as the main line into the other side of the room behind the wall shown in the next picture. 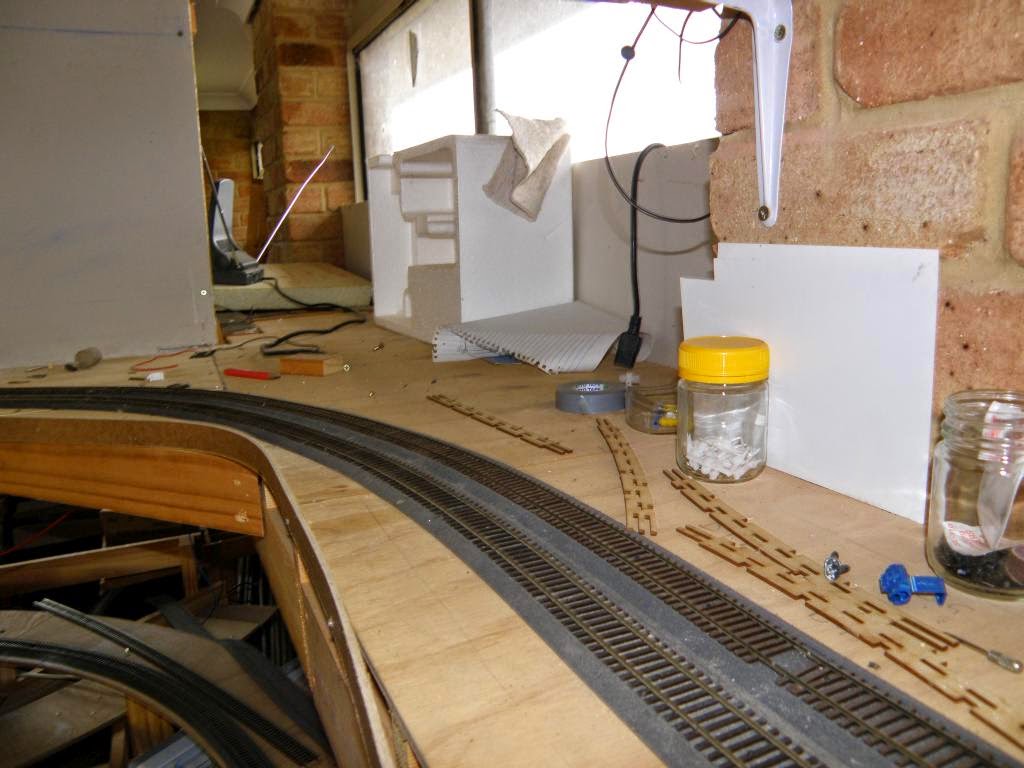 So with both BG and SG running along the wall into the other side eventually, I decided to improve running in the short term, by using the BG main line and swinging it to the left and through the backdrop. 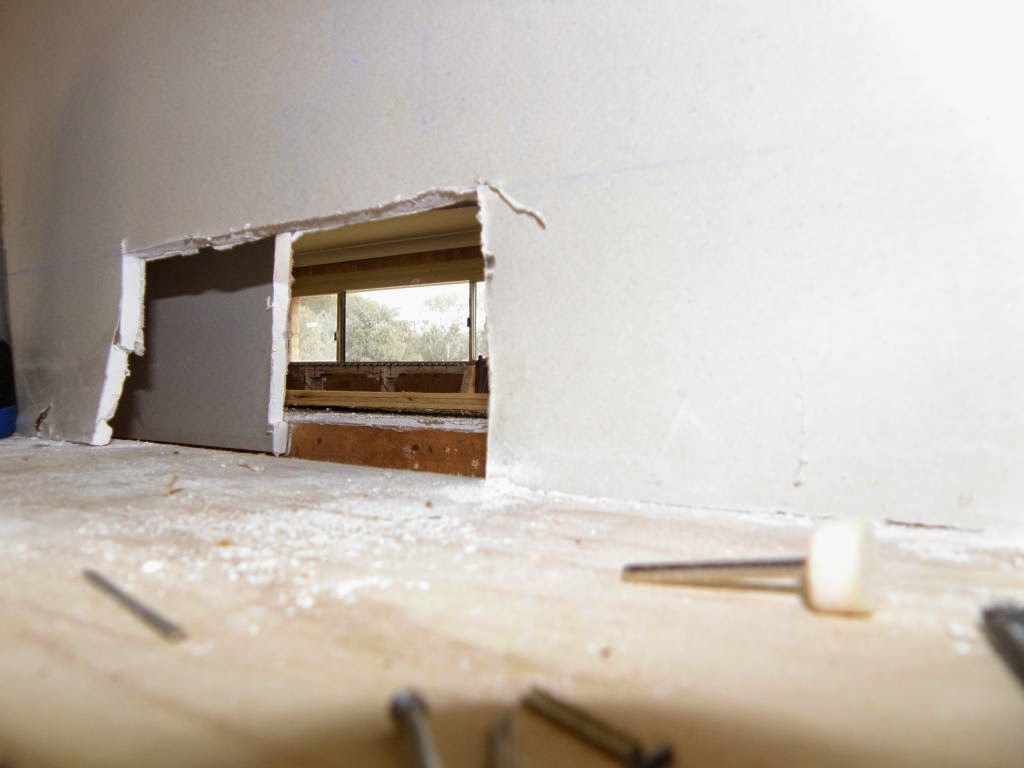 And rejoining the branchline across the flats and via the dead ended siding of the new Silo? or maybe not? I will see if I can find another way. (of entering the branch)
Another stuff up? yes the backdrop was cut back to front I think :(

2014_07_01
Well its not exactly raining, however I have two pair of socks on and my V/Line bomber jacket over a winter long sleeve shirt. Sometimes 11.8 C is a lot closer to zero, than one might think :(

A couple of days of frustration. But I at least I have one point motor in and working. I want to operate the branchline with Tortoise point motors. I have about 20 and that should cover all the points.
But these motors do not work off DCC without diode support and anyway, I feel by DCC bus is going to be taxed as it is. But before we get there another problem arose!

I added two more  Loconet UP5 plug in modules and found that the system began to break down. Already my Wireless Receiver was not maintaining connection with my DT402 throttles. But now my plug in throttles were not connecting properly.

Spent about 4 hours searching the Digitrax site (What a great resource they have developed there)
And finally decided that I had two wiring mistakes to fix and a new 12 volt DC bus to install.

Ok first the wireless receiver. I had already moved it from the command end of the layout to a spot high on the island modules. It receives in a 360 degree circle, therefore that should improve things.
It didn't........

However the command station has two Loconet connectors. Can you send one bus to the left and a second bus to the right. I cannot see anything in the documentation saying you can or cannot do this. However it appeared to work for the last 5 years, so I guess that is not my problem?

Now everything looked right till I got to the UR95(?) wireless receiver. I had connected this into the side connector on the UP5 as the instructions tell you this can connect a third throttle or a single device that does not allow further devices to be connected beyond that device..  so I connected the wireless transmitter to that connector. It sort of worked, but kept dropping out. So I made up two new loconet cables and ran the Wireless receiver in line with the rest of the Loconet....   And it  now works perfectly. No more drop outs providing the 9v battery stays around 8 v or more :)

So why are my wired loconet (throttles) playing up?
What did I do last?   Add two more UP5's?    Ok when I bought my cable kit I got some testers for the coax cable. So I plugged all the new cables in and as when I built them, they all stood up to the test. Plugged the system back together, and still my throttles LCD screens were rotating through a menu and not setting up ??

So back to Digitrax site and some more research.

Now I have never before worried about external power to the UP5, which loads up the Command station just a little. I have before I added the last two, 10 UP5's on my loconet which is 70 m long, brocken into 2 sections at the command station which sits in the middle of the loconet.

So I found a HD 13.8 V stablilsed transformer taken out of a car radio display case many years ago I found at the dump :) Ran my new bus line down the middle of the island and connected the 6 UP5's on the module to it and tested the system. Everything worked just fine ;)  So their is a limit in distance or numbers for unpowered UP5's  ?? or not?   But at least it is up and running once more.

Next job was even more frustrating!

Job description:   Install power to an already installed Tortoise point motor..  Ha Ha easy because I have a quality 12 v bus running right past it courtesy of the loconet fix :)

So  have special connectors for the circuit board on the Tortoise, havent I? So out with the diagrams.
The 8 pin plug has a connection either end for the Tortoise motor, and the middle 6 pins operate the two inbuilt single pole switches. I want one switch to switch my point frog power. pin 2 to frog and pin 3 and 4 to Pos and Neg bus!    But which one goes where? I stuffed about and finally decided to go eeny, meeney, miney and mo and just connect it.
Now the wires were short and I am trying to wire the plug over the bottom deck and under the top deck, and I am stretching. How to hold short wires and solder to tinned tabs? When the whole lot is swinging free and the solder iron and solder are in both hands? Well I just could not get it done and solder went everywhere but on the connection. After hours of stuffing around getting it up, and finding Eenie was actually Mo, and redoing it my back was stuffed and my mood was not much better.
I am sure I could do better than this when I was younger?    maybe not :(
Eventually using extended wires protected with shrink tube I got it up and working...... no I didn't :(

All this frigging around had broken the throw rod on the points :(
Remove points and solder in a new brass throw rod, drill it and insulate it and mount it back where it belongs. Test it, and it works just fine!
Run a train over it and Loco derails! Bloody insulating joiners!!  On the frog end I had two insulated joiners, however trying to fit 4 joiners at once, somehow I had allowed one joiner to slide under the rail  GRRR!!

Very carefully pull it out and redo the whole job, this time correctly.
Run train over it and all cross inboth directions, no further problems.

So at least I saved 15 minutes not having to run a new power feed, but the whole job took me 6 -1/2 hours.  Just to wire up a tortoise!!  I cannot believe I could do such a lousy job :(
Cheers
Rod Young