Not a lot of stuff that I could post the last week or so. Mainly because I have been sorting through the temporary wiring, removing Tail light short protectors, and wiring no longer needed and setting up the NCE District circuit breakers.  Time consuming but really necessary, because I need to tidy up the wiring and secure it under the deck, out of sight, before I can install my LED lighting strips.

At the same time I have had a persistant short that trips the DB150 Command station every 30 seconds or so. Trial and error searching. First isolate command station, then add one district at a time till I find the cause. Because the Branch line is already connected to two NCE Circuit breakers and all tail light protection has been removed, I left that till last. After all I had already corrected many wiring errors caused by old wiring left in place after new wiring was added in its new roll as a fixed layout branch line.

However after reconnecting, and repairing all the sections, the persistent short was found to be in the Trentham to Bularto branch sections.
So today I started unplugging and testing all the droppers. I have not finished, however just before I came inside tonight, I have the positive feed connected to the to the Trentham side NCE breaker, without the fault. As soon as I connect the negative feed, I get the short. So I have an unknown connection on the negative return between the top level track and Trentham, or a cross feed between Trentham and Bularto.  Should not take long to find it now.

As well over the last 15 years I have been collecting RUB cars so that I can make my Daylight set. I have found about 6 cars and at least 12 are still missing. And so I started searching for the missing cars, because I have a friend who has found someone to build them for me.  But over all these years, I have no idea where they may be. So earlier today I began opening boxes and searching. Whilst doing that I found stuff I had forgotten I had. So as I need to clear a space for the installation of the branch terminus, I started moving stuff around in the boxes and stacking them up under the layout, to clear some room along the front wall.

Yes not much to show, but I did find 15 Locos that need DCC chips and a few to sell as well. 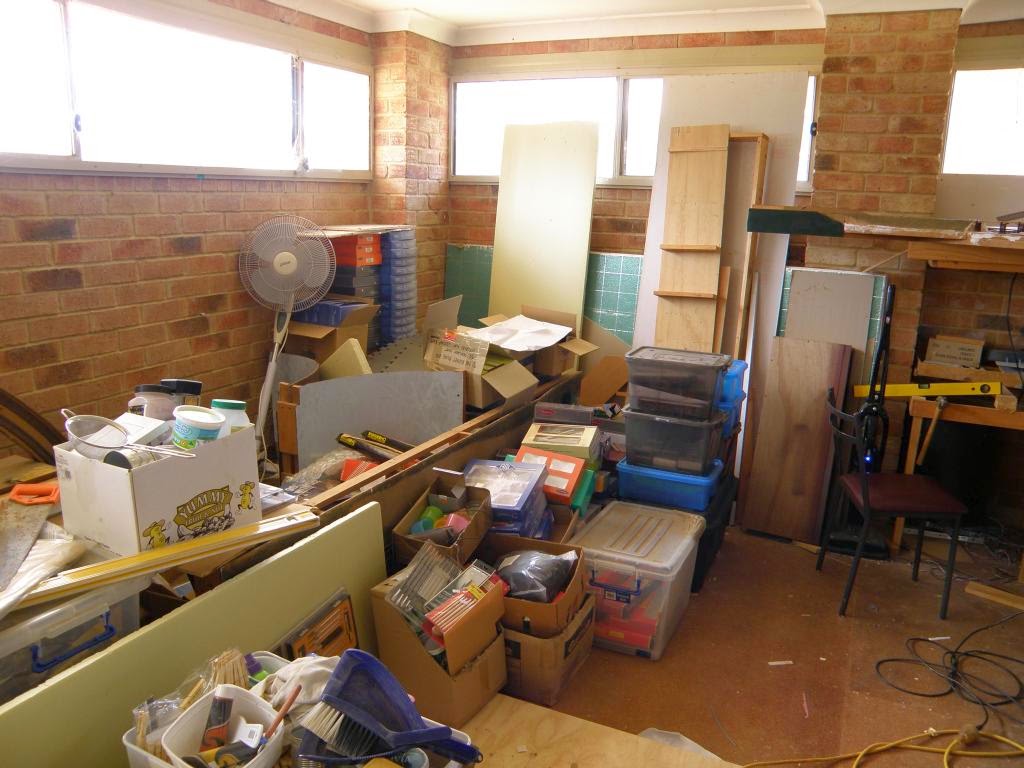 Mostly empty boxes, but I want to keep them so that in the future, my kids will have them when they sell off my stuff.
I did move about 20% of this pile to here... 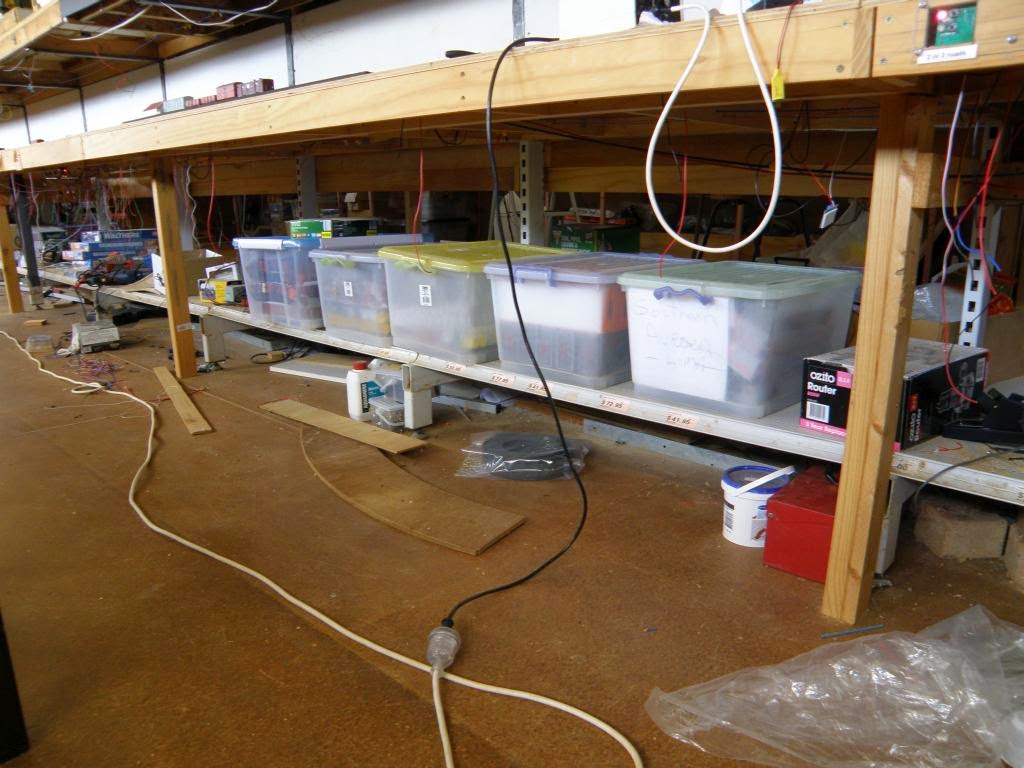 Australian Rolling stock not on layout, and others that need work done before commissioning :) 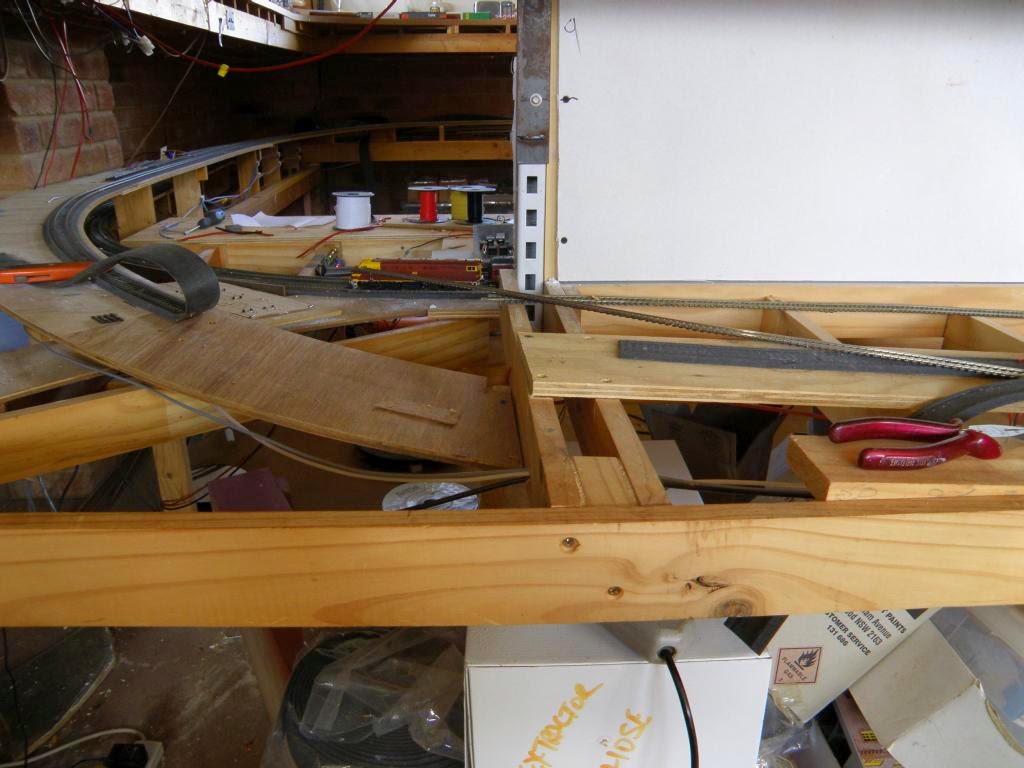 Here is the BG coming up the grade off House Creek. The gradient is too steep for Austrains T Class and the Auscision one as well.  I cut the supports down to soften the gradient and smooth out the climb. 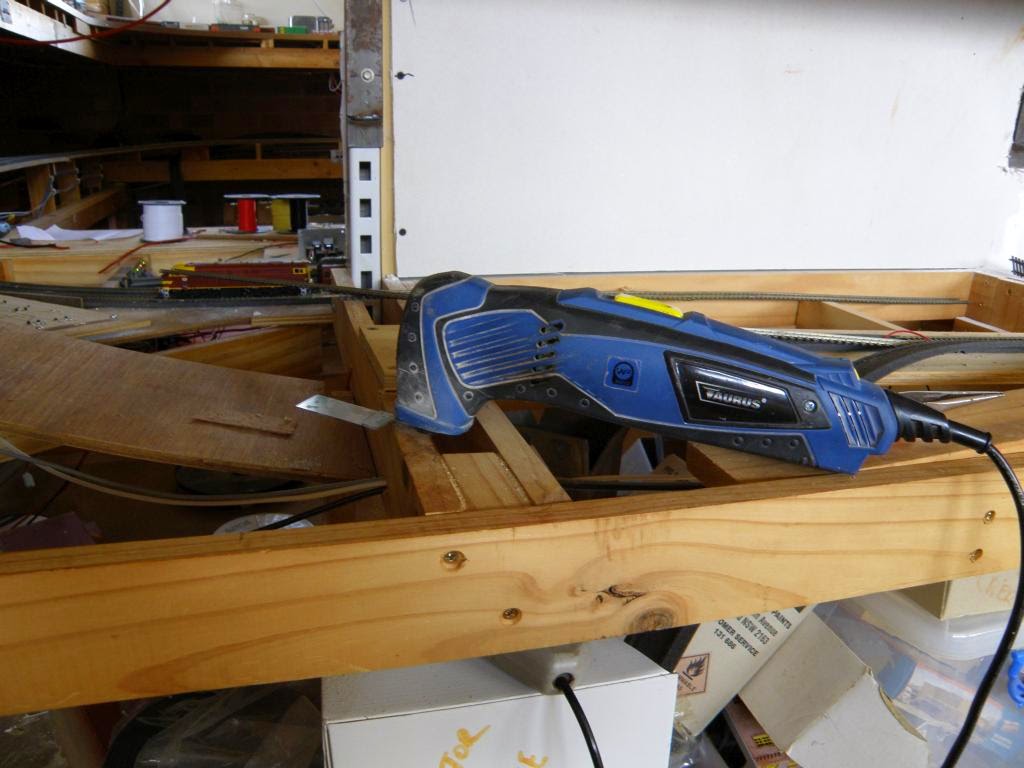 First lifted out the track, removed the screws then using this nifty tool, easily took 2cm out of the bearers to smooth out the grade. 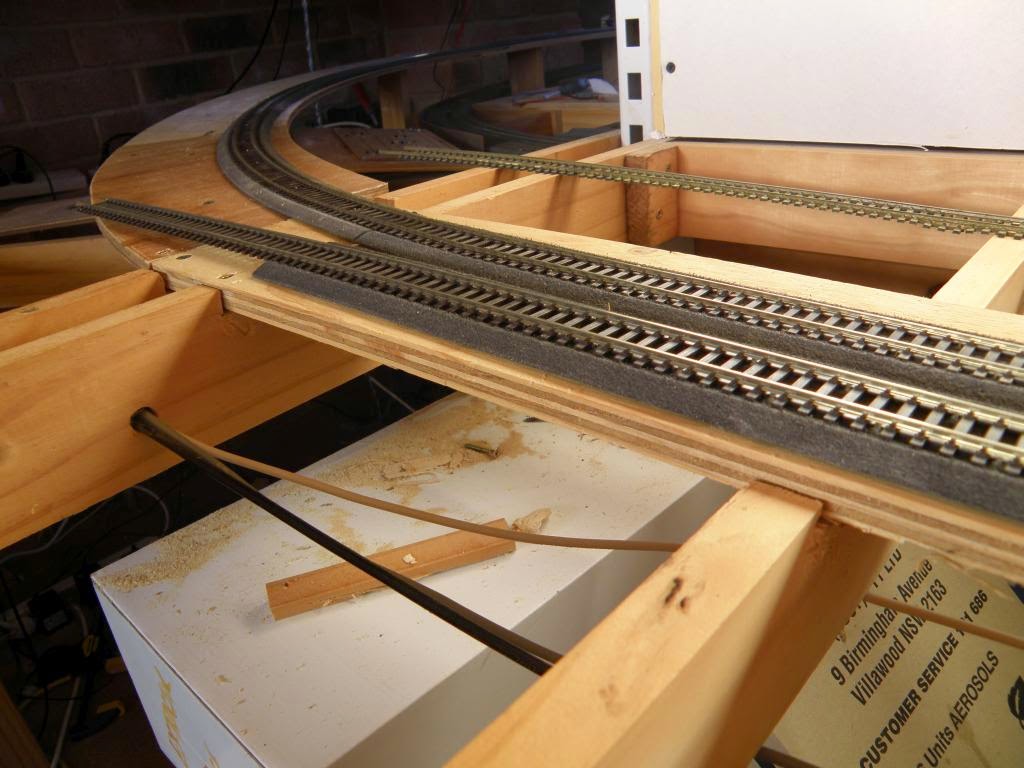 This is as much as I can take out without exasperating the grade to the top of the hill. However  the T Class still stalls. A two dollar coin laid on top of the T was all it needed to climb the hill. I will have to lower the summit over top of the  Albury line, to get it right. But I wanted 10.5 cm clearance and that will mean I will only have 8.2 cm, not enough for Double stacks, which I thought someone might want to run. but not now I guess :( 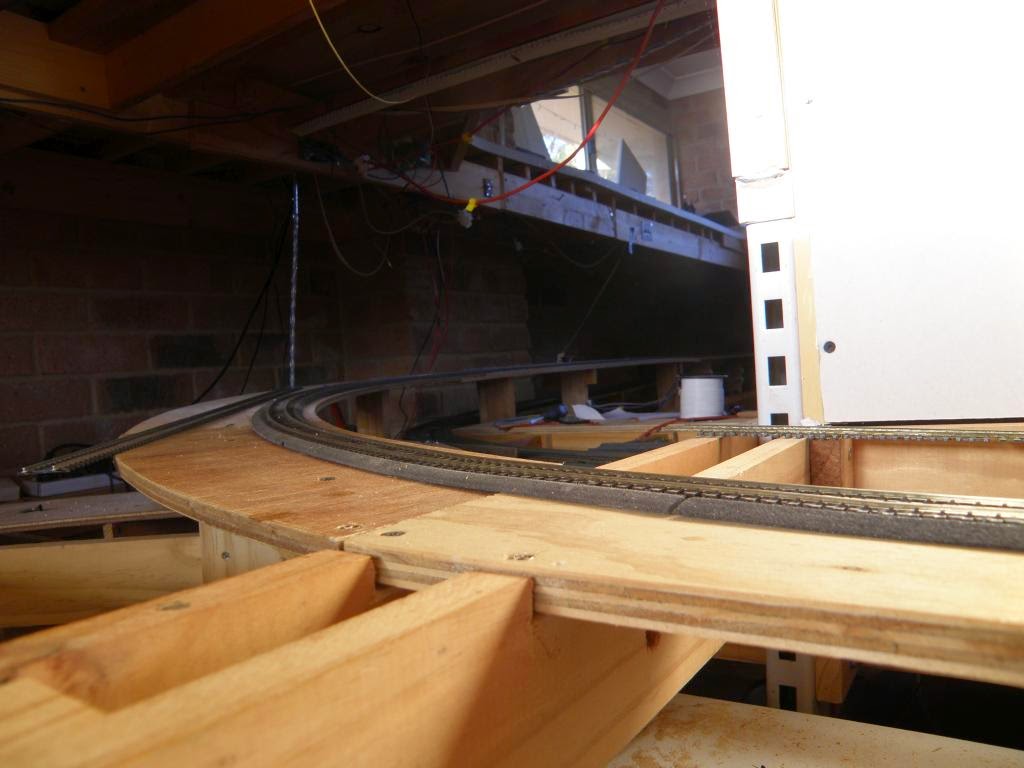 Under the wayward SG track yet to be laid you can see the track bed heading to Albury. Directly above it just this side of the white wire hanging down the high point of the top level needs to be dropped 2cm or so, you can almost see the hill in the pic?

So nothing stopping me from installing the 46" radius SG track to the Loop points about 3 m around the corner and that completes all the SG track that I can lay at this stage.

Then I need to wire in all the yards and finish installing the circuit breakers and points.

Now I must find a home for all the boxes in the corner and I can start installing bench work for the Branch Terminus that friend Tony donated to the cause.

But that will have to wait for another day :)
Cheers
Rod
Posted by comtrain at 8:23:00 pm No comments: