Also figured out where I changed the rules and messed things up, 4 years ago. Correcting the mistakes is taking heaps of time. But temporary wiring is slowly becoming permanent good wiring. That IS satisfying.

I have followed the US Elections a little too much. But I will say, I am happy a Businessman has a chance to prove he can do a hell of a lot better than a "politician". Politicians and Bankers have stolen the US from the people. Lets see if a non-politician lives long enough to change the US and by default the World, for the better. However the dirty Bankers are going to do some damage after not getting their way. I think real silver and real gold is going to be the way of the near future. A cup of coffee might cost $500 if the bubble does burst, and ordinary Australians may not escape this time.

Ok had my drink, its time to put another few pairs of droppers in, before I come in for a meal.

Ok did a bit more! 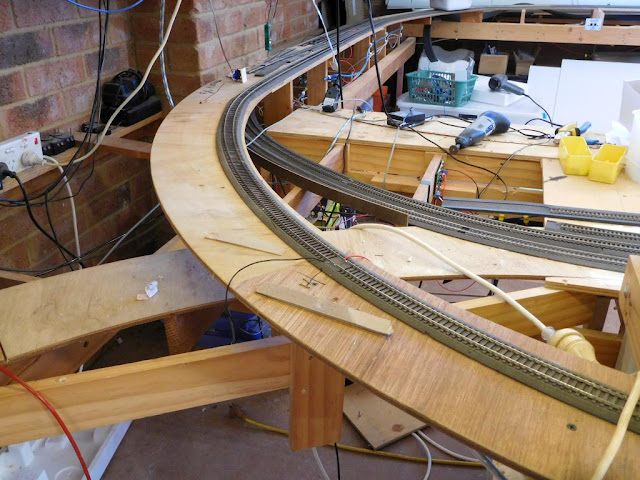 ok this whole curve plus the straight at the further end was not fitted droppers. As well the gauge was tight because nails were bending sleepers. So removed both tracks and wired them on the bench and returned them to position. Good fit remained ok.

Recently I was finding trains were stalling here, and so I need to drop the whole track at least 10mm along this wall. So that is going to be next job. Set up string line and lift and screw back in new lower position. This whole track is dead flat. Rail rises from house creek and trains stall about where straight track starts. dropping it should give train a chance to get to flat section, before climbing grade once again. Trains do not stall on second section, hope the extra 10 mm does not upset that :( 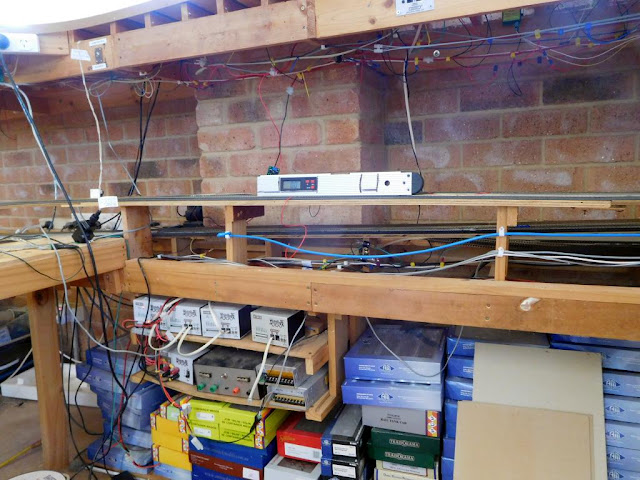 Just 10mm might be all it needs, any more and second grade might be too much. The adjustable level is showing flat and angle zero.
Cheers
Rod
Posted by comtrain at 5:49:00 pm 5 comments: