2014_10_26
So just because the posts have slowed does not mean that the enthusiasm is drifting.  40 years of collecting, with only a few years of layout ownership before circumstances and shifting houses brought that to an end has presented me with huge problems sorting out the chaff, repairing stuff that I did not know was needing it, and putting things back together again.
Catching up on 30 sound projects. I have a need to buy the chips when I buy the engines, but find it difficult to actually find the time to fit the more difficult ones.

So the last few months has been given over to relaying track on the Branch and making it reliable which has turned into a marathon. Even where the track was not replaced, I have had to remove the old DC wiring and start again. Then double insulating sections creating dead spots ,putting new droppers in etc etc.
Still not working, as I have found 3 persistent dead spots and three points that bemuse me by becoming reverse circuited, every time I change something..  I just do not understand how the original circuits were made to work, but discovered a few places where droppers went to point motor switches and switched the frogs from track rather than the feeds. These places generally got new wiring to fix the problems.

So Then because I can run trains now Woooooeeeee!!  I found that I wanted to double head and triple head :D
So hours spent speed matching locomotives!!
It is never ending :( 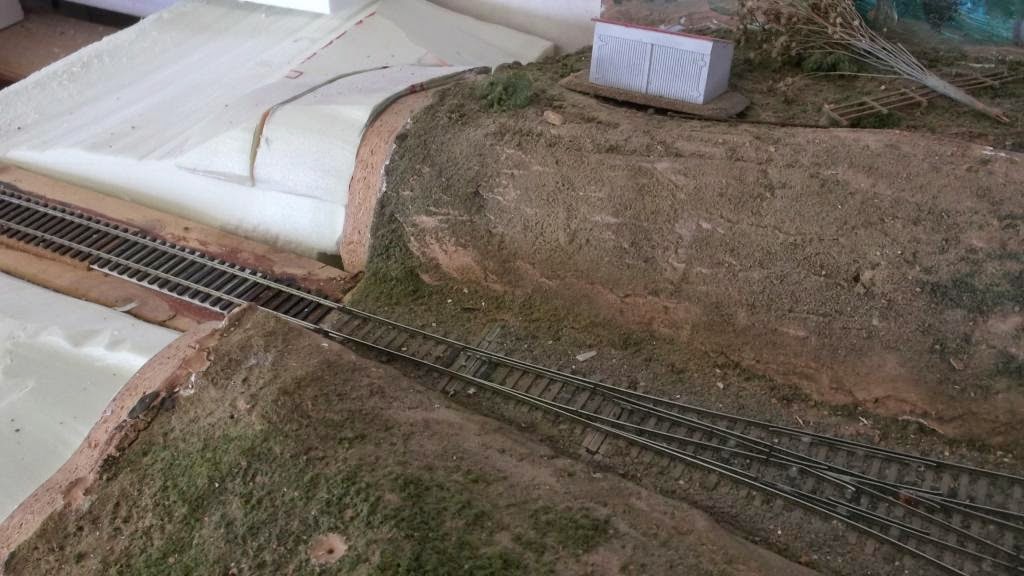 So here we are joining code 70 ME track to the old code 88 n scale rail of 30 years ago. Rolling stock including 4 wheelers bogie feight and carriages go through without a problem But Locomotives stop dead. Just noticed scratches on the gearcasing and suspect that one of the problems is caused by the point motor rod sticking up a fraction too high?  Need to trim it and see. 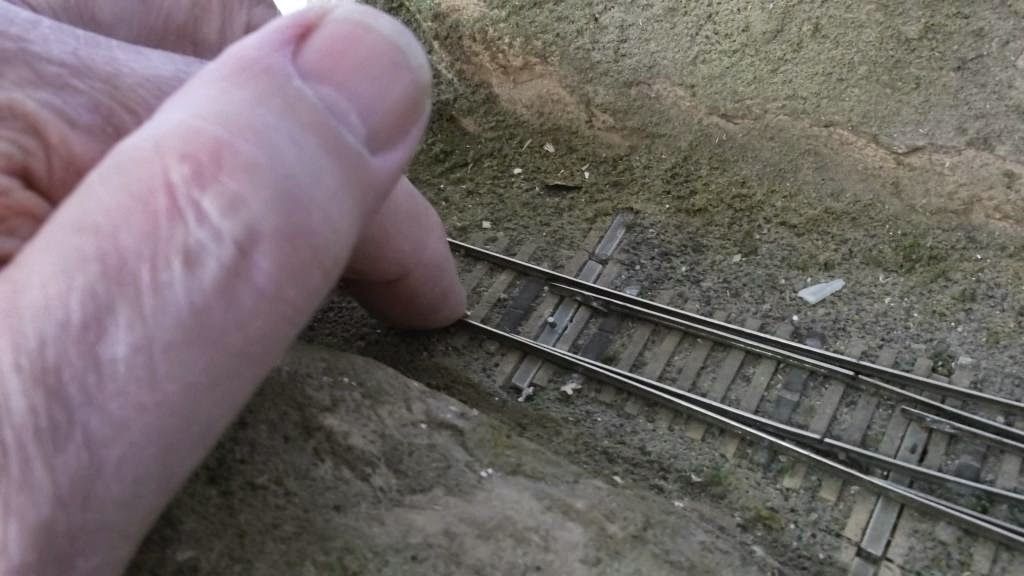 Another problem I discovered taking the picture is that both rails are loose and the dog spikes are no longer holding on to the rail. The track is a long way out of gauge and larger diesels and all steam engines are dropping into the gap.  Again easy fix, but where are those dog spikes? 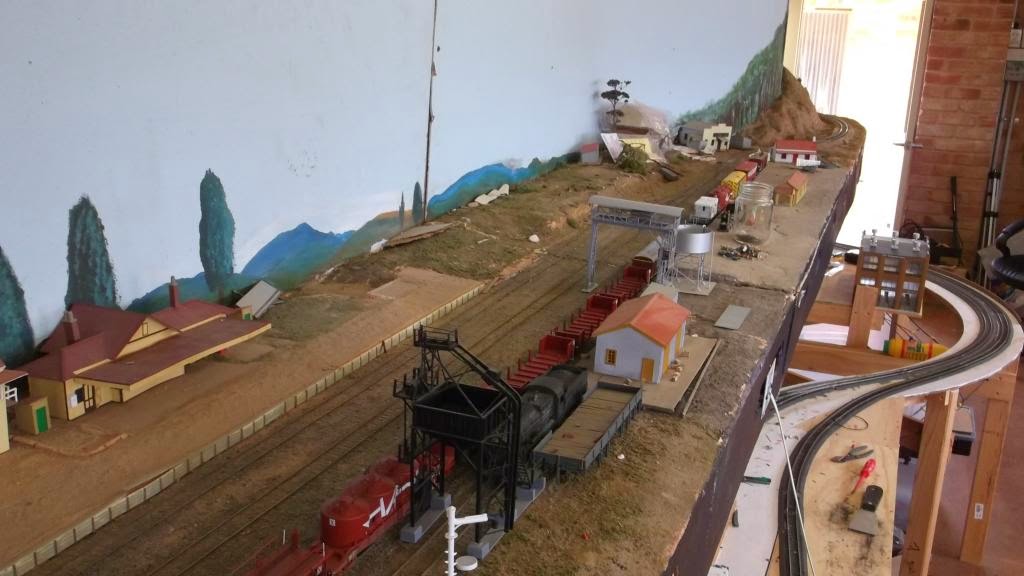 The long roads are all now connected and operate as wanted, but two points at the other end suffer with reverse polarity problems. Just need to solder new droppers and remove the old ones from the point motors. 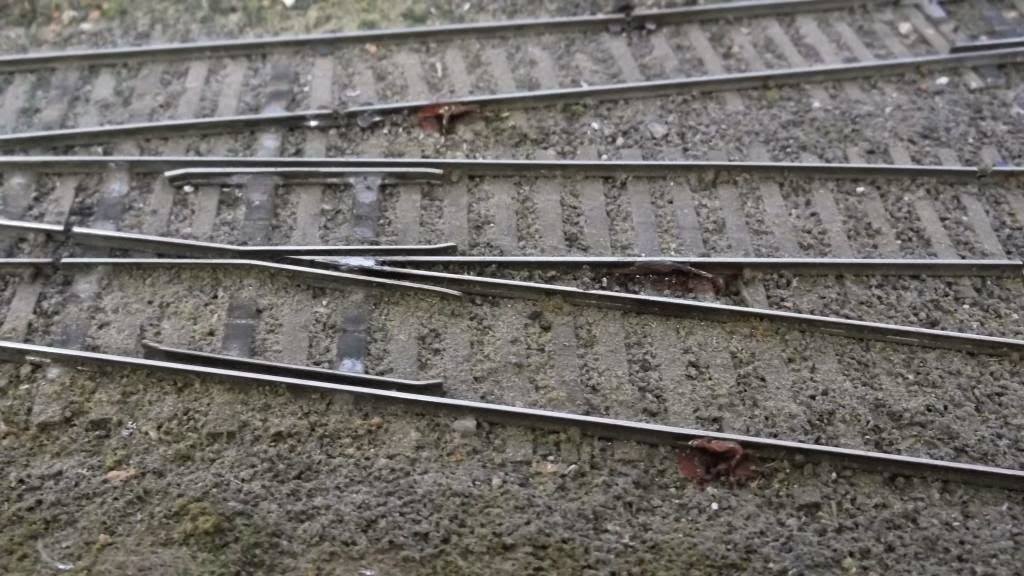 In most cases I have not found the old droppers, suspect it was soldered to the bottom of the rail before spiking and ballasting in place. The rail is bloody awful to solder to, even after using flux to etch it clean. But I did finally realize I had made the old mistake. That is I learned long ago to use single core wire for the droppers not multi core which is usually the best to use everywhere else. Single core just hides away so much better than multi core and seems to stick better as well (for me at least) 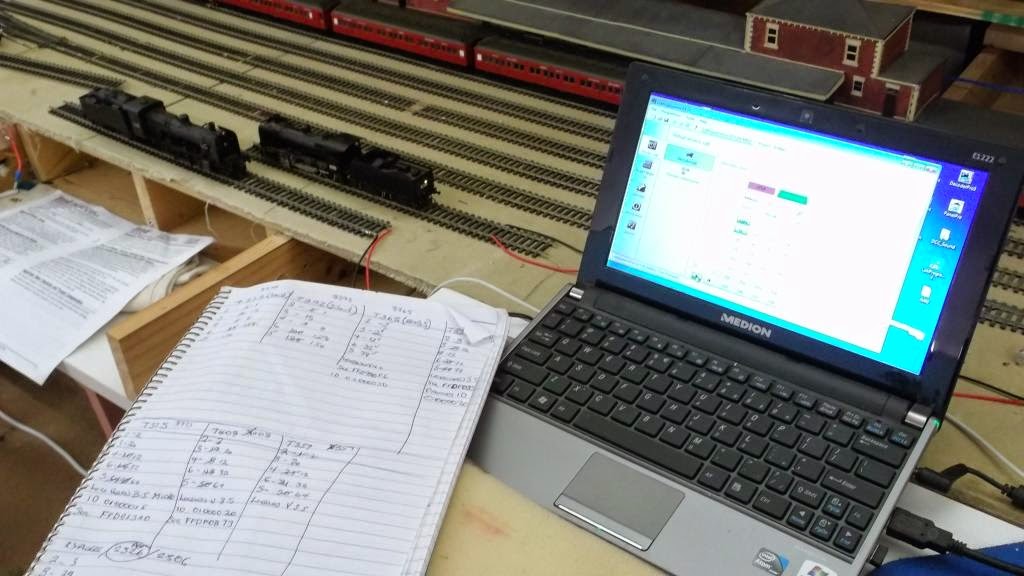 Speed matching locomotives which generally means slowing them down.
I use JMRI DecoderPro for all chips except ESU Loksound which seem to work much better after hooking it up to Lokprogrammer. Here I am running through the K Class trying to sort out a jering motion which I think might be a short between the foot plate and tender. Now as I have all wheel pick up on the tender, that should not happen?  I wonder If I reverse the wheels and transfer the pick ups if that will match polarity between engine and tender?  Should work, I think?? 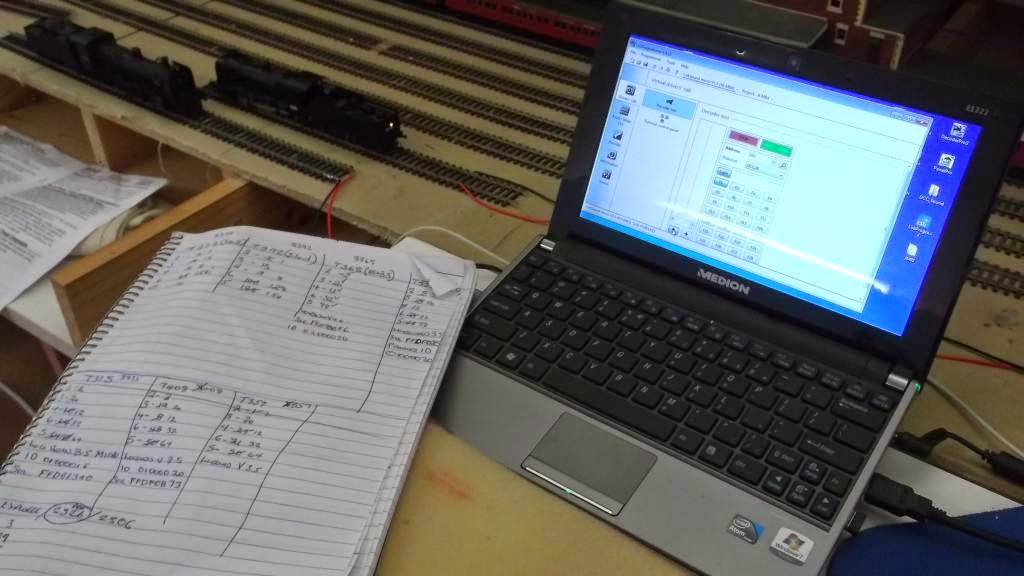 Write out notes and move to computer when I have got them right. 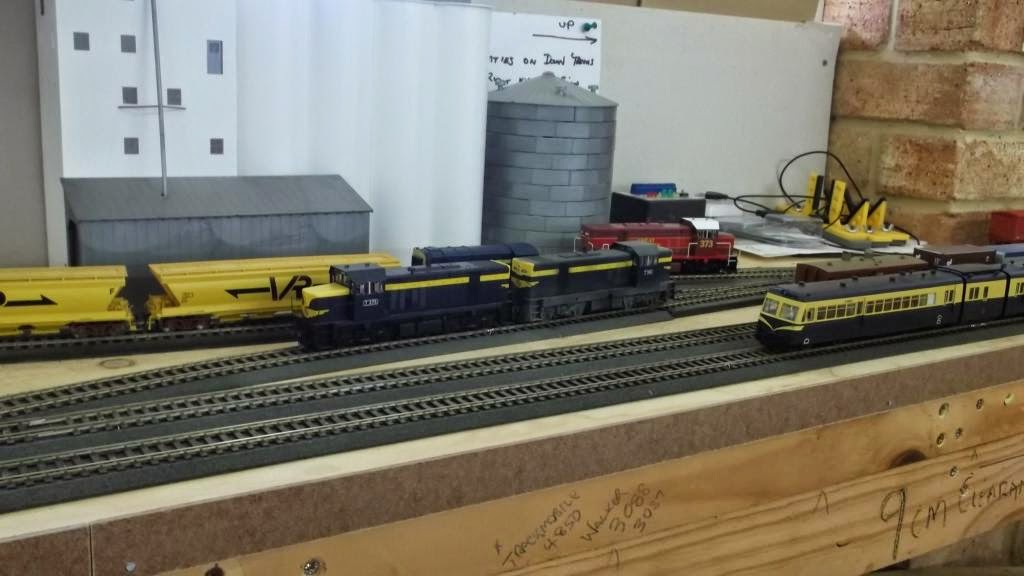 Walker is there because I just love the sounds :) The two Ts now run together. F Class waits a sound chip from Sounds of Australia (Thanks Mike) 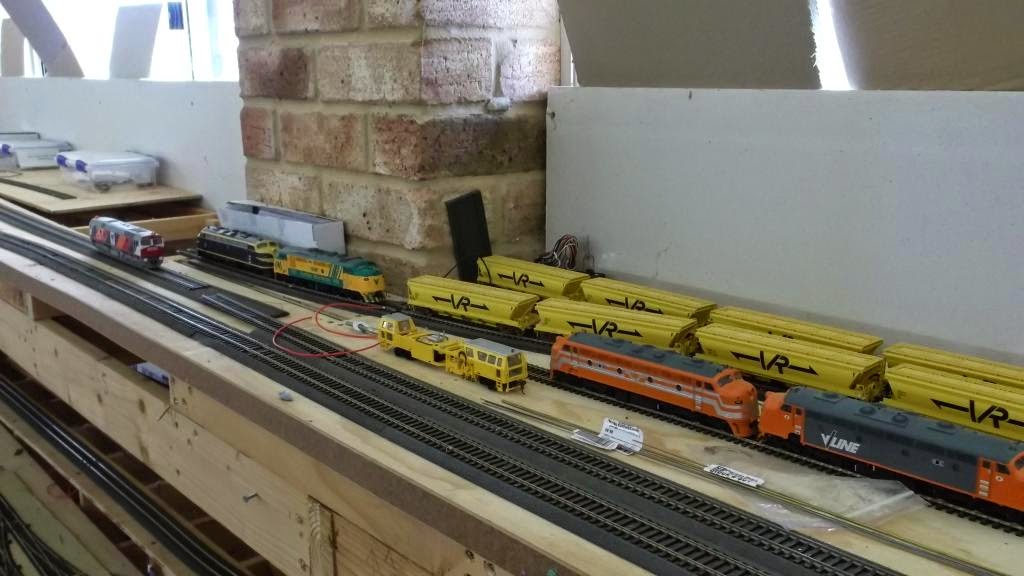 B's and A's all waiting sound chips. I have the chips, but thought up an easier way to fit speakers. Waiting speakers ;) 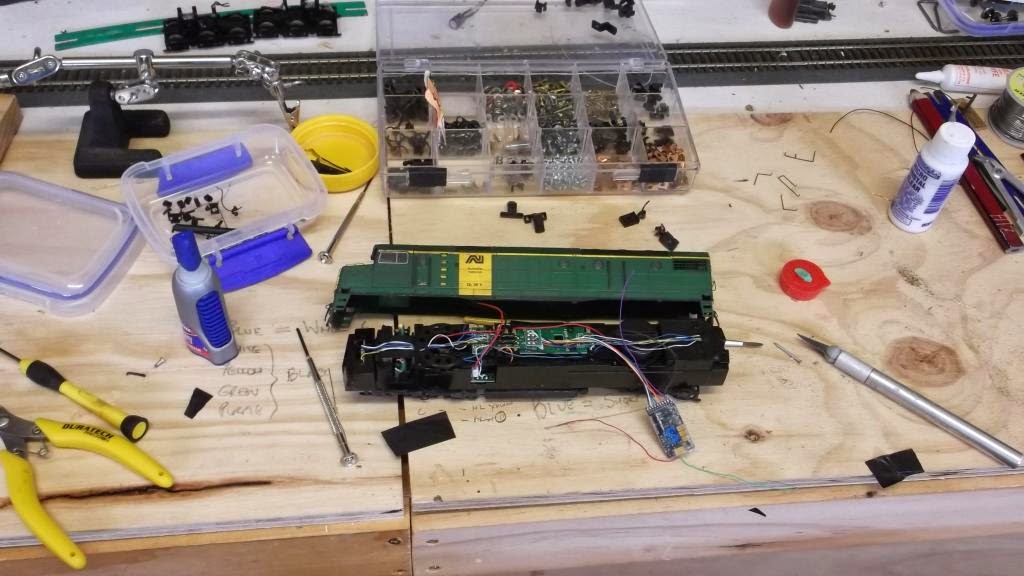 Tried to run DL, but missing chip. Swore I fitted one?  Anyway here it gets a Loksound Select chip, unfortunately with a 16 cyl 710, because nobody makes a cheap alternative for the DL. 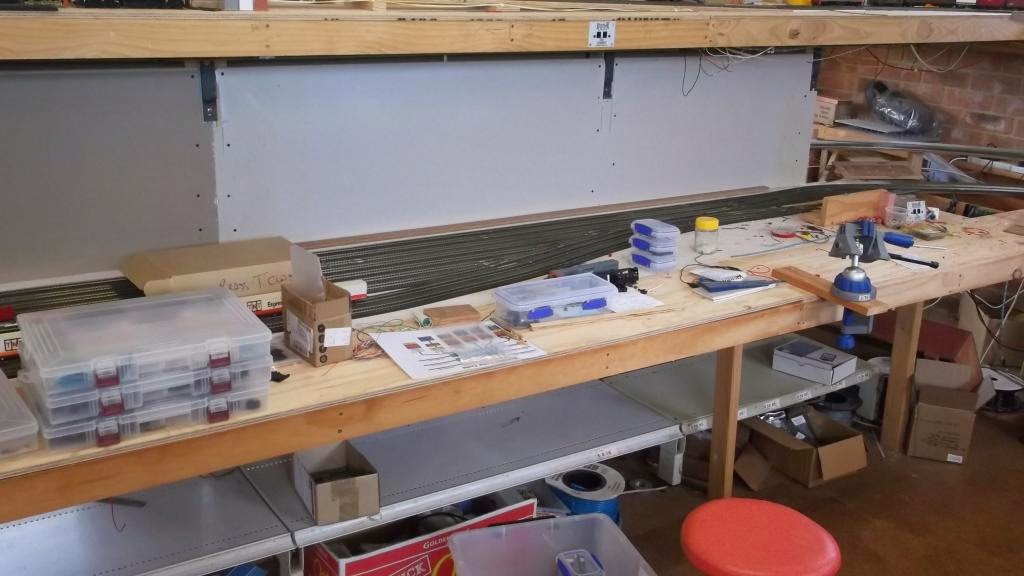 When I start a project and need parts I gather all the bits together and place them all in a clipper bin or storage box. Unfortunately after I order the parts they arrive and I should put the parts in the clipper bin they belong to, but rarely does that happen. I have a box of spares and a dozen bins with half started projects sitting around :( 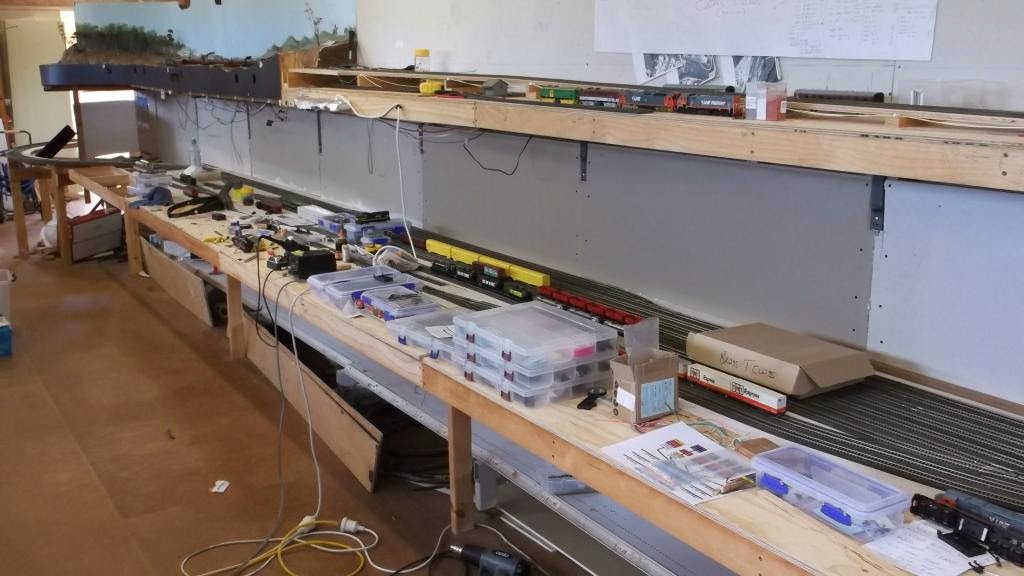 The recently cleared space in front of Wodonga Coal siding took about 2 days to reach the cluttered stage once again. And as fast as I put the locomotives back together again, more seem to take their place. 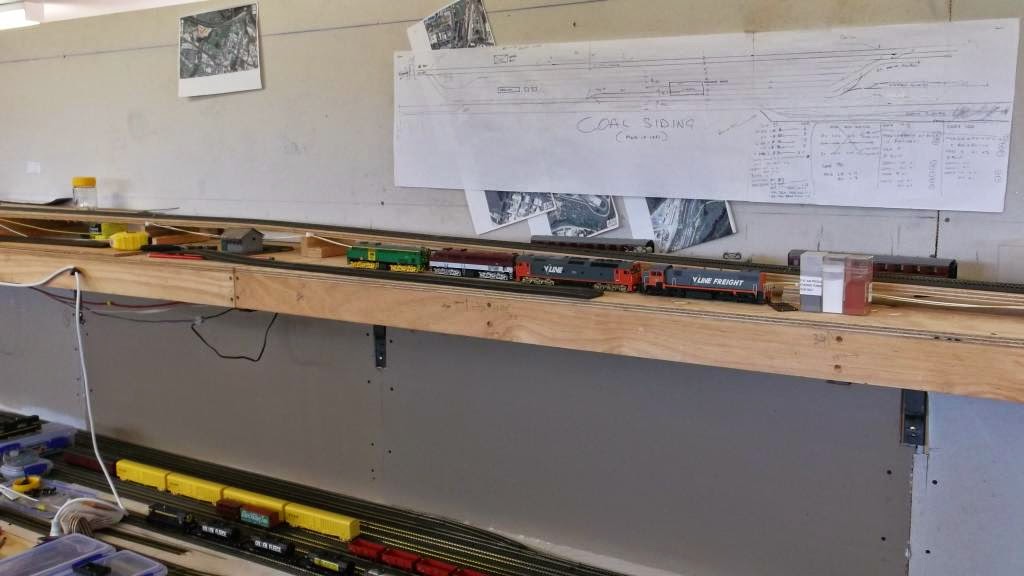 Another lot out of storage and into the queue. 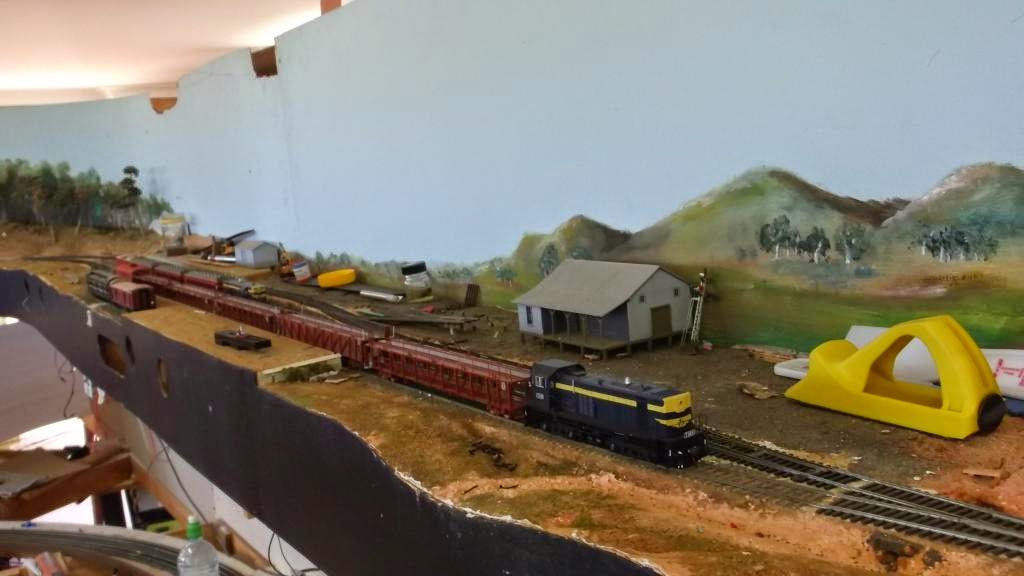 A load heads out to the Ford factory to pick up some falcons (probably drop them off at the tip? ;) 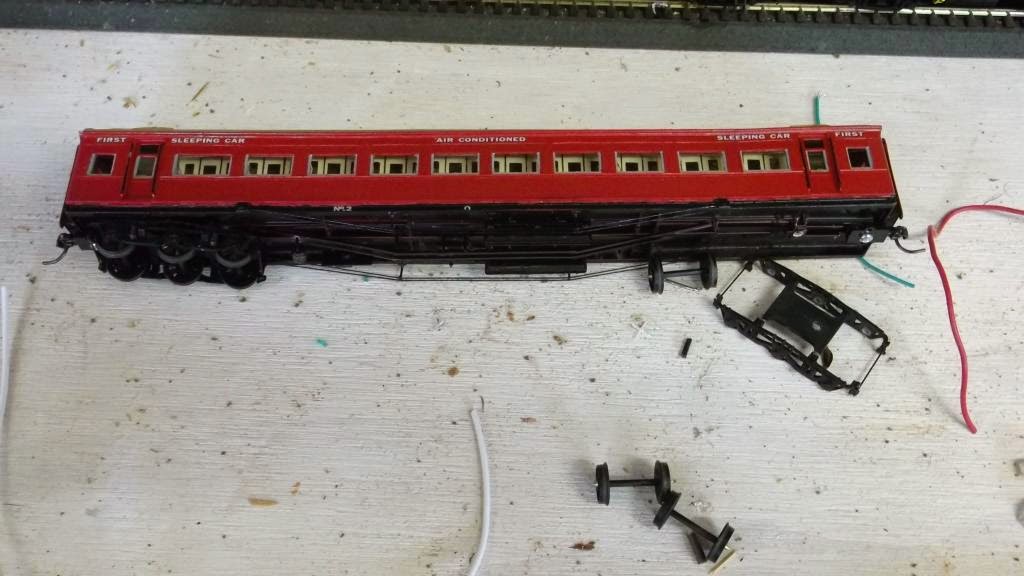 Took this one out of storage with my Auscision E Cars and found a very fragile bogie with loose wheels. Started sending off a few choice words before I noticed the coach was a SEM kit and the wheels were actually the flat pack SEM kit bogies. Really fragile! So order sent off to Auscision (sorry for the bad thoughts wrongly directed) and 5 sets of E bogies are on the way to upgrade all the SEM E cars

And now back out to the shed to fic that DL and if it does not get too hot, maybe fix the last of the polarity issues on the branch
Cheers
Rod
Posted by comtrain at 3:05:00 pm No comments:

Well Bathurst has come and gone and one of the young guns has done Ford proud. Lets face it, it was won by attrition and the second car home was patched up after hitting the wall twice, no less. I believe Volvo had it all sewn up, but one little mistake put him into the marbles and game over!
Nice to see Whincup ignore advice and run out of bio-fuel Ha Ha
But there is always next year.

Anyway if Bathurst is over then my Annual trip to Liverpool must have come and gone as well.

Enjoyed my time with Roger Lloyd and Tony Hough (of AMRA)
And my visit with Col Hussey.   His layout is coming along fine. It seems he has a new wind since recovering from his spinal surgery. Thanks for putting up with us Col.

Spent a fair bit of money I did not have, up there, especially as my car needed a major service and took an unexpected $4000 out of the kitty.

The layout is still moving a little day by day.

The wiring of the old  Threntham layout being used on the top level has brought me undone and the last week saw me undoing it all and starting again.  I finally fixed all the dead spots and trains can circulate through the two stations and back around the deviation at long last.

Most of the 4 wheelers were circulating without a problem through this rewired area, but when I tried to run the new BPL carriages from Austrains, they kept derailing, suggesting that it is not just the track (4 wheelers prove that) The BPL cars are very light and appear to be very unstable. Not sure if it is just weight they need?  Anybody else finding problems with them?

Well I think I might relay a few lengths of track tonight and see if that improves anything, before attacking the carriages.
Cheers
Rod