Al picked the back breaking job and paid for it. workaholic!

Fortunately I had already removed the reversing circuitry, even so it took 6 hours to set this piece of track in place and have trains negotiating through the new track.
I continued to back him up by soldering and connecting droppers, as well, I worked in the silo area over Wanganella and sorted out all the wiring there. Just a small job tomorrow connecting the bus lines and trains will be able to circulate once again.
After that connect up both sides of Wodonga Station, before running new track into Albury yard. This of course made possible by Evan (from Indonesia) who built the beaut wide radius double track Y crossover depicted here.
And Evan, it fits well and test trains run through better than Peco NMRA Code 83. Well done, mate. 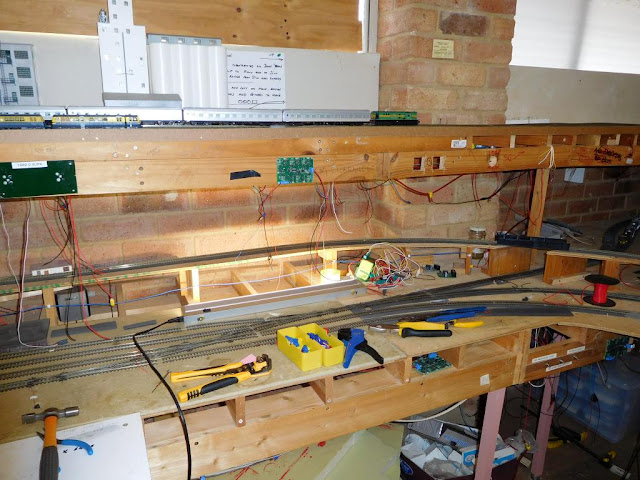 trying to sort out the permanent wiring, here, at the wheat silos..... Ha Ha... sorted, need to shorten and connect all droppers and tie it all up out of the way... Point motors are wired curled on bottom level) just need switches and motor controllers mounted. The 48 Class sits on the first dead section. All power tested working to this point. (actually a diamond crossover Ha Ha) Juicer temp installed outside, will transfer out of sight when wired and working. 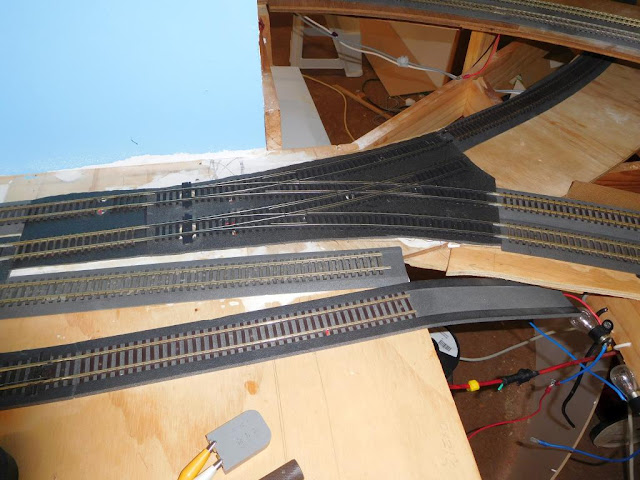 Evans home made double Y point. was tough to cut it in says Al, but it did fit exactly as we asked Evan. Well done both of you. Evan your point was electrically (and physically) perfect. At the moment it is working "dead frog, but I will connect a juicer over the frogs and make them live frog. 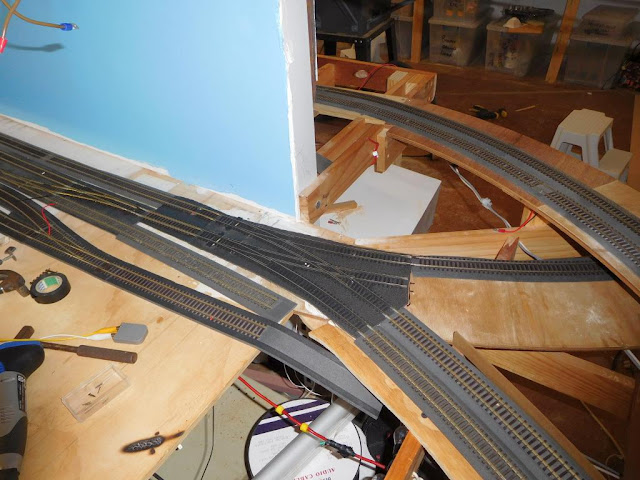 Speed testing on the Bg at least was perfect. Sg works to point of no more rail.

Thanks Al, I enjoyed our day today
Cheers
Rod Young
EDIT
Oh I forgot to thank SDS owner who stopped by to deliver my gas tanks, and VR OT tanks Wednesday on way home to Sydney.
Also Auscision who sent two of my car carrier packs, just two to come now.
And Ian Millard who sent me his two ESU decoders at a reasonable price.
Posted by comtrain at 10:55:00 pm No comments: