2019_12_28  Hoped to be testing trains by now. Al came again last Thursday and we sorted out some point motors and some track problems.

Decided to use a pair of Tortoise Motors under the layout in a place difficult to get to, and one went in just fine, however the second one would not run in one direction. That is the motor rotated, but the pin was not able to push the point over. It was a little stiff, but not enough to stop the movement. I walked away, hoping to find a solution another time :(

Lets use a picture story as usual. 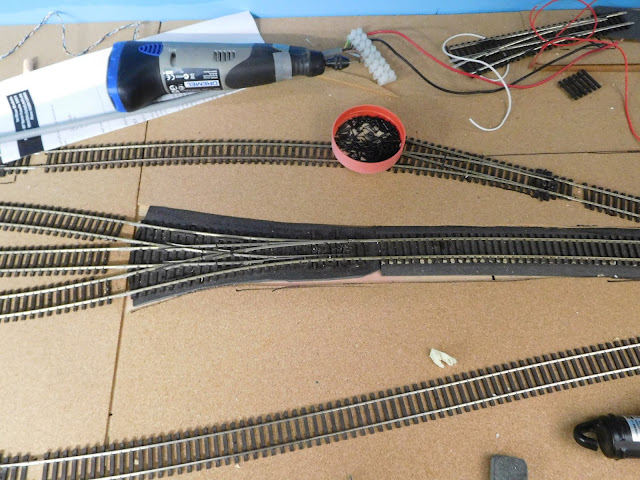 Here is the throat of the SG entering Albury. I used a three way point (against all advice) because I had a space problem. How could Peco make a dud product, and over many years, not fix it ??

Anyway the radius is a bit too tight and Pass cars will not run into the left or right side. Freight and Locomotives seem to be ok. The pass cars will not pass through in either direction. I think I will have to introduce two points here, and I might just have enough room if I use a medium to the right and a large left into the platform. I am about out of points, so I will have to do a search, before making my decision. 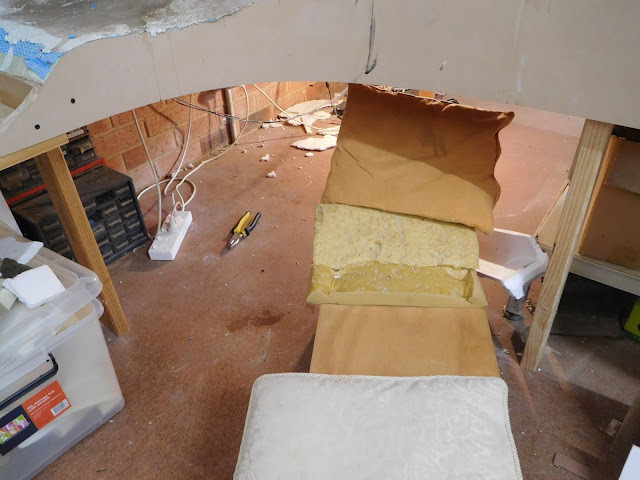 Under here I am supposed to be able to access the hidden areas screened off or in tunnels. The trolley makes it easier, just. 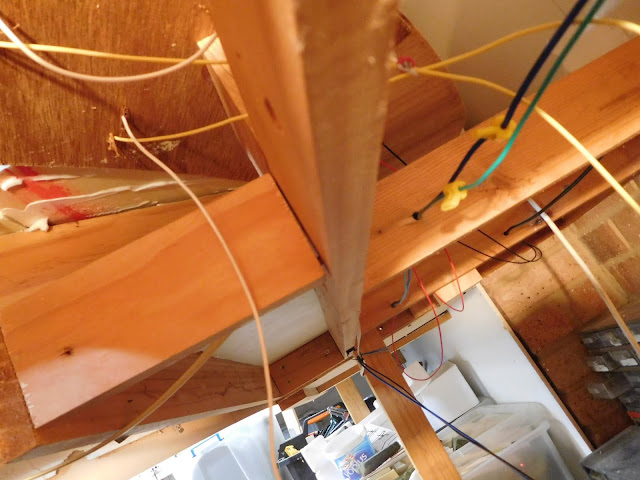 The problem is that trains stop half way through the tunnel, and the cause was most of the droppers were not connected. And so I connected them and immediately caused a short. and I supposed the short was caused by some droppers being on the wrong bus, however I got rid of that short, and created another when train came out of tunnel and entered the Indonesian point.  If it smells like a reverse loop (Al was right)  and flat on your back on a trolley, puffing and panting, it may NOT look like one....  but it was! 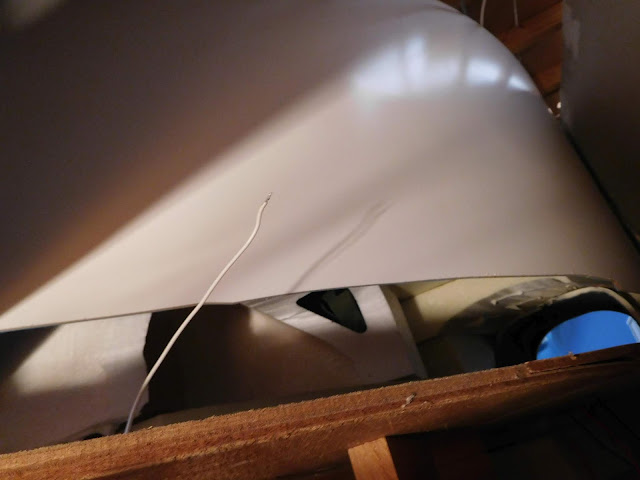 So moving wires around to create a long reversing section, I pulled with the plies to un clip a dropper and pulled this dropper off the rail... oh no flip flip flip!! 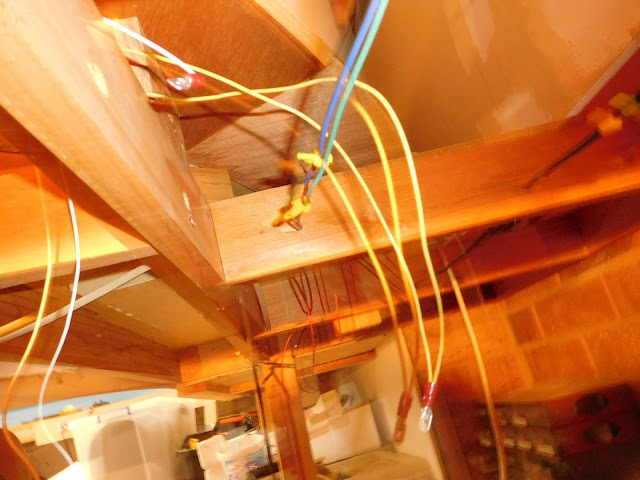 This photo was supposed to show the area that was available for me to get up inside and re solder the dropper. 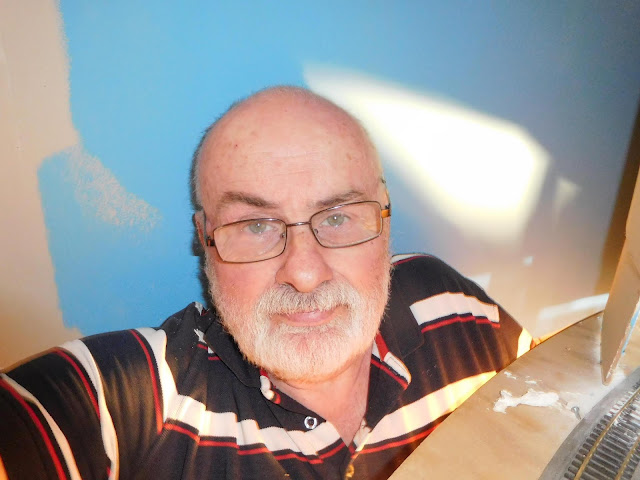 the space between the supports was enough, however the heavy bus wires restricted me somewhat. I am on my own today, do not have my phone within reach and only have one hand free. which is holding the camera! oops it clicked and no time to pose Ha Ha.  However neither picture shows the predicament I found myself in. 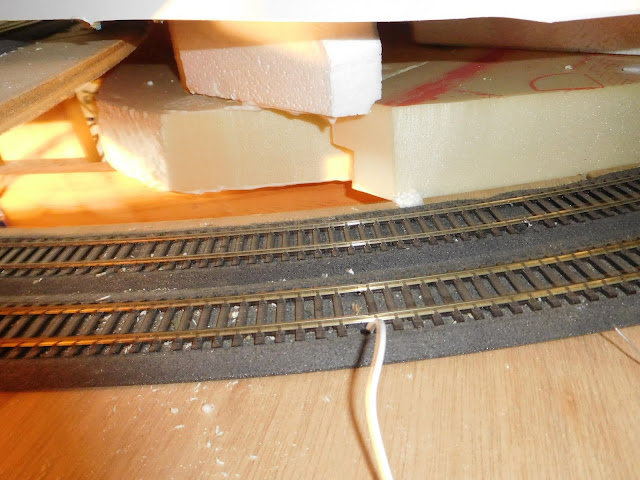 Now the soldering iron was sitting on a box behind me, and I had the solder in my pocket. As I reached around behind me, I could feel the trolley starting to move. Finished up getting the iron, without burning my hand and somehow threaded my trapped arm in close enough to hold the wire to the rail. It was tinned and stuck firmly with first touch. I gave it a heavy tug, just to make sure. 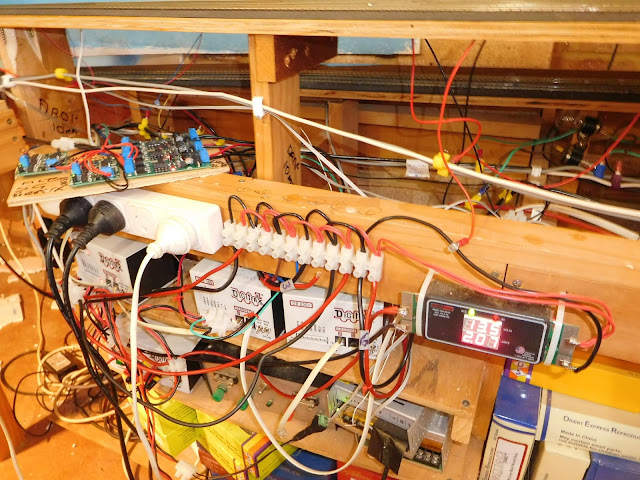 So now I need another circuit breaker, and here is my very last NCE EB1 added to the board top left. 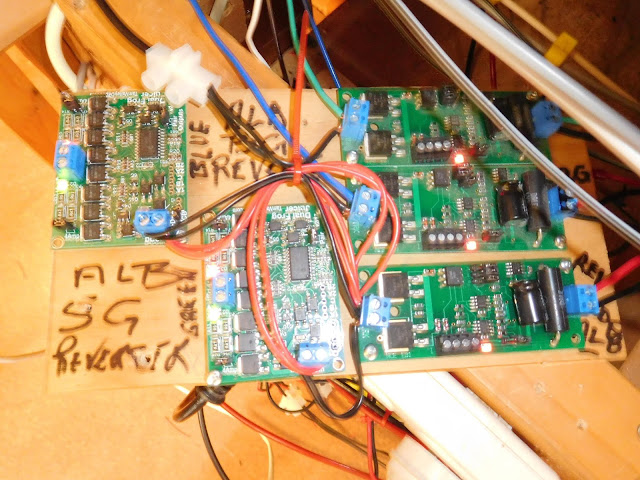 blurred bugger!   Too hot to go again to get another But I moved the Albury BG and SG c/b's up and added a third for the reversing loop.
Also moved all three EB1's t right to allow room for two dual Juicers converted to reverse loop controllers. They are shown on left.
I used two here because one did not work completely under the helix at Albury. If you enter from two directions it shorts out. The two tracks between coal siding and Albury will need to be fully independent.

The Digitrax system is extremely quiet no warning unless it purges an address.. 3 beeps.Cheers
Rod Young