Power is now routed out of Allandale and works to the second points arriving Bullarto..   and an area that has worked well since we re-laid the track here is now a short circuit and it is only when the point lays toward the platform.  Only after I climb on the stool, is it all revealed. We installed a code 70 shinoharo point here, because I ran out of the scaleways right hand versions I was using....

And I forgot to cut it up and make it DCC friendly.  I have no idea why it did not fail during installation?? Perhaps I did not test it? 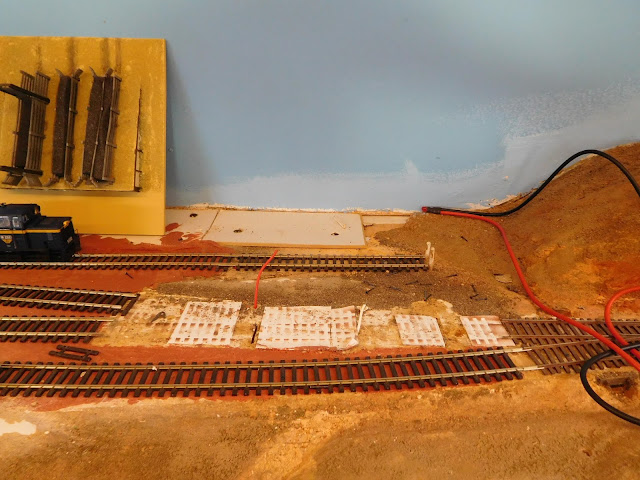 Hoping I have not messed up all the packing Al, painstakingly leveled the point with.  :( 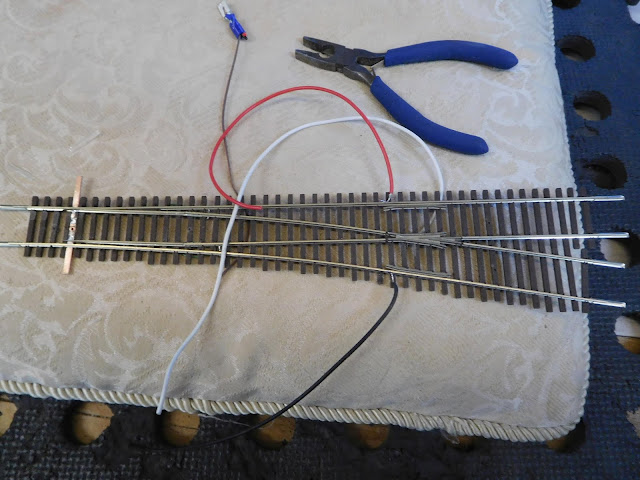 Anyway I found another point with a broken throw bar. Repaired it and fitted it in. It was an exact replacement for the old shinoharo. Note the frog is a casting and is not connected. A dead frog. which allows most locomotives to cross with out interruption.  But I do attach a wire to it and convert it to live frog via a Tam Valley juicer or a switch on the point motor.
Point installed and tested ok.
But thats not the end of this. Moving over to Trentham where I have found more dead track sections. Thats for next time and will be much easier.   Wow I am nearly there!

McKenzie and HoLland were in attendance this weekend. 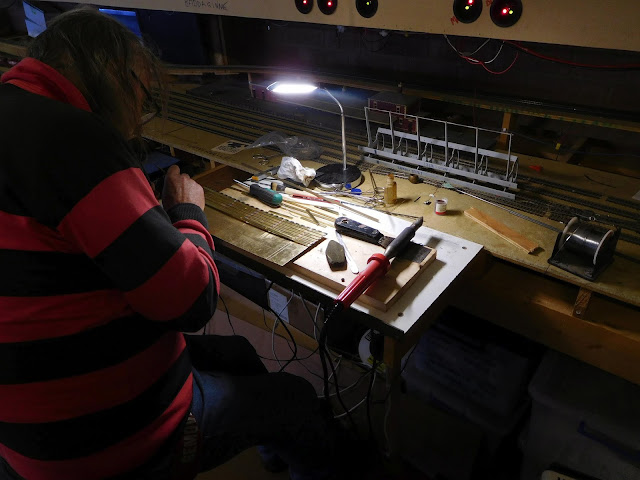 Tony works on the locking tray. 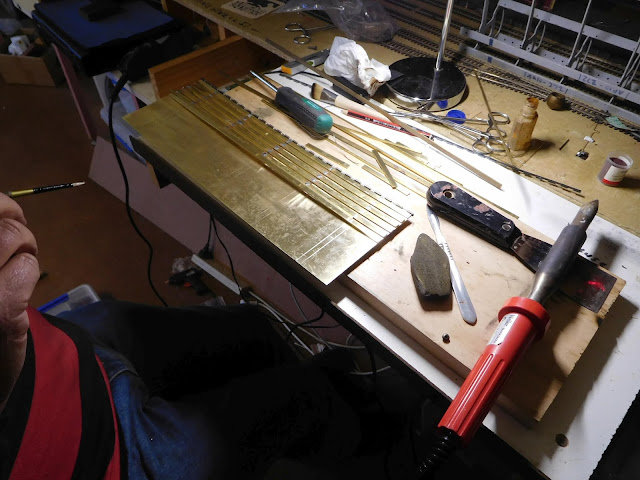 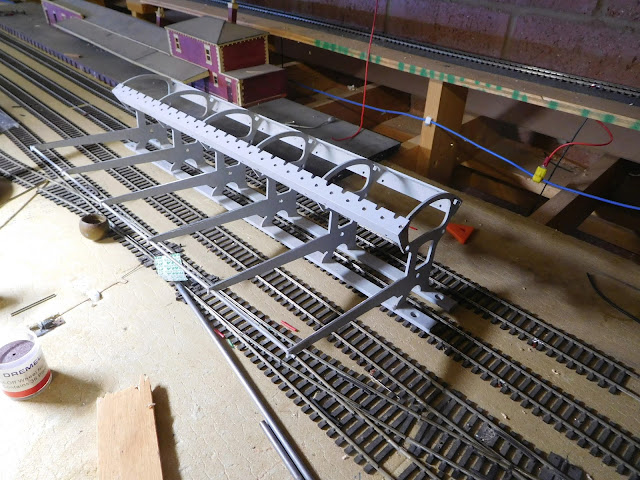 The first part of the birthing process The basic frame Eh? zygot?? 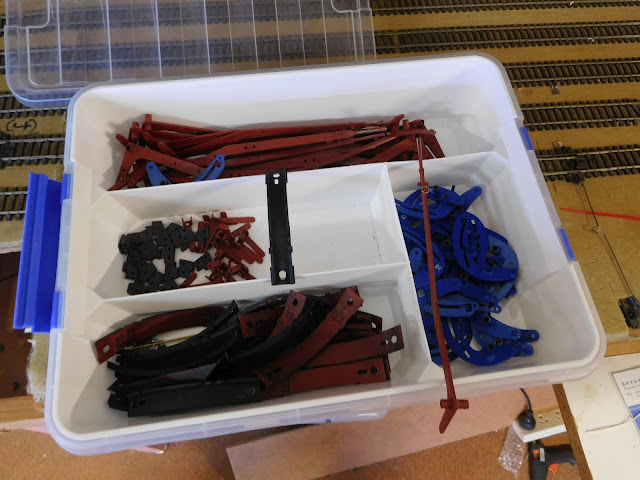 The bits bin.  Looks like a Mechano set, sort of? 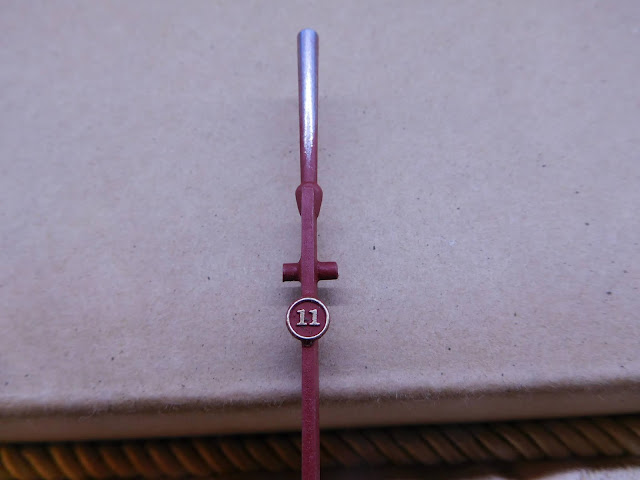 The first part of the lever  with a number already installed. 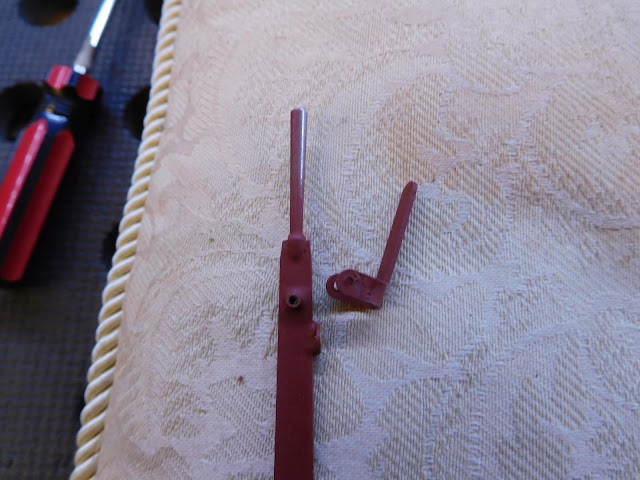 It needs a handle pinned on, a rod to unlock it and a spring return, before installing it to the frame. 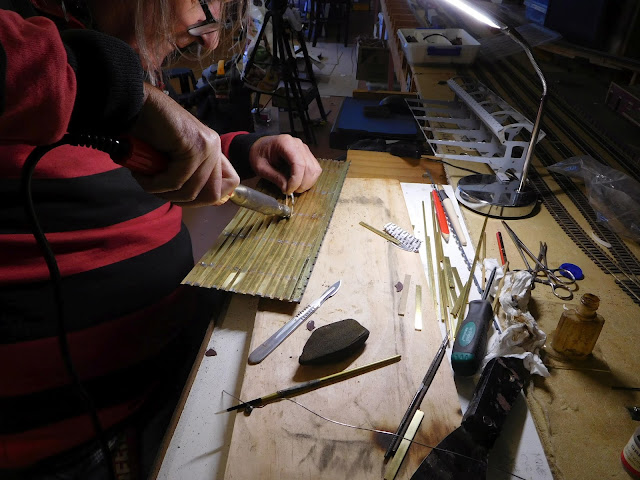 Tony is moving along. Only one burn this time when he disrespected BIG Bertha!

On Sunday with Tony returning to his home, I got a visitor from the other side of the "Cold Wall"

Playing with back drops? At least painting them. 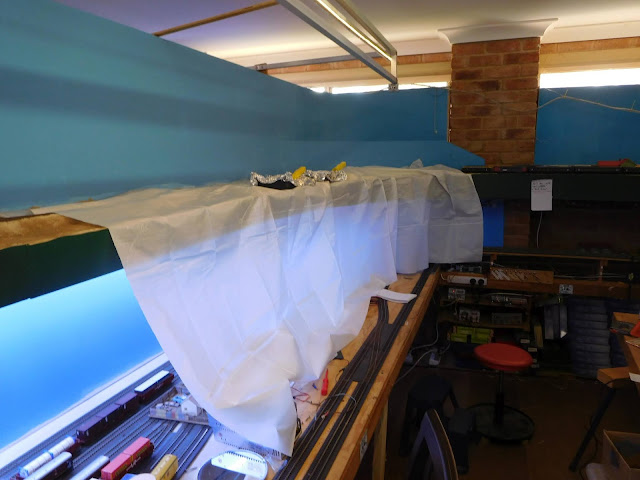 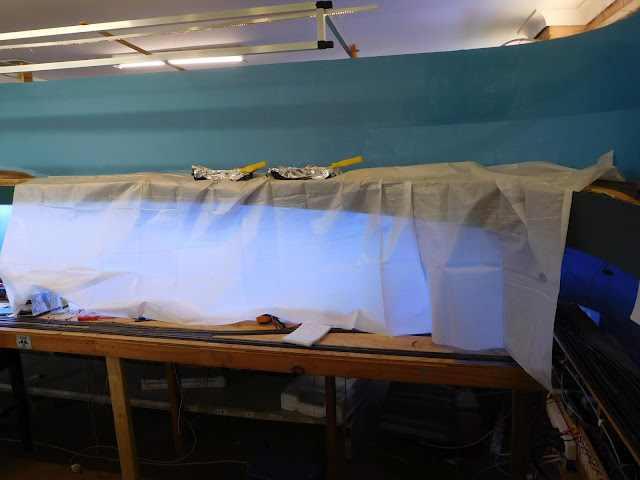 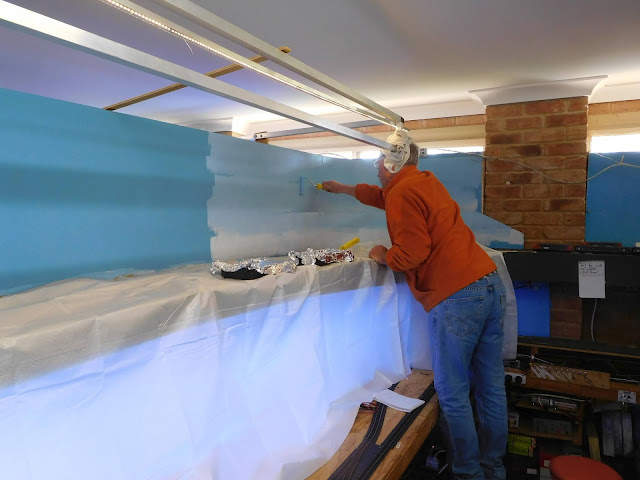 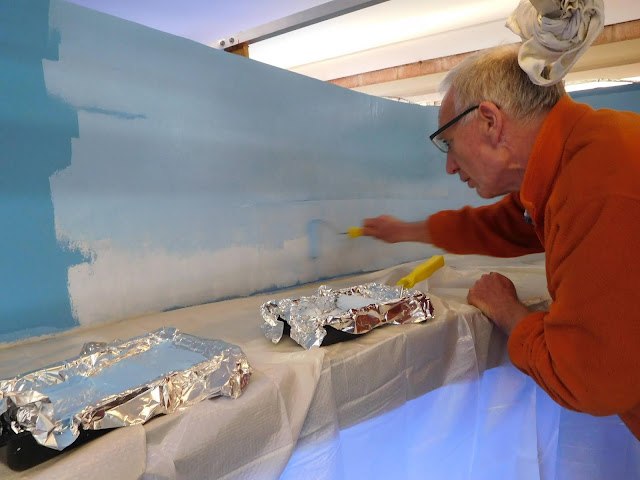 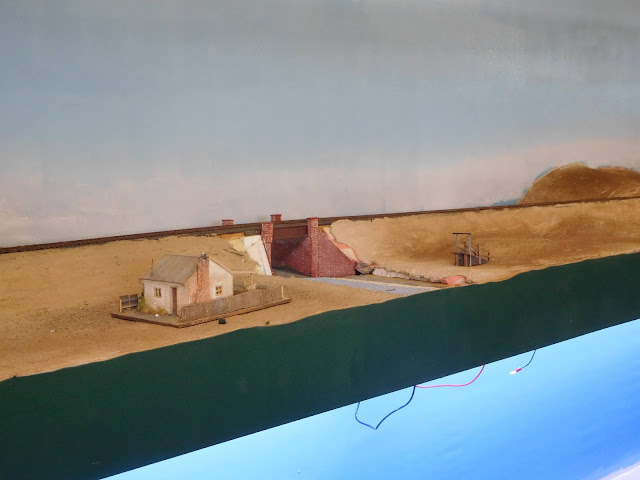 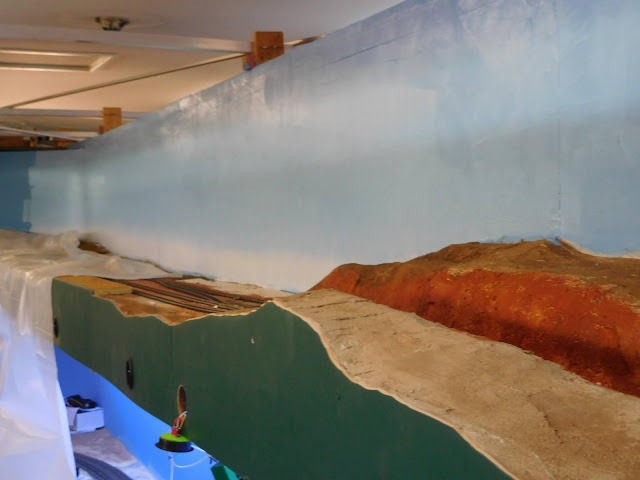 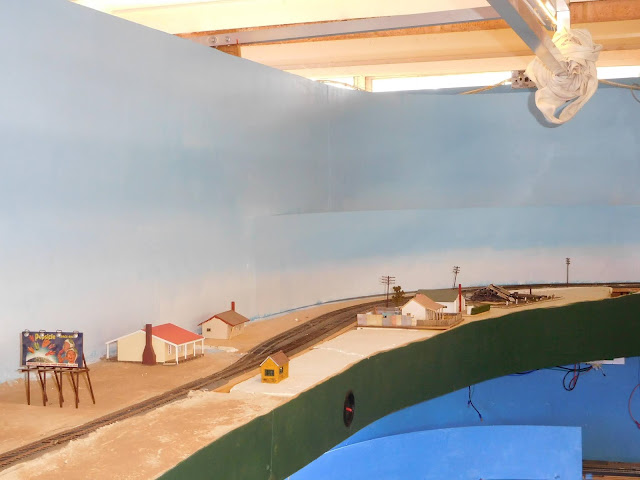 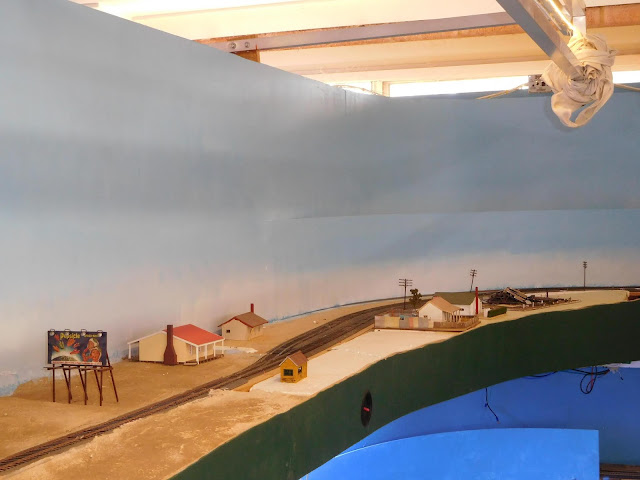 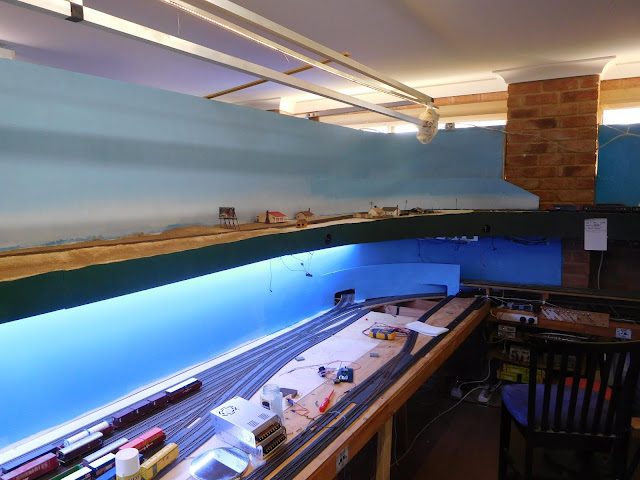 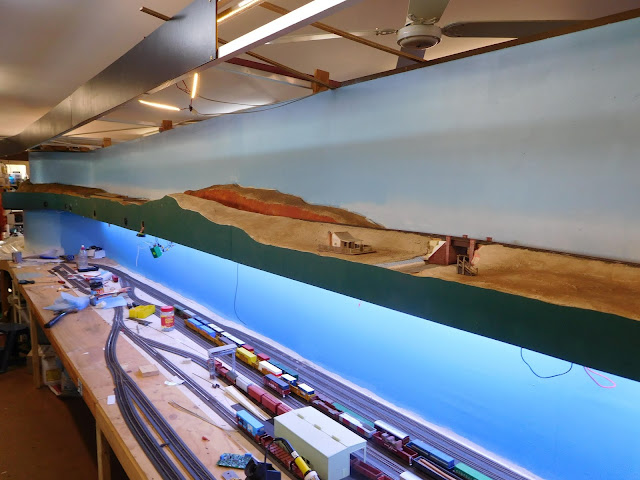 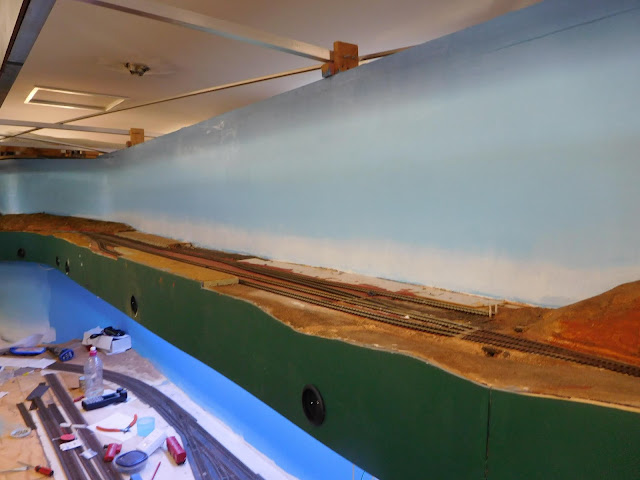 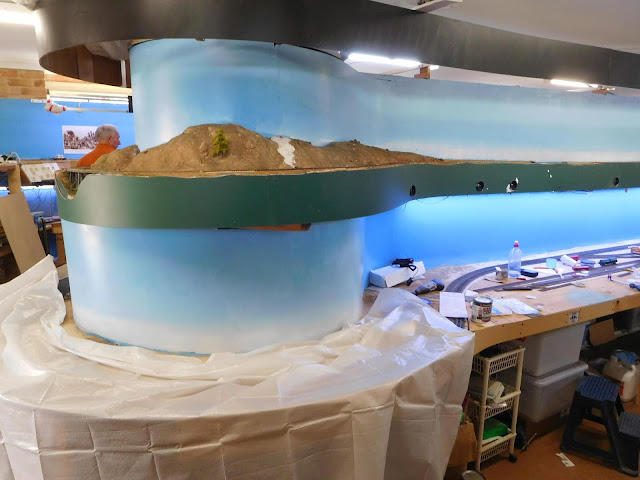 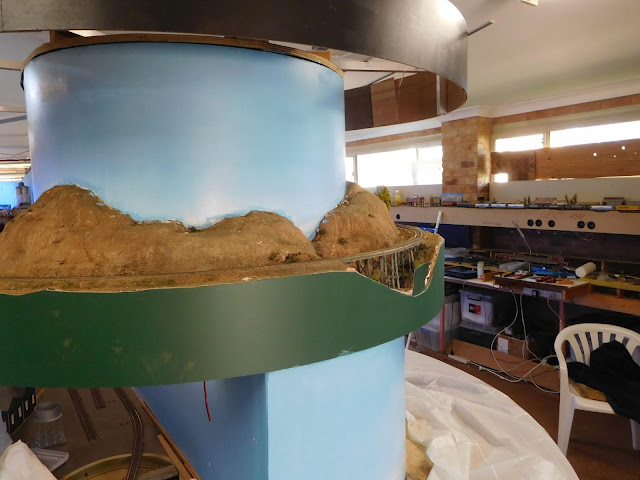 The blue is the same darker blue used to paint the wall. The white had a little black mixed with it to simulate clouds.  In this case to lighten the blue.

The two rollers were used in matching paint trays, however they were allowed to contaminate each other on the wall.   This allowed the sky blue to lighten close to ground and get back to blue higher up. This should help to create some distance after we cut out back drop pictures and adhere them to the bottom of the boards.

I bet you know we are not looking forward to this attempt after all our failures.Thanks Graeme for all your great ideas :D. I like this effect